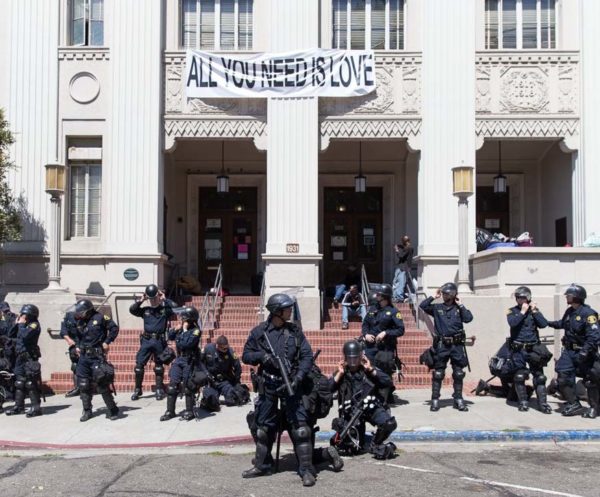 We no longer have anything in common as citizens of the USA or EU. Once we did, because we were born of a common root and shared a culture, but now we are merely those who attend a legal, political and economic system.

Arising from our pursuit of ideology, the notion of America as merely a system flourished for some time, but now has died, raising doubt about the question of unity as a nation:

It was Sept. 11, 2001, that sent existential concerns slamming into American speech. But there was something new, something dissonant, in the way we began to use the word â€” a change meant to accommodate the idea that just 19 men might strike at a nationâ€™s being. Weâ€™d been exposed to an event people found truly unimaginable, one that shifted their sense of the world and what seemed possible in it. And yet, disorientingly, day-to-day American life continued. No armies massed on the countryâ€™s borders. The nation felt itself plunged into momentous conflict, and yet so much of that conflict existed somewhere else â€” not just in remote places but in abstractions and arguments over what developments, far from any battlefield, would indicate that â€œthe terrorists have won.â€

…For white nationalists, an America in which minorities mingle and miscegenate and share power with whites is an annihilating, nation-ending danger; for others, America cannot be itself until that happens. For the conservative columnist and radio host Dennis Prager, writing for TownHall in July, â€œleft-wing-dominated media and universities pose an existential threatâ€ to Western civilization â€” not because they seek to raze cities and scorch the earth, but because they envision it in ways Prager declines to recognize as the thing itself.

Any nation in which “minorities mingle and miscegenate” is a genocide factory. It takes in ethnic groups, and spits out people of no ethnicity. This fits with the Leftist ideal of removing inner traits — intelligence, moral character, race, intuition, faith — and replacing them with an external trait, namely the social ideal encoded as prescriptive philosophy that is ideology, and since this is based on human preference (“social”) rather than feedback from reality, it is always wholly individualistic and manifests as egalitarianism, or the rule that no individual can be seen as lesser than another for understanding less of reality.

In other words, the individual demands to be aided by others, even if they have not made a contribution. Consider how this contrasts the roots of civilization:

For many researchers, our cruelty to â€œthemâ€ starts with our kindness to â€œus.â€ Humans are the only animal that cooperates so extensively with nonkin, and researchers say that, like big brains, group life is a quintessential human adaptation. (In fact, many think big brains evolved in part to cope with group living.) Studies of living hunter-gatherers, who may represent the lifestyle of our ancestors, support this idea. Hunter-gatherers â€œcooperate massively in the flow of every imaginable good and service you can think of,â€ says anthropologist Kim Hill of Arizona State University (ASU), Tempe, who has studied hunter-gatherers for 35 years. â€œAnything you need in daily life, the person next to you will lend you: water, sticks for firewood, a bow and arrow, a carrying basketâ€”anything.â€

Thus the group buffers the individual against the environment. â€œOur central adaptation is to group living,â€ says psychologist Marilynn Brewer of the University of New South Wales in Sydney, Australia. â€œThe group is primary.â€

A few elaborations: first, the group is not primary; social order is. The reason that hunter-gatherers — and really, people in every type of non-modern civilization — aid each other is that they are sharing a task, and it benefits all to have more hands on deck. People are a scarce resource, and if you are going to hunt, make shelter, prepare food, or otherwise support a society through productivity, mutuality within the group is essential because it makes each person more efficient through delegation of tasks and specialization of labor.

In order to support that, social order emerges. With social order, you have some leaders, and some whose judgment is generally respected, so you achieve both hierarchy and caste. In addition, the basic formula of civilization appears: those who are willing to contribute to productivity are to be aided; those who are free-loading, or subtracting productivity, are to be hated. In addition, the group needs to be xenophobic and paranoid about outsiders because for the group to establish its standards, values and genetics, no competing versions must exist nearby; realists recognize that every group wants to dominate all others unless sufficiently removed from them that the task of conquest entails much burden for little reward.

Even in the years after our hunter-gatherer days, which really might simply be termed a time of nomadic civilization, this principle applied. Those who contributed were aided; once wealth was abstracted into gold and later ownership of businesses or farms, a general notion arose that people should be compensated according to the degree of their contribution, which was measured in the ability to make intelligent leadership decisions more than labor-by-the-pound.

Leftism — individualism — emerged in reaction to that condition. The Leftist wants reward-before-productivity, and they want to remove the system by which people are measured for their abilities. This is the desire of the individual for pacifism; he wants to eliminate the possibility of being lowered by his own failure, whether in battle or in daily tasks in which he will either demonstrate a knowledge of reality or a lack thereof, and by that will be assigned a status somewhere in the hierarchy.

This reveals the great secret of the Left, which is that despite their method of collectivism, they are fundamentally malignant individualists of the type we normally call “parasites,” but ironically, it is not because they cannot contribute, but because they fear their contributions will be insufficient. In this lies the key to defeating them: when you give them other tasks to do in which failure is anonymized, then they have only positive gain because of the “opt-in” nature of this new pursuit, and their fear of failure is alleviated; ironically, a caste system does this by assigning them to roles in which only egregious failure is punished, which gives the 80% who are functional a position that requires very little effort to achieve and maintain, freeing them up to spend more time on the rest of life. Interestingly, it does this without requiring novel changes to society so that there are always new opt-in pursuits to join.

Once we understand that social order is the root of civilization, and that individualism opposes social order, it becomes clear why America has fragmented entirely: the Leftist vision — including diversity — divides us from the sense of mutuality through shared purpose, and replaces it with obligation, or assigned tasks under the threat of social disapproval and possibly ostracism if one fails to do them. With individualism, there is nothing left but power, control, commerce and the chanting mob calling for your head on a pike.

The position someone holds in society — defined by social status, rank and hierarchical level — then, contrary to appearances, grants people stability and freedom from control, where individualism, also visually paradoxically, leads to dominance, control and rule by commerce. Diversity came about as a Leftist social weapon against hierarchy, because if you erase race and ethnic group, obliterate heritage and values, and mangle faith, language and memory, you create equal identical people who can be molded much as we shape products in a factory.

With diversity, Americans no longer had the mutuality necessary for civilization. Black people would look over at white people and wonder if those people were acting for the benefit of their own group, and not for the shared group created of political, economic and social boundaries. As it turns out, blood will out; people act not only for their own race, but for their own religion, ethnic group, political leaning, caste, region and class. They will, for a time, act together for so long as it is perceived that they share a common purpose. However, this does not last, and so diverse societies quickly fragment or self-destruct through endless caste warfare.

Americans adopted diversity in its most recent form because they believed it would end class warfare caused by racial, ethnic and caste differences in ability because of the genetic differences between those groupings. The Left likes to tell us how these divisions are “social constructs,” but that is deceptive because all language is a social construct; we notice similarities between things, group them into a category, and give that category a name. When language is used well, it groups people by the right traits, and the time-honored use of ethnic terms suggest that is true; when language is used poorly, it reflects the needs of the person coining that language, and focuses instead on political or external characteristics of groups like ideology, for example.

Internal characteristics are useful because they cannot change. You cannot alter your genetic code, and if that ability ever becomes possible, those who take advantage of it will be viewed with suspicion; to alter your genetic code is to hate your roots, which means without exception that those roots were bad which means you are bad and trying to hide that fact. In the same way, those who hate their own race or ethnic group have some actual reason for that hatred, in contrast to whatever reasons they state, which is most likely that they are broken and hate their roots as a result. If your roots made you broken, you would hate them as well. Internal characteristics like race, ethnic group, caste, moral character, intelligence, class and intuition allow us to act in good faith within the context of mutuality.

In the 1990s, America finally got onboard with the diversity agenda, since we no longer had a real fight — against the Soviets — and were now focused on fighting each other, which we did by “keeping up with the Joneses” on an ideological level, since WW2 and the Cold War had shifted us from being an organic nation based on realism to being an ideological nation based on politics and economics. In 2008, this new diversity elected Barack Obama; in 2016, amidst a downpour of other anti-globalist actions worldwide, the Obama agenda was rejected because of the disasters it created, Soviet-style, in manic pursuit of ideology even when it contradicted reality.

For us this means a seemingly uncertain future, but even that is human pretense. We know what the future holds: it turns out that diversity was wrong, in the sense of being a policy based on unrealistic/incorrect principles, and therefore, it is ending. People are pulling away from each other not just by race, but by ethnic group, religion, caste, politics, region and class. Two hundred years after we began this experiment, we have our answer: civilization requires both genetic commonality and hierarchy for mutuality, or it self-destructs.

Harvey (((Weinstein))) and The Indulgence Industry | Another Mistaken Meme