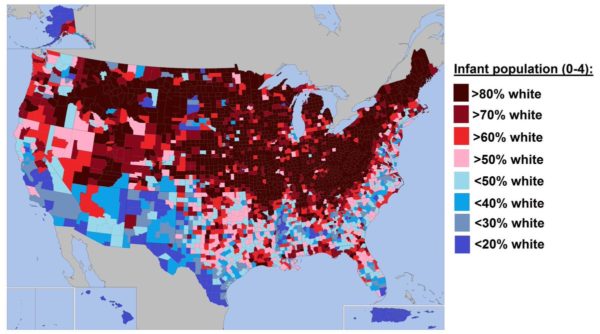 For 200 years, nearly the entire duration of the country, America has been wracked by race. We write more about it than any other single, consistent political topic.

For the last 50 years, Europe has joined us.

For 2500 years at least India has wrestled with this issue; it is known also in China, to a much lesser degree, and was known in ancient Greece and Rome, particularly shortly before they dropped off the radar of history.

Why? Diversity, or multiculturalism, is a subset of a larger issue: how to maintain social hierarchy not through government but through inherent acceptance and desiring of the same goals and values.

Of course this issue is intertwined with social class; lower classes in every nation are those who are more prone to put their desires before their obligations, usually as a result of low intelligence. (You’ll probably object to me saying such a blunt and impolitic truth, but you have no problem paying Juanita the maid $10 an hour or buying those Chinese goods made by workers getting $4/week. Hypocrite, heal thyself.)

And yet we cannot face the truth of this issue, which is that diversity in any form does not work.

The problem is not blacks, or whites, or any other ethnic groups — it’s that combining them destroys cultural consensus and shared values, which are genetically encoded in every population, by averaging two or more distinctive and different cultures.

Cultural and genetic evolution are intertwined. The human capacity for culture — a strong tendency to learn from each other, to teach each other, and to build upon what we have learned — is itself a genetic evolution that happened in stages over the last few million years. But once our brains reached a critical threshold, perhaps 80,000 to 100,000 years ago, cultural innovation began to accelerate; a strong evolutionary pressure then shaped brains to take further advantage of culture. Individuals who could best learn from others were more successful than their less “cultured” brethren, and as brains became more cultural, cultures became more elaborate, further increasing the advantage of having a more cultural brain. All human beings today are the products of the co-evolution of a set of genes (which is almost identical across cultures) and a set of cultural elements (which is diverse across cultures, but still constrained by the capacities and predispositions of the human mind). For example, the genetic evolution of the emotion of disgust made it possible (but not inevitable) for cultures to develop caste systems based on occupation and strongly supported by disgust toward those who perform “polluting” activities. A caste system then restricts marriage to within-caste pairings, which in turn alters the course of genetic evolution. After a thousand years of inbreeding within castes, castes will diverge slightly on a few genetic traits — for example, shades of skin color — which might in turn lead to growing cultural association of caste with color rather than with occupation. (It only takes twenty generations of selective breeding to create large differences of appearance and behavior in other mammals.) In this way, genes and cultures co-evolve; they mutually affect each other, and neither process can be studied in isolation for human beings. – The Happiness Hypothesis: finding modern truth in ancient wisdom, by Jonathan Haidt, page 233

This is what paleoconservatives called “race-culture theory” for centuries before Dr. Haidt so helpfully recorded it. In the conservative view, societies splinter by ability, with the wisest going to the top (aristocrats) and the intermediate becoming a middle class, with the lowest classes and castes reserved for those with few skills, low native intellience and/or low conformity or awareness of the moral standards of the society.

“Behavioral scientists routinely publish broad claims about human psychology and behavior based on samples drawn entirely from Western, Educated, Industrialized, Rich and Democratic societies.” The acronym there being WEIRD. “Our findings suggest that members of WEIRD societies are among the least representative populations one could find for generalizing about humans. Overall, these empirical patterns suggest that we need to be less cavalier in addressing questions of human nature, on the basis of data drawn from this particularly thin and rather unusual slice of humanity.”

As I read through the article, in terms of summarizing the content, in what way are WEIRD people different, my summary is this: The WEIRDer you are, the more you perceive a world full of separate objects, rather than relationships, and the more you use an analytical thinking style, focusing on categories and laws, rather than a holistic style, focusing on patterns and contexts.

Now, let me state clearly that these empirical facts about “WEIRD-ness”, they don’t in any way imply that our morality is wrong, only that it is unusual. – The New Science of Morality, a talk by Jonathan Haidt

Facts don’t judge morality as right or wrong; its effects, such as the rise or fall of empires, can be measured a thousand years later to gauge how effective that morality was.

But his point is interesting:

Cultural consensus is itself based on patterns and concepts, namely the idea that an “order” of adaptation to nature exists for that culture, and that we all fit within it and work toward it. Only in the rich industrialized liberal-democratic West are we working toward a tangible manifestation of that, the individual.

So we have race-culture theory, and what opposes it, the modern individualism.

In another lecture, Haidt expresses how this connects to race/ethnicity:

The ingroup/loyalty foundation supports virtues of patriotism and self-sacrifice that can lead to dangerous nationalism, but in moderate doses a sense that “we are all one” is a recipe for high social capital and civic well-being. A recent study by Robert Putnam (titled E Pluribus Unum) found that ethnic diversity increases anomie and social isolation by decreasing people’s sense of belonging to a shared community. – What makes people vote Republican?, by Jonathan Haidt

This is why diversity doesn’t work: morality binds us together toward a goal, and ethnicity encodes that binding in our genes, so that we then recognize any appreciable divergence — Haidt puts it at 20% approximately — will fragment that consensus and cause our society to collapse, much as Plato intimated it would.

This is why diversity doesn’t work. As this young woman found out:

Neely Fuller, Jr. basically says that if you are white and you are romantically/sexually involved with a nonwhite person, you are guilty of being the worst kind of racist. He likens it to an adult being involved with a child, because of the power differential. He says that a white person who is romantically connected with a nonwhite person is contributing to that person’s confusion and self hatred , and that any children produced from that union will be hopelessly lost in terms of self identity.

In Trojan Horse, the anonymous authors say that interracial relationships, particularly between Black men and white women, are one of the tools of destruction used against the Black collective by the system of white supremacy. They believe that an increase in interracial relationships will destroy Black society, and lead to the eventual extinction of Black people because the child produced by such a union tends to identify more with white people, and will marry/bear children with white people, thus producing offspring that appear to be white.

Now, as most of you know, I do date Black men. There are two main reasons for this choice. First of all, I am not attracted to white men, physically, mentally, or emotionally. Secondly, I cannot see myself being in an intimate relationship with a white man (whether sexual or platonic) because the fact is that MOST WHITE PEOPLE ARE RACISTS, and I do not wish to spend time in the company of hate filled people. In fact, I do not really associate with white people in general, except for my own family, and even that is kept at a bare minimum. All of my male and female friends are people of color. – Am I Contributing to the Destruction of an entire race?, by Joanna

This issue has never gone away because we have never found a way to solve it. That is because the way to solve it, a recognition of hierarchy, violates our post-Enlightenment notion of the equality of all people.

A solution does exist:

First, the races/ethnies evolved separately and have separate values systems; mashing those together destroys them. End diversity, as it cannot work without a cost so high we don’t want to consider it. Without inherent values, we are left with scientific management at the hands of a government strong enough to enforce values a thousand ways per person daily — a totalitarian surveillance state. 1984 doesn’t occur because the people are good, but because they can’t agree what’s good, so a power structure needs to step in, figure out a way of defining good, and then impose it with force. Separate the races.

Second, caste systems always will exist — and are gentler than class systems, as they do not force every single citizen into constant competition for money to buy their way into the higher levels of class. Caste separates us by ability; class separates us by ability and willingness to accumulate material wealth. Restore the aristocracy, and throw some people into the laborer group and disenfranchise them for having a lack of ability to make judgments correctly about factual and long-term concerns. We are genetically different in ability, moral character and intelligence, and caste preserves this, while ending the incessant class warfare that marks W.E.I.R.D. nations to this day.

These are difficult truths and I expect them to be ignored until it is too late, at which point they will become common knowledge, and we will embark on the exponentially more difficult process of reconstructing when we could have simply changed direction. C’est la vie.

Why I’m not freaking out about the latest drama | When is a white person not white?