As Predicted, We Are in Bush v. Gore Territory 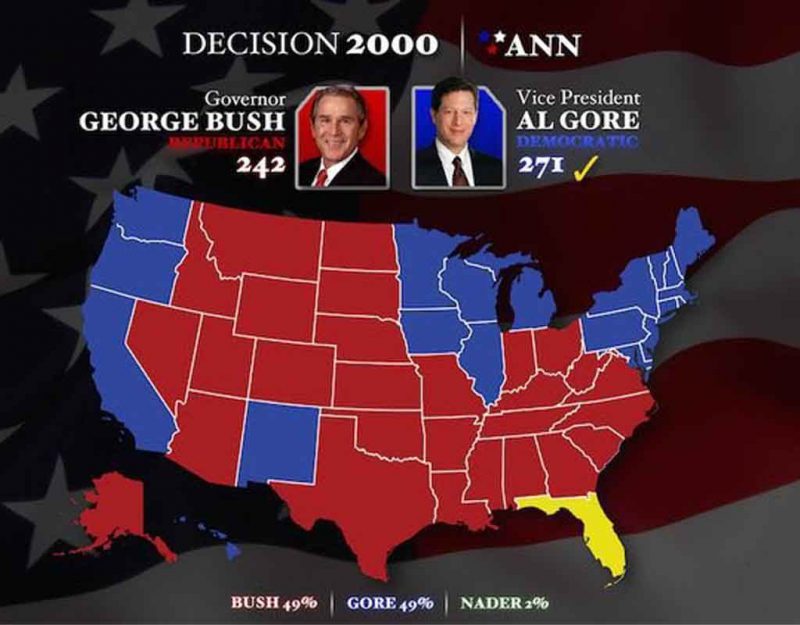 As pointed out in an earlier post, this election is headed toward Bush v. Gore territory, with SCOTUS ruling on the Constitutionality of a vote which was deliberately engineered to favor one party.

On the way to that path, Team Trump has to establish a number of limitations on the equal voting rights of Americans and on the legitimacy of the voting process, and they are starting with the simple stuff, then will work upward to systematic interference, political machines, and foreign powers.

In the meantime, every day that goes by without Trump certified as the winner is a loss of America. Legislation cannot proceed; no one wants to deal with a potential lame duck or potential jailbait president like Biden would be. No one can trust the Biden presidency.

It has also become clear that China sees itself as the victor in this election, and with clasped hands is planning for a new century in which America takes a subordinate role to the new Genghis Khan and his globalist horde.

That in turn makes people nervous. We know what Chinese rule will be like because we have seventy-one years of history with the People’s Republic of China, and five thousand more years of reasonably reliable Chinese history. China makes centralized control systems and leaves behind ruins.

Then we look at what the corporate environment would look like under Biden. The Big Tech companies would win big, and small business would die under another year of COVID-19 lockdown, at which point everyone would have to obey: get a job with one of the big six companies, say the correct Leftist dogma, volunteer to help minorities on the weekend, marry someone non-White, and embrace diversity, homosexuality, transgenderism, feminism, and other neurotic insanity or be deplatformed and live in the woods with the toxic waste, mutant raccoons, and homeless people.

Democrats have invented corporate Communism, or a hybrid of the worst aspects of socialism, Mongolism, fascism, libertarianism, Office Space, Idiocracy, Brave New World, and neoconservatism. Our civilization gives up and decomposes into third-world idiocy at that point.

Jenna Ellis gets into the Trump path:

Essentially, Trump has to establish a cause for action, which requires that various state parties do things that influence this election illegitimately, at which point he can sue them and bring up a Constitutional argument — both 14th amendment and procedural — and SCOTUS can rule for him.

This allows Trump to introduce into evidence the various aspects of the case that he will use in future civil and criminal trials against those responsible, if he so chooses. Trump has known that elections have been stolen since 2008, and he used this election as bait to catch the Deep State, organized crime families, political machines, and ultimately our real enemy, China. He lured them out with a prize they could not refuse, lay in wait with data-gathering and linking technologies like the Kraken, caught people on film, and now will be — like the previous anti-mafia investigations chaired by Rudy Giuliani — turning these lower-level people to testify against their masters. All of this will come out in official evidence, laying the groundwork for lawsuits against the fraudsters and criminal charges for those who committed treason. This will be a ways off however.

In the meantime, the constant flood of revelations and the incessant suppression by media and social media further convinces the world that this election was illegitimate. The same people who were celebrating a Biden win two weeks ago now see America as teetering on the brink by considering it.

America needs leadership. We need another COVID-19 relief bill to keep the economy from imploding, since the Democrat-imposed lockdowns have starved everyone. We need relief from evictions and consequently, relief for landlords. We need to roll out this vaccine for those who want it and get our economy restarted, since without production, everyone starves.

At this point, the Democrats are actively sabotaging America and the world by bowing to China. Trump will most likely win his SCOTUS case not because the court are conservatives, but because they will defer to Bush v. Gore. Then the revelations about who engineered this theft will come out.

That will bring Trump to one of his greatest moments: America will have to have the conversation about Leftism that we have been avoiding for a long time. It is clear that normal people and Leftists cannot coexist. Trump offers a reasonable compromise with his moderate policy based in American roots.

As has been said here many times, Trump is step one of a many step process. His goal is to stop the Leftist takeover. With the failure of this election theft, the Left will go into decline, at which point the Right needs to move hard to stop diversity, ban socialist-style entitlements, end civil rights, and return to the natural rights Anglo-American culture upon which this country was founded.

Trump will take the first steps, and the rest is up to us, but in our favor, we have finally seen the grim truth of the Leftist problem. We cannot coexist even with moderate Leftism because when it wins, it goes hard Left as the country did under FDR, JFK, LBJ, and Clinton. That cannot happen again.

The naysayers are out there spewing all sorts of nasty vitriol about America, Trump, and conservatives. It is time to use one of the most powerful words in English: “no.” We can say no to this takeover, no to the ideology of parasitism the Left offers, and no to the idea of being a world shopping mall.

By doing that, we say “yes” to the restoration of Western Civilization, toward prioritizing our people over the rest of this dying species, and toward achieving great things which will vault us to the next stage. The future is happening now.