Two Things That Confirm That This Election Was Stolen

In animal fights, each participant tends to puff up or fluff his fur or feathers in order to look larger. If you can spoof and bully your opponent into backing down, you win by default, and appear that much more powerful because you have demonstrated that others are afraid of you.

Then again, you have to ask… if they were fighting in the first place, how secure actually was their power? Those with absolute power never engage in conflict; they merely exercise that power, and everyone else clears out of the way.

That tells us that this election was challenged by a massive bluff created by coordinated action by the “goodthinkers,” or those who are defending the regime. Like Red Guards and Jacobins, these are people who feel a sense of meaning through the power sensations they experience by allying with the system.

When every major media site, every major social media site (including knitting), and every public figure is in agreement on something, you are not seeing consensus; you are seeing obedience. They are pitching to you that civilization is not in decline, the system is not making things worse, and all you need to do is go back to sleep, keep working and paying taxes, and ignoring the obvious problems.

That way, the flow of money continues, to them. You are the sucker that they need to convince to be conned and keep funding them. This is how cons work: you want the mark — that is the sucker you are going to rob — to sign up for the con himself, so that way, you escape without blame.

This tells you that when you see thought control, you know that you are being conned and that you are the mark. Thought control always involves a false consensus where a relatively few people attempt to represent themselves as being the majority in the country, when in reality they are not.

If this were a legitimate election, you would not see media censorship of Trump’s remarks. You are seeing thought control; Trump is not the one who has gathered together a clique to pretend that what is real is not real. He is the lone voice telling them that their false reality is both in fact false and dangerous, like most unrealistic things, since the house — the universe, the patterns of nature, the gods, or God — wins in the end.

That is the first thing that should tell you what is going on here. The second is the bounce in the yuan once the fix was in. Your enemies — and China has spied on us, fought two wars against us, and funded the Clintons — do not experience a currency bounce when you elect a good leader, but they sure do when you elect a bad one. This tells us that money that is not even on the books has been coming from China, since they have a massive financial incentive to prop up their currency, since their economy was failing before COVID and Biden. 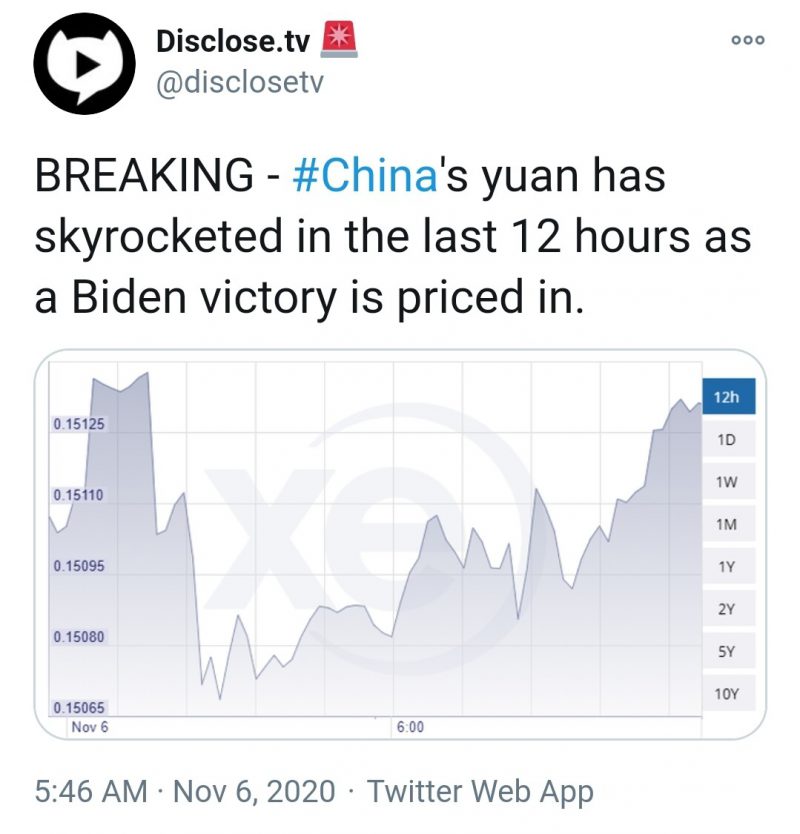 In reality, we are seeing the last gasps of the system that has run liberal democracy on the engine of civil rights since the LBJ days. Remember how LBJ jumped at the chance to enfranchise Blacks?

In March 1965, a voting rights march was brutally broken up by Alabama state troopers. The incident, captured by television reporters, prompted President Lyndon Johnson to call for legislation on voting rights. He detailed the many ways that were used to deny voting rights to blacks and, in 1965, the Voting Rights Bill was approved. This act banned devious tactics used to limit voting rights.

Tyrants and criminals — if you have not read Robert Caro’s The Path to Power about LBJ’s corrupt rise, now is a good time; I grew up reading it — love dumb audiences, but they love outsider audiences even more. People who do not feel at home in a place believe that they will feel safer if the order of the place (the majority culture, heritage, faith, and behaviors) is destroyed. They will therefore vote for the tyrant to wreck it with bureaucracy, sexual liberation, socialism, and militarization; we know this is the case because the same thing happened in revolutionary France and Russia.

The Left cruised easy on this type of thing for the postwar years after almost losing everything in the 1920s when their income taxes crashed the economy. The years leading up to WW1 showed us the true consequences of the decisions made after the Civil War, in that corruption and organized crime basically took over huge parts of American life.

Now, this has finally run down. Years of stealing from Americans in order to finance their own empires might come to an end. The cozy relationship betweeen government agencies, industry, and media might fail. This would make American democracy functional and lead to losses for those who feel like outsiders here.

Biden is leaving; the time is coming for Leftism to end. The frauds are being exposed, including centuries of deception and corruption. Democracy is collapsing and with it, the empty modern life of bureaucracy, consumerism, and alienation. The reign of the peasants and middle classes is over.

At just the right time, humanity is maturing. We are leaving behind the illusions of the past few centuries and moving toward a dual recognition of the primary importance of reality, and the necessity of working toward a beautiful, excellent, wise, and reverent life.

Of course they are stealing elections, deplatforming, censoring, banning, stealing, looting, and killing. Their time is ending and they are fighting to hang onto it to the last minute because they are not the smarter people who set up this system, got rich, and got out. They are the imitators.

This tells us that the Leftist scam actually died before this current group of people took over. It has been sick for some time, and by refusing to accept change and let something else take over, it has damaged the nations still foolish enough to hang onto it.

Across the West, the sycophants — Angela Merkel, David Cameron, Nicolas Sarkozy, Barack Obama — have been steadily getting blown out by people with the Trump/Farage view, which is that Western Civilization has been in decay for some time and has hit rock bottom, and only an end to diversity and socialism can get us out.

This process continues and with the most recent election, the Left has just admitted how much they are running scared. To cheat this blatantly (and destroy American democracy in the process) shows that they are at risk, in fear, and they know it. History has turned against them. It is not widely visible, yet. But it is coming, and they are going. No one will miss them.

Great Reset | This Is Not Normal Life Anymore