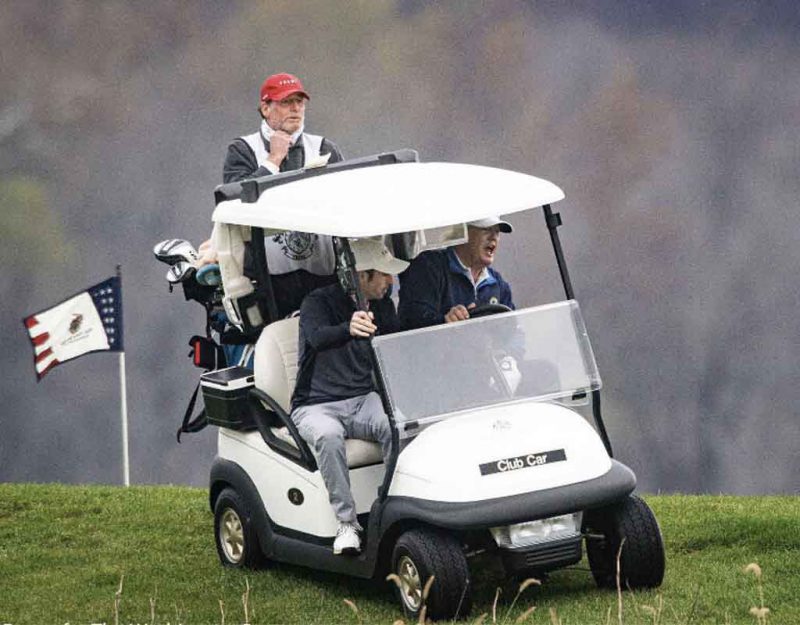 History moves in curves rather than corners. We rarely find wholly unexpected events, only ignored trends that later exploded. We also see how people follow political and social trends from fear of being left out, yet fear that which no one else has recently done.

As election 2020 comes into focus, it becomes clear that what happened during the Obama years did not end during the first Trump Administration; he was both too busy doing other things, and unwilling to do what he knew would unite people against him, namely crack down on the guilty.

Instead, he gave them a chance to mend their ways, and now will proceed to reveal them. Revelation in this case means showing their actual character versus the carefully-manicured facade they present to the rest of us. When you show people as they are, their essence becomes clear.

For those of us like me, Generation Xers who watched Western Civilization destroying itself and realized that we had no future in any of our lands, revelation produces a valuable outcome: it removes hidden threats. The revealed show exactly what they do, and therefore, what they will do in the future.

This in turn forces the audience to make an informed choice. Option A will produce more of Outcome X; Option B produces more of Outcome Y. The question then becomes one of outcomes, X or Y, which takes us into the realist domain of measuring our actions by effect in reality.

Statements by Team Trump tell us that they uncovered several layers of election fraud. First, there were destroyed ballots replaced by fake mail-in votes and ballots filled out at polling places. We sure became a third-world society fast after the Hart-Celler Act.

Next, however, comes the question of voting machines, and it seems likely that Team Trump has matched patterns of output to an algorithm in the Dominion code, and therefore can show that someone deliberately engineered an election theft using these machines.

Finally, the most interesting question arises: communications. In my view, the questions of overseas servers are moot; what they have found, most likely, is communication intercepts between a foreign power, the Democrat leadership, and the people at the polls.

Most likely, we will discover that the Obama-Clinton political machine engineered this steal, and did so with the help of a foreign power, most likely China. A three-letter agency, staffed by Obama-Clinton loyalists appointed during the Obama term, is mostly likely involved.

This will reveal that Leftists conspired with foreign Leftists to take over this country for the benefit of an international power. The deal was struck this way: we give you control of the country, but we get to keep our money-making enterprise and local power.

We know this because this deal always appears during foreign takeovers. The occupying force finds local scam artists who will gladly serve that foreign power, so long as they can keep power in the ways that are important to them, namely massive scams to become fabulously wealthy.

Our government revolves around a core of Leftists who make a couple hundred thousand a year but are worth tens of millions of dollars. Similarly, many mid-level bureaucrats with six-figure salaries seem to live in multimillion-dollar homes and have extensive investment portfolios.

To an economist, corruption appears like any other rent-seeking behavior. Politicians and bureaucrats want guarantees of power so that they can trade on those. They offer to do things for industry, and in exchange, get jobs for their families members, speaking fees, consulting gigs, and so on.

Some of them, like Hillary Clinton, engineered a brazen scam. The politician runs a non-profit, donations come in to that, and the politician can pay himself or herself a few million a year from that while deducting all expenses including travel, security, insurance, and housing.

The Clinton Foundation has run this way for decades, seeming to achieve little despite hundreds of millions in wealth, and it now turns out that Joe Biden has his own anti-cancer charity that does little more than pay salaries to employees who will turn out to be others from the new elite.

People like this have no consciousness of the effects of their actions. They hate society, which they see as bad and stupid, and want to rip it off. If they have to sell it to China to make their four hundred million and depart to Switzerland, that is just the price of the deal.

Trump will do more good than he could by prosecuting these people. He will present the evidence, get it in the record, and promptly forbid government from dealing with known criminals of this nature. Their fortunes will diminish and they will become nobodies, more failed grifters in a dying society.

This has a side benefit in that it forces us to look at the arc of history. We will see that our pro-democracy zeal in the world wars led conveniently to the replacement of the Anglo-Saxon hierarchy, placing in their stead a group of “new Americans” who have done nothing but lie, cheat, and steal.

Even more, we will have to question Leftism itself. It promises altruism, but all of our problems are worse. Its solutions do not work, and bring with them new problems. A century later, we are ready to try something else.

Plans of Resistance | What The Deal With China Looks Like