Why The Dot-Com Collapse Will Doom The World Economy 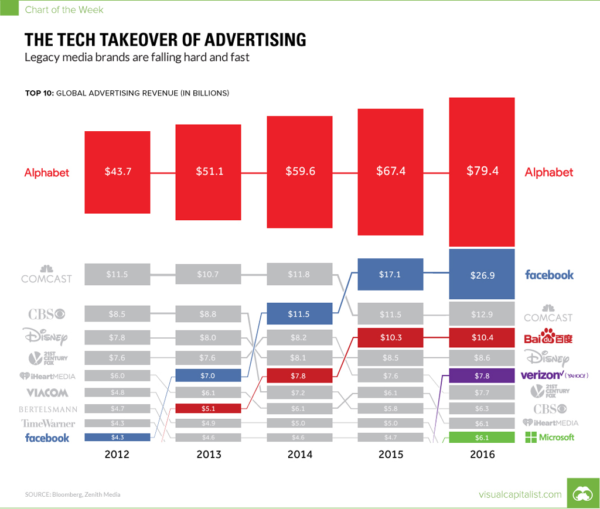 For those who are not familiar with our consumer society, it works like this: governments and large companies dump money on the working and middle classes so that they spent it buying essentially disposable goods, which makes the money used in those economies experience higher demand, which allows governments to keep borrowing.

Advertising drives this entire process by taking money from companies and using it to fund media, which in turn provides products that keep the workers occupied (“entertained”) and so neutralized from any other lifestyle, while compelled to buy more stuff and thus, drive the gears of the economy. It is Keynesian “pump-priming” in perpetual motion, at least until the debt bomb explodes.

Over the past ten years, the new Dot-Com 3.0 monopolists have taken over advertising, as this image from Visual Capitalist shows us. The internet has displaced television, but if the internet revenues are built on false promises, then the whole thing will crash.

If advertising goes, media goes; if media goes, our consumer economy will be irreparably damaged. This will further invalidate the age of ideology which promised a comfortable and stable life for the average person, and will have instead delivered them into an economy in permanent recession, since money that should have been spent on infrastructure and future planning was not.

The Dot-Com 3.0 bubble will burst as the truth of a 2009 report is revealed to be consistent, namely that 8% of the user contribute 85% of the ad clicks, meaning that all of internet advertising is based on false promises. At that point, the gig is up and confidence in online advertising will crash.

Since that time, internet advertisers have attempted to transition to video, but are finding that these ads are less effective in a world of multiple windows where a user can simply click away from, close or mute video content. In particular, Facebook and Twitter have been caught inflating statistics, and Google remains vague on how many of its ads are viewed by bots and not real humans, or if those real humans actually intend to buy anything. In any case, the data suggest that most people are not paying attention to these ads.

This explains why dot-com companies are behaving like abusive monopolies, swallowing up any companies which compete with them or driving them out of the market, in order to keep the emptiness of their franchise from being revealed:

In an explosive new allegation, a renowned architect has accused Google of racketeering, saying in a lawsuit the company has a pattern of stealing trade secrets from people it first invites to collaborate. Architect Eli Attia spent 50 years developing what his lawsuit calls “game-changing new technology” for building construction. Google in 2010 struck a deal to work with him on commercializing it as software, and Attia moved with his family from New York to Palo Alto to focus on the initiative, code-named “Project Genie.” The project was undertaken in Google’s secretive “Google X” unit for experimental “moonshots.”

But then Google and its co-founders Larry Page and Sergey Brin “plotted to squeeze Attia out of the project” and pretended to kill it but used Attia’s technology to “surreptitiously” spin off Project Genie into a new company, according to the lawsuit… This week, a judge in Santa Clara County Superior Court approved the addition of racketeering claims to the lawsuit originally filed in 2014. Attia’s legal team uncovered six other incidents in which Google had engaged in a “substantially similar fact pattern of misappropriation of trade secrets” from other people or companies, according to a July 25 legal filing from Attia.

Much as Amazon consumes smaller companies in order to expand to all reaches of the market, and how other social media firms aggressively filter out links from competitors or promote their own paid advertising above that of others, the Dot-Com 3.0 surge itself represents a monopoly: crowding out old industry, such as brick and mortar stores, while concentrating power in itself, all without a business model that is transparent and therefore, likely represents illusory value which causes a consumer investment binge like the one that preceded the Great Depression:

The stock market, centered at the New York Stock Exchange on Wall Street in New York City, was the scene of reckless speculation, where everyone from millionaire tycoons to cooks and janitors poured their savings into stocks. As a result, the stock market underwent rapid expansion, reaching its peak in August 1929.

By then, production had already declined and unemployment had risen, leaving stock prices much higher than their actual value. Additionally, wages at that time were low, consumer debt was proliferating, the agricultural sector of the economy was struggling due to drought and falling food prices, and banks had an excess of large loans that could not be liquidated.

As reported here before in the past in depth, based on years of observing the internet economy, we face the same conditions now: arrogant pseudo-elites wielding excessive power, over-investment by clueless consumers trusting media hype, fake value, a mutually self-validating industry, un-hyped currency devaluation, signs of a fragile bubble, catastrophic government intervention, maturing technologies worth less over time, and a lack of awareness by those who should know that the market is unstable.

Consumer society has gone this way before, producing bubbles where early investors make out like bandits, and then transfer the money to actually functional industries, leaving the clueless herd to rush in and buy a lot of virtual properties that turn out to be worthless, in time. But this time, we are playing not just with our own economy, but with the new interlinked global economy.

We might view this as a tragedy of the commons. To investors, wealth is a zero-sum game, with more of it made at the drop of a hat. But when this value is not backed by something of actual utility, a bubble is created, and then we all wait to see what random event will trigger it and bottom out the economy.

If We Are Going to Disavow Groups on the Alt Right, We Should Start With The Insane | Harvey Weinstein: Sacrifice