Did Irish Immigration Shift America To The Left? 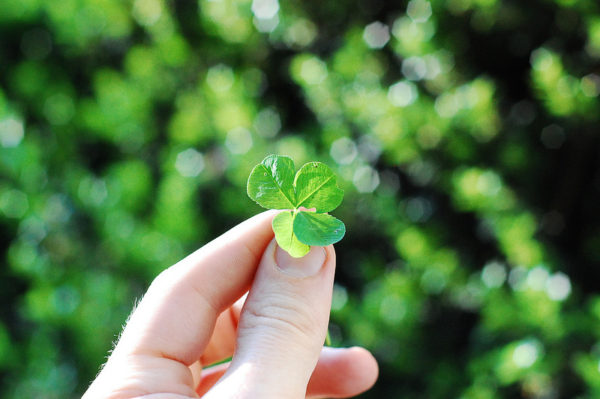 A consistent theme on Amerika has been the notion that diversity itself, and not the groups contained within, creates a loss of social order because standards in common are adulterated and social paranoia results. The resulting pervasive social distrust causes people to become atomized, alienated and to “hunker down” in their homes and adopt an apathetic attitude toward politics and society, which they view as lost causes.

If diversity is the problem, then diversity even among the same race is also a problem. American history shows us this is the case through the example of Irish immigration. We can observe this by watching through history for the process of Irish-American numbers rising as the integrity of the country fell:

Another group who joined the great story of the United States were the Irish and the great famine of the 1840s sparked mass migration from Ireland.

It is estimated that between 1820 and 1920, 4.5 million Irish moved to the United States and settled in the large cities like New York, Boston, Philadelphia, Chicago and San Francisco. 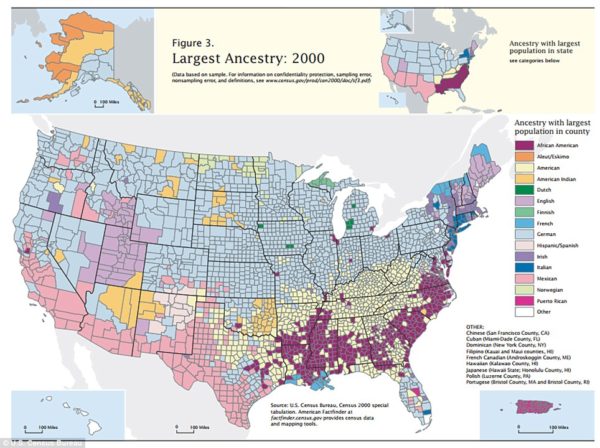 Irish immigration accelerated as the country liberalized in the years leading up to the Civil War:

These Irish people were instrumental in sponsoring the Civil War, mainly because they disliked hierarchical Anglo-Saxon societies like the South and identified with “oppressed minorities,” with whom they shared a bond in slavery dating back to pre-colonial times, and also were distinctive because of Semitic and Asiatic trace admixture in the Irish bloodline. From The Daily Mail again:

Since laws already on the books prohibited people of any Asian origin from becoming citizens, they were barred entry. The law was revised in 1952, but kept the quota system based on country of origin in the U.S. population and only allowed low quotas to Asian nations.

The American children of Italian and other European immigrants saw that law “as a slur against their own status” and fought for the system to be changed, said Mae Ngai, professor of history and Asian American studies at Columbia University. In fighting for change, they looked to the civil rights movement.

…Speaking to the American Committee on Italian Migration in June 1963, President John F. Kennedy cited the “nearly intolerable” plight of those who had family members in other countries who wanted to come to the U.S. and could be useful citizens, but were being blocked by “the inequity and maldistribution of the quota numbers.”

In fact, the Irish had a long history of agitation against the Western European ruling classes who had made the country that Irish immigrants, whose fortunes at home had been grim long before the English intervened, now enjoyed:

Irish and Africans Americans had lots in common and lots of contact during this period; they lived side by side and shared work spaces. In the early years of immigration the poor Irish and blacks were thrown together, very much part of the same class competing for the same jobs. In the census of 1850, the term mulatto appears for the first time due primarily to inter-marriage between Irish and African Americans. The Irish were often referred to as “Negroes turned inside out and Negroes as smoked Irish.” A famous quip of the time attributed to a black man went something like this: “My master is a great tyrant, he treats me like a common Irishman.” Free blacks and Irish were viewed by the Nativists as related, somehow similar, performing the same tasks in society. It was felt that if amalgamation between the races was to happen, it would happen between Irish and blacks. But, ultimately, the Irish made the decision to embrace whiteness, thus becoming part of the system which dominated and oppressed blacks. Although it contradicted their experience back home, it meant freedom here since blackness meant slavery.

An article by a black writer in an 1860 edition of the Liberator explained how the Irish ultimately attained their objectives: “Fifteen or twenty years ago, a Catholic priest in Philadelphia said to the Irish people in that city, ‘You are all poor, and chiefly laborers, the blacks are poor laborers; many of the native whites are laborers; now, if you wish to succeed, you must do everything that they do, no matter how degrading, and do it for less than they can afford to do it for.’ The Irish adopted this plan; they lived on less than the Americans could live upon, and worked for less, and the result is, that nearly all the menial employments are monopolized by the Irish, who now get as good prices as anybody. There were other avenues open to American white men, and though they have suffered much, the chief support of the Irish has come from the places from which we have been crowded.”

This caused them to identify with the Other, even fighting against the Southern United States twelve years before the Civil War:

A little-known chapter in U.S.-Mexican history is that of El BatallÃ³n de los San Patricios or â€œSt. Patrickâ€™s Battalion.â€ In a nutshell, St. Patrickâ€™s Battalion was a group of immigrants, mostly of Irish descent, who fought alongside the Mexican Army during the Mexican-American War (1846-1848). To provide further context: this took place during the height of Manifest Destiny.

The Civil War itself may have only been possible because of the shift in political attitudes brought by the Irish to the North, where they were a larger percentage of the population than in the South, which was more Anglo-Saxon and thus despised by the Irish. The political agenda of the North shifted as the Irish gained political power:

By this time, attitudes towards the Irish had begun to change. The Civil War was probably the turning point; so many thousands of Irish whole-heartedly participated in the war (they made up the majority of no less than 40 Union regiments), and gained a certain respect and acceptance from Americans as a result. And second or third generation Irish-Americans had moved up the social and managerial ladder from their early labouring work. Some were even entering the professions.

Of course, this was not the lot of the majority. In the 1900 census there were still hundreds of thousands of Irish immigrants living in poverty, mostly in urban slums. But economic circumstances were improving for a significant proportion, and the Irish, as a group, were gaining footholds in the workplace, especially in the labour or trade union movement, the police and the fire service.

Their numbers helped. The large Irish populations of cities such as Boston, Chicago and New York were able to get their candidates elected to power, so launching the Irish American political class.

This political landslide created a new form of politics based in opposition to the Western European majority. These new political entities emphasized strong government which handed out entitlements to its constituents, effectively buying votes, as had been the norm in places like Ireland and Italy.

In addition to the Civil War, Irish-American political leanings dominated the East Coast, which became a powerhouse for Leftist politics: 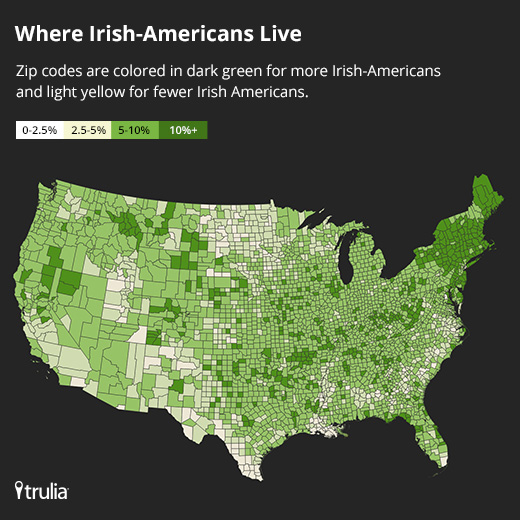 Trulia’s chief economist Jed Kulko put all this data on a map, which shows the heaviest concentration of Irish-American zip codes. He notes that “Irish-Americans are at least 5 percent of the population in most counties across the U.S., and 10 percent or more in most of New England, New York state, New Jersey, eastern Pennsylvania, and other smaller counties across the country.”

The Irish influence — along with fellow trace admixed groups such as Italians, Slavs and Jews — was so great that it created a backlash against the new Southern/Eastern/Irish European immigrants:

In 1845, a potato famine in Ireland, caused by a fungus that destroyed the country’s most important food source, killed a million people and left millions more hungry. Within a decade, nearly 2 million Irish had emigrated to the U.S.

Italians followed, beginning in the 1860s, in response to economic and political turmoil at home. Many were long-term migrants. Like many Mexicans today, they went home when they had made enough money and came back to the U.S. when they needed to make more.

Jews also began to arrive in significant numbers in the 1860s, first from Germany and then later from Eastern Europe, including Russia, fleeing anti-Semitism and deadly pogroms (government-sponsored attacks on Jewish towns). Between 1880 and 1924, a third of Eastern Europe’s Jews left for the U.S., with most settling in overcrowded tenement neighborhoods like New York’s Lower East Side.

As usual, the barn door was slammed only after the horse was long gone:

In the 1920s, Congress imposed quotas that sharply reduced the number of immigrants allowed in, and gave preference to Northern Europeans in an attempt to re-create the ethnic profile of 19th-century America.

Perhaps the greatest victory of the Irish, however, was in the 1960s with the election of John F. Kennedy, the first president of humble Irish origins as opposed to Scots-Irish or English aristocracy living in Ireland, who embarked upon a liberalization program that culminated after his death in the Hart-Celler Act which reversed the previous trend toward favoring Northern/Western European immigration.

This shows us a direct line between Irish immigration and the increasing liberalization of America. This makes sense because diversity causes an expansion in Leftism, mainly because minority groups must either accept that their origins were less fortunate, or blame the new majority and scapegoat them for the problems of the minority group. The latter is infinitely more popular.

Already balkanization is occurring, where individual groups retreat to small enclaves for their own ethnic and religious cohort, and like diversity, it starts within the white race as WASPs secede from the mixed-European herd as well as the mixed-race mass.

The lesson we can learn from all of this is that white diversity is as fatal as inter-racial diversity (sometimes also called multiculturalism, cosmopolitanism, internationalism or the “melting pot,” an extension of the “magic dirt” notion that we can make people into “Americans” through laws, economics and propaganda) and that as diversity fails, so will white nationalism as different European groups go their own way and separate from the others.

Cassandra And Josiah | The Battle Cry Of The Liliana