The Battle Cry Of The Liliana 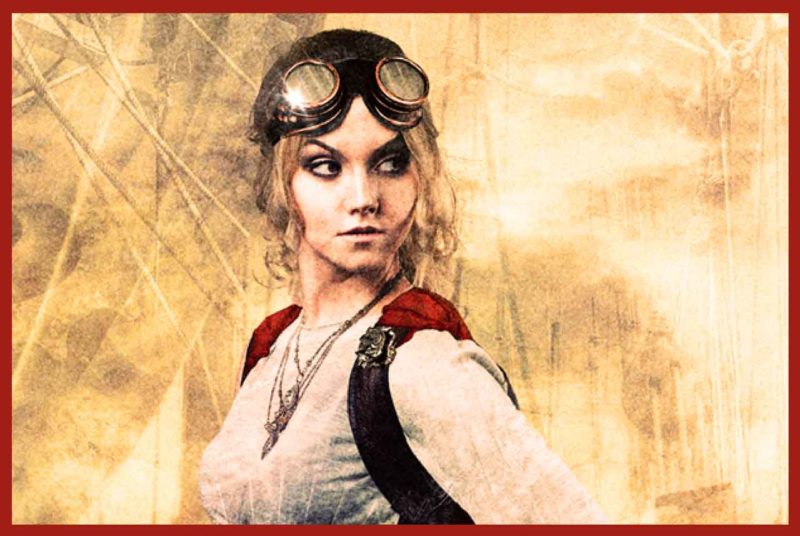 This story is a flash fiction prequel to the new novel For Steam and Country.

Theordore Von Monocle swung his legs over the side of the airshipâ€™s railing, releasing the rope ladder to land on the deck. His cape flowed behind him, and his signature top hat remained on his head despite the wind the giant turbines generated.

The landing party had been a success. A complete rout of the Wyranth supply caravan, which had been exactly where the Grand Rislandian Armyâ€™s intelligence agents said it would be. When intelligence was right, it made his job a lot easier. Even with the victory, there was no joy or adulation coming from him or his commandos. For the fifth strike in a row, theyâ€™d lost one of their own.

Several of the crew watched him from the deck, their faces longing for leadership. Ordinarily, Theo would give a rousing speech, but he couldnâ€™t muster one today.

Instead, he strode across the length of the ship to the door that opened into the Lilianaâ€™s mess cabin. Long benches spanned the room along with several tables for the crew to all be able to eat at once. The chef and his newest helper, a beautiful girl by the name of Talyen, lingered in the back. Theo could smell the spices already, but he wasnâ€™t hungry.

He collapsed onto one of the benches, part from exhaustion and part from the sadness of the loss of his crewman. There would be very little time to mourn poor Everett, a young man who had joined the crew. When he came aboard, the boy had a longing for adventure in his eyes. The last thing Theo saw in those eyes had been the blank stare of death.

Too many deaths. Too many friends lost. This one had been the final straw, the one that broke his own morale. Tears formed in Theoâ€™s eyes, but he held them back, vowing not to let the rest of his crew see that kind of weakness. He was a symbol to his people. One of victory and immortality.

Theo bit down hard on his tongue in an effort to feel something else. That proved to be a mistake, as the salty taste of blood formed in his mouth. There had to be something he could do to lift his own spirits, to get the crew motivated again.

From behind him, footsteps fell on the wood planks. The floorboards creaked, which could be annoying at times, but it also meant that no assassins would ever sneak up on him. Theo turned around.

Harkerpal approached, bobbing his head as he bounced toward Theoâ€™s table. â€œBaron, good to see you made it back. Life is short, and it is a blessing each breath that it continues. Thatâ€™s what my mother always told me. I remember the days home sick for school where she would make me fresh stew. It smelled a lot like what the chefâ€™s preparing tonight, come to think of it,â€ Harkerpal said.

The man was the type that could talk endlessly. However, he was also the finest engineer in Rislandia. No one knew more about the workings of airships. â€œIâ€™m not much in the mood for conversation, Harkerpal,â€ Theo said, trying to sound polite.

â€œWe lost Everett,â€ Theo said. He turned, propping both of his elbows onto the table and resting his chin in his hands.

â€œI remember the time when Everett drank a little too much in celebration after a battle. Heâ€”â€œ

â€œNot now, Harkerpal.â€ The words came from between his teeth, sounding harsher than they should have.

Silence resounded for a long moment. â€œAh,â€ Harkerpal finally said. He lifted one leg over the bench and then the other, plopping down by Theoâ€™s side. â€œThe crew needs you, you know. They look up to you.â€

â€œI know.â€ Theo let his face fall further into his hands. â€œI canâ€™t be their symbol right now though. Itâ€™s one death too many.â€

â€œWe all make sacrifices to be a part of this crew,â€ Harkerpal said. â€œBut itâ€™s worth it. We get to do something no one else in history has done. Well, aside from the other four commissioned airships. But it is still a rare privilege.â€

Theo grunted in response. What could he do? He was a man at the end of the day, with the same thoughts and feelings as everyone else. The problem was, the crew would see his lack of willpower and it would reflect in their performance. They needed something to stir them. But what?

â€œYou know, Iâ€™m quite honored to be serving Rislandia. We have a fair king who is a good man and does right by his subjects,â€ Harkerpal said, as if sensing Theoâ€™s thoughts.

â€œThatâ€™s why weâ€™re here,â€ Theo said, but not as enthusiastic as he should have been. â€œMaybe we need something a little simpler to rally with, though.â€

â€œAh, like a mantra or a creed. I heard that the monks to the east in Atrebla utter the same seven words every morning in a chant. Itâ€™s supposed to be beautiful when theyâ€™re all in chorus.â€

â€œIâ€™m not having the crew chant,â€ Theo said. He sat himself back upright and turned to look at Harkerpal.

The engineer stroked his chin. â€œYouâ€™re right. But we could change it to something else.â€ He snapped his fingers. â€œA battle cry!â€

Theo couldnâ€™t help but let out the smallest of chuckles at that. Enthusiasm was contagious, heâ€™d give Harkerpal that. â€œFor Malaky?â€

Talyen, the chefâ€™s assistant, moved across the mess with a bucket of hot water in her hands. She looked to be struggling from it. Steam rose from the bucket to her face.

â€œOur steam exhaust brings fear to our enemies when they see our glorious ship!â€ Harkerpal said, laughing to himself. â€œDown in the engine room, we like to pretend that itâ€™s our work that they so fear.â€

â€œHeh,â€ Theo said. He found himself rising to help Talyen, his spirits already lifting. â€œMaybe thatâ€™s what matters anyway. The symbol of it all. For steam!â€ he said jokingly, raising a hand in the air.

When Theo had arrived by Talyen, she gratefully handed the bucket over to him. â€œWhat are you two laughing so hard about?â€ she asked, wiping sweat from her brow when Theo relieved her of the heavy object.

Theo followed her, careful not to spill the water. The hot steam filled his face. â€œThinking of a battle cry for the crew. Something simple to lift spirits and remind us why weâ€™re here.â€

â€œYou need something with more substance,â€ Talyen said. She held the kitchenâ€™s swinging door open for Theo. Theo carried the bucket into the kitchen. â€œYou guys were talking about how great Rislandia is.â€ She blushed. â€œSorry, I can overhear everything in the mess from the kitchen.â€

â€œDonâ€™t worry. Itâ€™s an open discussion,â€ Theo said, lifting the bucket higher and placing it on the stove. â€œHere?â€

Talyen nodded. She pursed her lips. â€œHmm. How about â€˜For Steam and Countryâ€™? That has a nice ring to it.â€

It did. The hairs on his neck rose. The words caused Theoâ€™s skin to prickle with electricity. It felt right. â€œTalyen, youâ€™re a genius.â€ He turned to shout back to Harkerpal. â€œYou hear that?â€

â€œFor steam and country!â€ Theo belted as if he meant the words. The cry pierced him even more deeply than before.

Those words carried, and others throughout the ship repeated it. Shouts of the words echoed, muffled through doors and floorboards. They had struck a chord that would change the course of this war, and theyâ€™d done it together. Theodore Von Monocle smiled.

Did Irish Immigration Shift America To The Left? | White Intersectionality