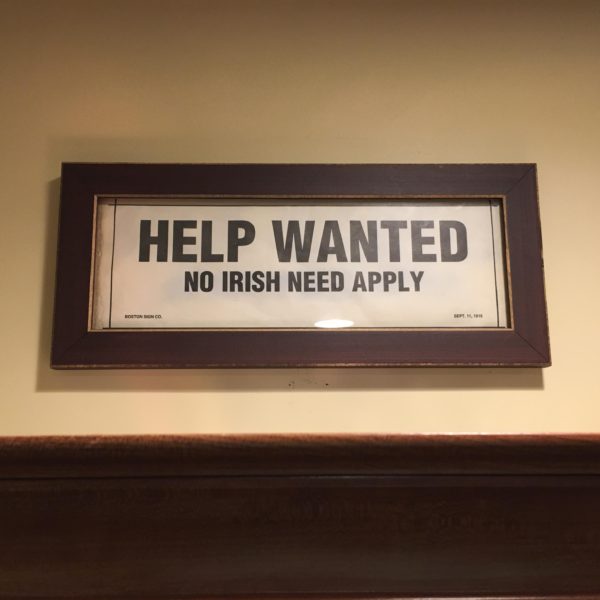 The Irish may be the West’s original experience of diversity and the inevitable ethnic replacement that occurs following it. This is why Anglos distrusted them and viewed them, along with Spanish and Italians, as not white. From recent analysis of Irish heritage:

Migrant communities did not compete with the original Irish. They became the Irish.

The ancestors of the Stone Age farmers began their journey in the Bible lands, where agriculture first began, and arrived in Ireland perhaps via the southern Mediterranean. They brought with them cattle, cereals, ceramics and a tendency to black hair and brown eyes.

These settlers were followed by people, initially from the Pontic steppe of southern Russia, who knew how to mine for copper and work with gold, and who carried the genetic variant for a blood disorder called haemochromatosis, a hereditary genetic condition so common in Ireland that it is sometimes called Celtic disease.

The middle eastern wave, which explains the middle eastern appearance of many Irish, came in through Southern Spain and wandered until it found a place where it could go no further, where it mixed with Neolithic remnants and later, the Eastern European wave.

This influence is separate from and in addition to the Black Irish:

So when or how would Sub-Saharan African (SSA) genes have arrived on our island? What other historical events may have contributed?

Well we all know about the reputation that the people of the west of Ireland have for being darker skinned, the so-called “Black Irishâ”. This may be due to the influence of the Spanish (people from the south of Spain have a higher percentage of SSA markers) who were active traders along the coasts of Ireland. Some five thousand Spanish soldiers made up the Spanish Armada which was wrecked across the Irish Western Seaboard in 1588.

Although the British reported that the majority of these soldiers were rounded up and executed, there is anecdotal evidence to suggest that more of these soldiers survived that was originally thought and these soldiers could have contributed to the introduction of SSA markers into the Irish population.

Irish people who hail from the west of Ireland generally have some percentage of SSA markers in their profile.

The Irish are in other words a very ancient European population which has been mostly replaced by foreign groups, which makes sense because as an Island, Ireland experienced little population change except when major historical events disrupted it, as we can see through a brief ethno-history of Ireland:

After the Ice Age glaciers retreated from Northern Europe more than 9,000 years ago, hunter- gatherers spread north into what is now Great Britain and Ireland, during the Middle Stone Age. Some 3,000 years later, during the New Stone Age, the first farming communities appeared in Ireland. The Bronze Age began 4,500 years ago and brought with it new skills linked to metalworking and pottery. During the late Bronze Age, Iron was discovered in mainland Europe and a new cultural phenomenon began to evolve.

Around 500 B.C., the Bronze Age gave way to an early Iron Age culture that spread across all of Western Europe, including the British Isles. These new people originated in central Europe, near what is Austria today. They were divided into many different tribes, but were collectively known as the Celts.

…The Roman presence largely wiped out most traces of Celtic culture in England — even replacing the language. Since the Romans never occupied Ireland or Scotland in any real sense, they are among the few places where Celtic languages have survived to this day.

From a few years before the most recent analysis, Gene Expression gave us a plot showing the relationship between English, Irish and Nordic-Germanic populations: 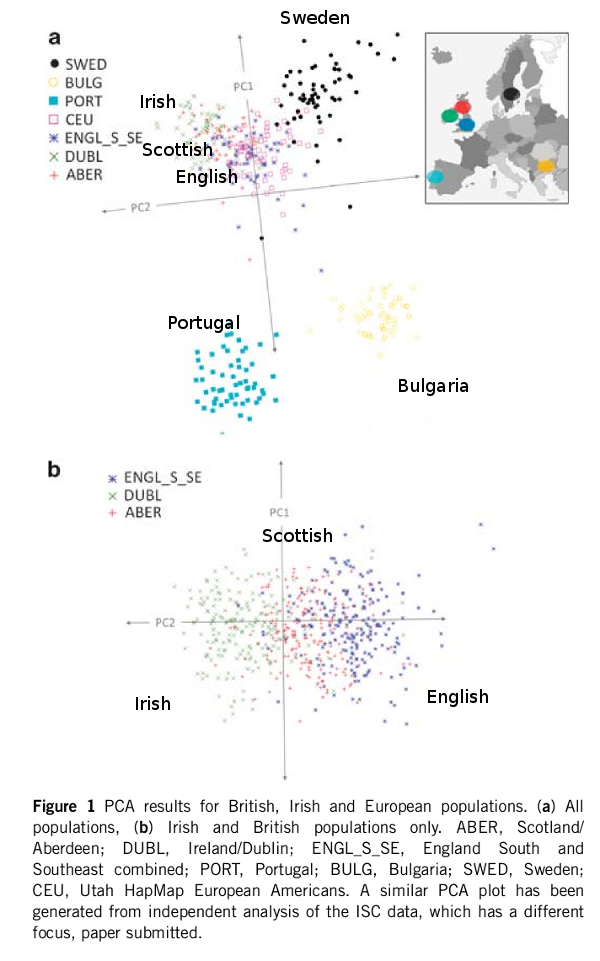 Most likely, what this shows from a small sample size is the infusion of Irish and Scottish blood into England, along with Southern Europeans, rather than to reject the idea that the tall, blonde-haired and blue-eyed English were not of Anglo-Saxon origin. That fits with our new knowledge that the Irish cluster more with Southern Europeans, Mediterraneans and Semites than Northern or Central Europeans:

Yet the bones discovered behind McCuaig’s tell a different story of Irish origins, and it does not include the Celts.

“The DNA evidence based on those bones completely upends the traditional view,” said Barry Cunliffe, an emeritus professor of archaeology at Oxford who has written books on the origins of the people of Ireland.

DNA research indicates that the three skeletons found behind McCuaig’s are the ancestors of the modern Irish and they predate the Celts and their purported arrival by 1,000 years or more. The genetic roots of today’s Irish, in other words, existed in Ireland before the Celts arrived.

“The most striking feature” of the bones, according to the research published in the Proceedings of the National Academy of Science, is how much their DNA resembles that of contemporary Irish, Welsh and Scots.

This shows us a tendency of diversity: it changes what is present, and then elements from closer to the equator gradually absorb anything else that comes their way, leaving behind a population closer to that of the middle east than original European elements. Those middle eastern elements are significant for one major reason: they reveal Asiatic admixture, much like that in Eastern Europe.

We can see the results of this today in DNA tests taken by the Irish:

Within The Jewish People, A Struggle Against Leftism | Concreting