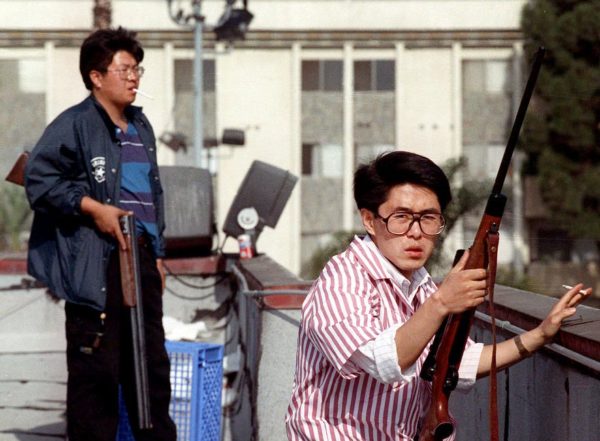 The attitude most Caucasians take toward diversity these days is something like this: “The idea was that they could come here and live the good life, so long as there were not problems. That obviously has not been the case, so we need to think about rolling this back so that it gently fades away, instead of doubling down on it.”

If there is one reason for the failure of the Left, it is that they have made themselves the Civil Rights™ party and their primary goal is to disenfranchise the natural populations of America and Europe by replacing them with third world permaLeftist voters. People wanted that when it seemed like it would end the race guilt and riots, but under Obama, things got worse. So obviously “more” of the same will not help.

There are a number of ways of rolling back diversity, but most people are conservative at a procedural level if nothing else, so prefer for this to be as low-impact as possible. It will almost certainly be a variation on the Pincer Strategy: raise lowers, lower benefits. This encourages and end to newcomers, and suggests to those who are not happy living in Chinatowns that they should go home.

It does this without abusing them or even acting against them; all we need to do is remove the laws, created by Leftists, that give preference and incentives to diversity. There are several roots to this tree — HUD, anti-discrimination law, civil rights law — but the prototype of these policies is the type of quota preference that became affirmative action.

Luckily, the Trump administration is taking aim at affirmative action in academia:

In particular, Kennedyâ€™s affirmative-action opinion embraced the theory that admissions officers at public universities may use diversity as their rationale to give several advantages to applicants of color. The idea goes all the way back to a solo concurring opinion by Justice Lewis Powell in a 1978 case called Regents of the University of California v. Bakke, which embraced Harvard Universityâ€™s description of its admission practices at the time.

…But diversity does permit admissions officers to make â€œholisticâ€ judgments about applicants and curate a class that includes people from many different backgrounds. In practice, at the institutions that use the technique — which is almost all major universities, whether state or private — the racial balance ends up looking remarkably similar from year to year.

…According to an internal Justice Department document leaked to Charlie Savage of the New York Times, the department is looking for internal volunteers to work on an investigation and litigation of â€œintentional race-based discrimination in college and university admissions.â€ The investigation would be run out of the political part of the civil rights division, where Sessionsâ€™s policy team can keep an eye on it.

If affirmative action falls, it means that schools will no longer be able to use racial quotas in choosing who they admit. This will change the face of American universities by dropping the lowest performing minorities. More importantly, however, this will be a stone thrown in a pond with ripples spreading outward that will affect all other parts of American law and politics.

Without affirmative action as a basis in education, its status in the workplace may also be in doubt, in that a legal decision against it will have weight in other areas of law as well. This will in turn affect all of the civil rights law based on affirmative action and disparate intent, or “equality in outcomes” rather than “equality of opportunity,” and possibly reach deeply into all government programs that violate choice of association by forcing people to hire, rent to, sell to, work with, and live near other groups.

Were that to come to pass, a “soft balkanization” would occur, where minorities would withdraw to communities for them and policed by them, known as Chinatowns, and white people would have their own spaces, divided internally in the usual myriad of ways that white people separate themselves. This in turn will give momentum to ethnic self-interest among all groups, and weaken the idea of the proposition nation, or nation-state where political allegiance, not membership in the founding ethnic group, determines citizenship.

Some have pointed out the immediate problem of Trump’s action: American universities, if they make admissions choices purely by test scores and grades, will become mostly Asian. However, without the legal pressure to extend admission to minorities, universities may find themselves choosing to be white. Either way, this outcome is better than the current pro-minority regime.

Long ago an admissions officer admitted in candor that for California schools, the primary problem was Asians: “They all have great test scores and grades, but for them, this is just a step toward a profession. They kill campus life and study all the time. And they are more intent on personal benefit than idealism. You can’t build a nation on that.”

He was in favor of admitting well-rounded students of every type, but was leery of Asian study-buddies just like he was skeptical of their overly-nerdly white and Jewish counterparts. Nerds follow instructions, do very well in school, and then become back office fixtures in repetitive tasks. They are not the people who change history, and those are the ones that every school desires.

The point of repealing affirmative action is not to simply remove quotas, but to remove oversight entirely, returning education to the healthier state it was in years ago. Different schools will make different choices, but many will opt for where the arc of history is bending, which is toward innate group identity like tribalism. In America, that means not just white people but WASPs.

Trump is being savvy here. The fall of affirmative action in academia will not only open the door to removing anti-Caucasian laws elsewhere, but will also savage the special snowflakes we see in education today. Having large numbers of minorities created a need for easy degrees for people to get through, like African-American Studies and Gender Studies, and those in turn brought the real lunatics onboard as faculty.

Without the need for those programs, these schools will have upward pressure from a more white and less politicized entering student body, and so those faculty are going to find themselves going elsewhere. “Tenured” does not mean you cannot be downsized when your department attracts four students. The indirect purge of Leftists from academia has begun.

As for those of us on the Alt Right, it makes sense to keep the pressure high. Affirmative action must fall, and so should all other Civil Rights laws, which were written predicated on the assumption that the wealth of white America was an infinite blank check for government to use as it wishes. The “populism” on the Right is rejection of government and return to culture, heritage, and people instead.