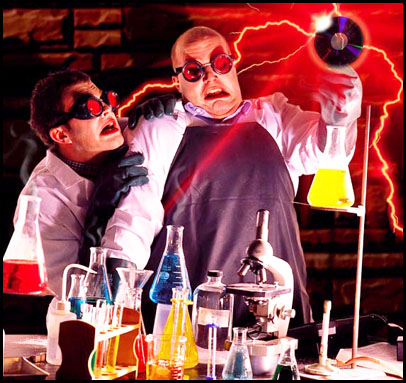 We are told that scientists are our new overlords because they are “objective,” which means a combination of lacking self-interest, not having one team over the other to root for, and being free from the normal superstitions and neuroses that make people unreliable narrators. And yet, none of this is true.

The first thing to know about scientists is that they are employees, but for them, the profit motive is direct. In academia and independent research, those who make the headlines are those who get promoted and eventually get to positions of high salary and high stability.

That in turn means that scientists are dependent on audience. Like politicians, they have constituents, but in this case, the constituents are those who buy the media products that enable those headlines to occur. If there is public interest in some topic, they want scientific heroes, and there is big money in being the next Craig Venter or P.J. Meyers.

What that tells us is that scientists are far from unbiased or lacking in self-interest. On top of that, we are now seeing that their ideological biases — part of finding constituents — are also just as “subjective” as those of anyone else, as a recent study finds that scientists who support theories of nurture over nature tend to disbelieve the scientific method itself:

For instance, on the topic of gender identity, an evolutionary social sciences scholar said: â€œI believe gender identity reflects a mixture of genetic and culture inputs, with the genetic being somewhat more importantâ€, while a literary studies scholar said: â€œI agree that biological characteristics play a role in gender-identity formation but I suppose I absolutely disagree that they do so â€˜predominantly’â€.

Perhaps most worrying, in the sense of undermining hopes of any future consensus on understanding human behaviour and culture, is that the scholars who favoured environmental and cultural explanations for behaviour also tended to doubt the scientific method:

â€œHuman behaviour is not subject to immutable laws, and, therefore, canâ€™t be studied scientifically,â€ said a religious studies scholar. â€œScientific knowledge has something to tell us about material artefacts and their production, but â€˜human natureâ€™, â€˜human experienceâ€™ and â€˜human behaviourâ€™ are not empirically stable,â€ said a literary studies scholar.

The scientific method, a general procedure for verifying the empirical basis for any observation, is the core of science itself. To disbelieve it is like being a Pope who is an atheist, although at this point, we probably have one of those too.

Those who favor “nurture” are the ones who believe that education, training, self-help books, government films and social pressures are more important than genetic ability. That is: they are “magic dirt” believers who think you can take anyone, regardless of genetics, and make him into an ideal citizen.

Naturally, this is a denial of Darwinism, since the theory of natural selection finds that general inclinations toward behaviors are genetically-coded, as are abilities. Nurture plays some role, mostly in that it is possible to damage potential in a child, for example, but nature determines the raw material with which nurture works.

Specifically, intelligence is heritable, and since we now know that many genes contribute to intelligence, it is not possible for a random mutation to make someone a genius. They might have a few of these genes tweaked, but will not get the whole intelligence package, which is why hereditary caste systems are more functional than “meritocracies.”

In the meantime, we can stop worshiping scientists and science because they are clearly just as fallible as any other human effort.