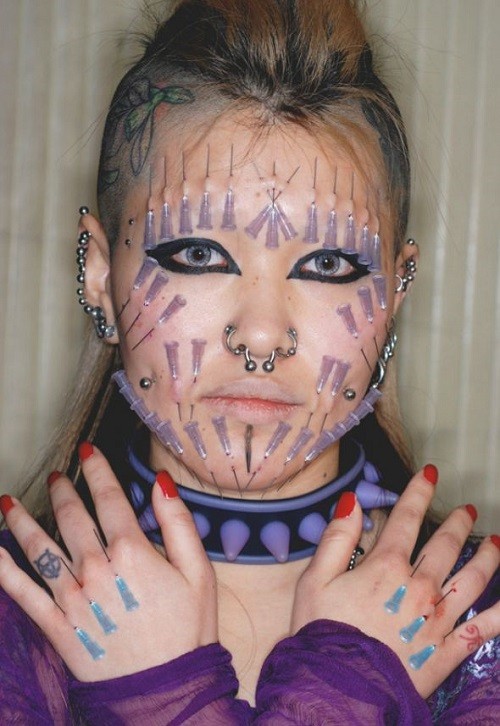 The Left is based in a single idea, egalitarianism, or defense of the individual against social standards. Equality is compulsory social inclusion, which means that people are not held accountable to values and principles according to which they are ranked in social status; instead, everyone is included, and they are ranked by wealth, power, novelty, and social popularity.

As part of its jihad crusade for equality, the Left hates any form of strong authority that can impose standards on people. Individualists hate being forced to conform, even when it is for obvious reasons, because they hope to express their individuality through external methods instead of developing internal ones, because developing internal ones requires yoking the personality to reality. You do not grow, develop, refine, mature, and become wiser by sealing the inner self away from the world, but it is what individualists desire, and the Left is the party of individualism.

For years the Left has been chafing at the success of broken windows policing in New York, and now they are trotting out what they view as a smoking gun against the “broken windows” theory:

“Crime was starting to go down in New York prior to the Giuliani election and prior to the implementation of broken windows policing,” says Harcourt, the Columbia law professor. “And of course what we witnessed from that period, basically from about 1991, was that the crime in the country starts going down, and it’s a remarkable drop in violent crime in this country. Now, what’s so remarkable about it is how widespread it was.”

Harcourt points out that crime dropped not only in New York, but in many other cities where nothing like broken windows policing was in place. In fact, crime even fell in parts of the country where police departments were mired in corruption scandals and largely viewed as dysfunctional, such as Los Angeles.

He seems to have forgotten about the violent riots the following year. But even more, he has made the fundamental error of assuming that a lessening in crime across the nation would lessen it as much as broken windows policing did, and forgets to mention that in some areas, crime did not immediately go down. We should also consider that crime as a whole has increased in New York:

In truth, this is actually a mixed bag. If you look at the 2015 numbers, homicides, rape and robbery did spike (via WSJ):

[W]hile crime in the city continued its historic downward trend, led largely by a drop in burglaries and stolen vehicles, three of the most serious crimes rose in 2015: homicides were up 5.1%, rapes 6.3% and robberies 2.1%. Also, crime increased in two of the city’s five boroughs: Manhattan and the Bronx.

Politico had a post about the 2015 and 2016 homicide numbers so far, showing just 252 murders through September 25, a 5.3 percent decline from the same time last year. Yet, in August, it appeared to be a 23 jump in violent crime within the city’s parks over a nine-month period (via NBC NY):

The comparison, which covered more than 1,100 city parks, showed cases of rape increased 40 percent, felony assaults jumped 34 percent and robberies spiked 15 percent. Murders were up 200 percent, from two to six. In total, 417 people reported being the victims of violent crimes compared to 340 in the prior nine months.

In other words, when broken windows policing went away, crime began its upward climb, as it has done so nationwide. This coincides with a drop in “broken windows” policing under Obama, in addition to other policies.

So, maybe Trump should’ve cited the NYPD data, or maybe he should stay focused on his national narrative, which is that violent crime, including homicides, has risen, which was confirmed by the FBI last night (via WaPo):

Homicides in the United States went up by more than 10 percent in 2015 over the year before, while violent crime increased by nearly 4 percent in the same period, according to new statistics released Monday by the FBI.

All told, the country reported its highest estimated violent crime rate in three years, and while these numbers are far below those seen one or two decades earlier, they mark a sharp increase following two years of declines, the FBI’s summary of crime figures showed.

That’s a huge rise in violent crime. Since Barack Obama took office seven years before, it makes sense to view this as the start of the effects of his policies and the national shift from hard-on-crime rhetoric to a softer, more rehabilitation-oriented attitude.

In addition, this shows us another important detail. Let us borrow a concept from economists here: when one thing gets too difficult, people move on to alternatives that are less expensive and less risky instead. When policing goes up, criminals go elsewhere, or turn to other types of crimes.

However, under the “broken windows” policy, all types of crimes drop. Somehow the good professor does not mention that.

The nationwide drop in crime during the 1990s — except for those huge race riots — may spur us to draw other comparisons though. What events went on that could explain this drop? For starters, the United States doubled down on Affirmative Action with the Civil Rights Act of 1991, possibly designed as a way to enfranchise black voters and make them vote democratic. That worked, certainly.

This paper uses California’s Proposition 209, which prohibited the consideration of race or gender in state-funded contracts, to investigate the effect of disadvantaged business enterprise subcontractor participation goals on the winning bids for highway construction contracts.

After Proposition 209, the prices on state funded contracts fell by 5.6 percent relative to federally funded projects, for which preferences still applied. While the subcontractor requirements are found to distort the contractor’s make-versus-buy decision, most of the decline in costs after Proposition 209 results from the productivity of subcontractors employed.

This seems to arise not from productivity differences between minority and non-minority firms in the same location, but from the higher costs of firms located in high-minority areas.

Higher costs of firms located in high minority areas? It stands to reason that if someone gets a contract for some factor other than competition on price/performance, they have a type of mini-monopoly and through that, no reason to lower their costs. When you have only one grocery store for a hundred miles, they can charge whatever they want for breakfast cereal.

We also should ask what we get for those higher costs, and it turns out that affirmative action did not achieve its stated goals:

And affirmative action “worked.” The most immediate and measurable impact was in government hiring. Blacks had always enjoyed relatively better employment prospects in the public sector, and affirmative action greatly enhanced that. By the early 1970s, 57 percent of black male college graduates and 72 percent of black female college graduates were employed in government positions. The private sector also went on a hiring binge. Impelled by the fear of more urban riots, the Fortune 500 launched a flotilla of affirmative action programs aimed at getting as many black hires in the door as quickly as possible. After decades of economic stagnation, between 1969 and 1972, total black income rose from $38.7 billion to $51.1 billion, a 32 percent jump in just three years.

In other words, it was a bribe, and it continued the government policy of hiring black people in order to pacify them and reduce the number of riots. If we use the standards that the Leftists in the NPR article use, we might as well claim that crime dropped because of the renewal of Affirmative Action after it was pared down during the Reagan 80s, resulting in greater function for American business and government.

The basic problem with Affirmative Action is that it creates a mini-monopoly in which workers are hired for their race, sex or orientation instead of abilities alone. This is a problem because the law does not distinguish between competent and incompetent members of protected groups, causing permanent hires of incompetents who can never be fired.

They can never be fired because if they sue, they may win, and they will win big. Affirmative Action creates a monopoly that in turn creates a mechanism for extortion. This creates a norming of incompetence, at which point organizations become unstable but cannot remove the privileged monopoly of the protected groups. That in turn acts out the usual Leftist pattern of wealth transfer, bleeding the taxpayers for money that goes to both government bureaucrats and a vast permanent underclass.

When viewed as a strategy, affirmative action is designed to displace whites by taking money away from them and making them wait at the back of the line for jobs, housing and transactions. This in turn has caused the prerequisite conditions for civil war because affirmative action is a cornerstone of ethnic replacement of the founding majority, which will give Leftists a new beige group who will tend more toward the Left than those tedious old white people did.

In the meantime, costs go up for every citizen. Not just for the taxes required for Affirmative Action programs, but the salaries in private industry since now every company must hire token protected groups on every level. Not just in the wave of incompetence, but in the high number of lawsuits that occur and the lawyers who are hired as a preventative measure. Not just in the mountain of paperwork and regulations, but in the distrust of fellow employees because they may well be Affirmative Action babies rather than real people. Like unions, Affirmative Action raises costs and paranoia across the board by forcing protection of a group that otherwise is not working out.

Let us then consider the obvious and terrifying: if crime went down after Affirmative Action, that means that those formerly engaged in illegal activity found another and easier source of income. All of those diversity administrators, sensitivity consultants, tolerance trainers, and columnists writing about diversity cost something, but even more, every company is now hiring such people in addition to its other token hires, and passing the cost on to you. Many of them work in government as well. Affirmative Action effectively shifts millions of criminals into positions of authority, especially in government.

The rise in corruption and incompetence in the American government is no longer surprising. This is not to say that there are not qualified candidates from protected groups, only that Affirmative Action does not make such fine distinctions, and so the bad get hired along with the good. And since bad outnumbers good throughout all of humanity, that means that we are enriching people by giving them Affirmative Action jobs. Look at the figures on diversity lawsuits:

*From 1990 through 2006, about 9 out of 10 civil rights filings involved disputes between private parties. Jury trials became more common than bench trials during the 17-year period covered in this report (figure 1).

*The percent of plaintiffs who won at trial between 1990 and 2006 remained steady at about a third.

Affirmative Action is in short a complete disaster, introduced by Republicans to minimize racial tensions, but then used by Democrats as a weapon against the white majority in concert with the plan to import many third world people, all of whom qualify for Affirmative Action and thus displace whites from homes, jobs and businesses.

But the main problem with Affirmative Action is that it is itself a broken window. Signaling that we accept defective and unrealistic policies tells all of the scam artists out there that they have found a willing sucker, and that the West is in the process of waging war on its founding groups. This means the West is weak and ready for takeover. It is no surprise that the subtler kinds of criminal behavior have risen thanks to this advertisement of dysfunction and acceptance of parasitism.