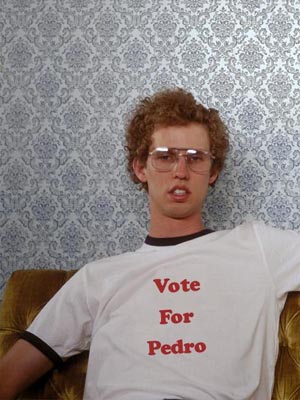 From observing the blog-o-sphere over many years, since that fateful day when Jorn Barger coined the term “blog,” I finally understand blogs:

They are descendants of the teen films of the 1980s.

In these films — Real Genius, Breakfast Club, Ferris Bueller’s Day off, 16 Candles and so on — there’s a clear division between the popular kids and the geeks, and people within these two parallel groups struggle for power both within and between those groups.

The popular kids get shiny red convertibles when they turn 16, are blonde and have money, get good grades and generally are pompous jerks. The geeks — nerds, grinds, stoners, grebos, misfits, drop-outs, homosexuals, skaters, rockers and freaks — are more accepting and generally more interesting.

Each group has its hierarchy. For popular kids, it’s about success. For geeks, it’s not about having good grades, money and the right possessions, but about being a nice person. The geek with the wildest big ambitions gets to lead the group and have a personal army which rivals 4chan.

Blogs are the same way. You have a grievance with life, so you unite all the other people who didn’t make it in the mainstream, and together you form a personal army to destroy the source of your grievance.

Here’s how to be popular:

(There are mainstream blogs. They get popular through an even more direct route, which is talking about new products. They avoid conflict and make you think about pleasant, positive possibilities this way. Recipes, lifestyle, sex, drugs, rock-n-roll, even politics… all products. But at least they’re consistent and inoffensive.)

Your worst enemy may be within. Among your audience you will find many other bloggers. The purpose of blogging is not to get anything done, but to be a big cheese. Everyone wants to be important through their blog. If you live in a dingy apartment piled with bills and cat feces, having 4,000 people visit your blog makes you feel like Jesus, Stalin or Bono.

Having all of these bloggers means there is never a focal point from which achievement could occur, but that’s convenient too. The goal is not out there, but inside: they want excuses for their own lack of achievement, and reasons to feel good about themselves anyway. Blogs are not salvation through knowledge; they are like greeting cards, movies or fruit baskets, little treats that lift you up and make you feel better about the bad things in life you cannot change.

In fact, the blog audience are the anti-action. They want justifications for where they are, not reasons to reach up and improve their situation. And if they’re visiting edgy blogs during the day, they’re more likely not at a job, or at a job where anyone cares what they do.

For this reason, they’re not a great audience if you want to get something done. What they are however is a ready audience, and there for the taking. All you have to do is tap into their bitterness.

Hollywood in Blackface, by Paul Kersey | The court of public opinion