Hollywood in Blackface, by Paul Kersey

Hollywood in Blackface
Black Images in Film from Night of the Living Dead to Thor
by Paul Kersey
With Frank Ochoa
308 pages, CreateSpace, $15 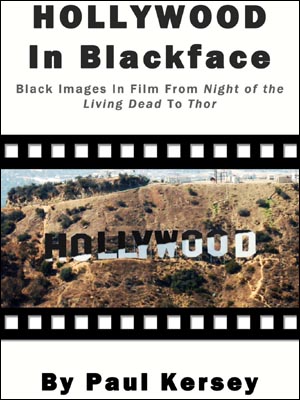 Paul Kersey writes for the incendiary blog Stuff Black People Don’t Like (SBPDL), which seems intended as a parallel to Stuff White People Like (SWPL): both blogs mock the inability of white Americans to discuss race.

Of all the issues brought to our attention in America, not even death, defecation and sex education get more of a whisper treatment than race. In polite society, white people talk about it in a code so intricate and tedious that few can memorize its rules, much less interpret its sotto voce references. Our politicians and social leaders give good lip service to race, but in the same way: by creating public platitudes that are unrelated to reality, while hiding underlying consequences because they are impolitic, impolite and bad marketing.

No one, after all, wants to purchase or vote for anything but a 100% solid solution that is also positive and nice to everyone. Our media robber barons in Hollywood and Madison Avenue know this, so they market us an image of the platitudes and carefully hide the consequences from those who have not seen them in real life. It is this dichotomy that Hollywood in Blackface mocks and uses to tantalize, provoking the reader with a glimpse of a hidden world beyond the (hopelessly deceptive) shiny happy people vision from the media.

Such controversy is not new to Hollywood — they used to do it in the opposite direction:

While Stepin Fetchit was undoubtedly one of the most talented physical comedians ever to do his shtick on the Big Screen, achieving the rare status of being a character actor-supporting player who actually achieved superstar status in the 1930s (becoming a millionaire to boot), his characterization as a lazy, slow-witted, jive-talkin’ “coon” offended African Americans at the time he was a major attraction in motion pictures (primarily the 1930s) and still offends African Americans in the 21st Century, some half-century after he had faded from the screen. Yet, some African Americans claim him as the first black superstar, and thus, a trailblazer for others of his “race.” The controversy over Stepin Fetchit remains very alive to this day, with two biographies published about him in 2005. – IMDB, “Stepin Fetchit”

The first time I saw Stepin Fetchit in a film, I almost fell out of my seat. It was some black and white movie in which he had a minor role, but performed the characteristic black stereotype straight out of a Klan recruiting film. It was in fact such appallingly obvious status quo propaganda that it took some of the momentum out of the film, like any really stupid moment in a film. It was a jump-the-shark moment.

However, in the 1960s, destroying the status quo became the new cool, and Hollywood jumped to step and fetch it. This introduced the platitudes/consequences split that Kersey so expertly satires, in which:

True, there were plenty of exceptions to the rule — Dirty Harry’s legendary rash of beating up minorities in order to get to a white serial killer, or the blaxploitation films of the 1970s, or even the forced diversity in Star Wars — Lando Calrissian — turning out to be more of a traitor, pimp and two-faced double-dealer than positive role model. But for the most part, Hollywood has shown us the shiny happy people version of race relations: African-American presidents, hackers, doctors, lawyers, judges and superheroes.

Kersey mocks this trend with a method dear to my heart, because it combines both the left and right brains. From the geeky scientist side of the brain, he takes a love for facts and figures and citations; from his liberal arts major side, a love of the juxtaposition with ironic commentary. The blog posts (from SBPDL) that he reprints to make this book consistently show us a concrete example from a Hollywood film, then hit us with the statistical reality, then point out the logical inconsistency and show us how we are being manipulated.

The result is devastating.

You, the reader, do not need to agree with Kersey that something called “Black Run America” (which, oddly, means American leadership prioritizing African-American benefits above all else) is producing these stereotypes for a political purpose. You don’t have to like the facts and figures, or believe that they are the result of anything other than racism; Kersey himself is agnostic on this issue. You will however be forced to admit that this Hollywood stereotype is completely dysfunctional and deceptive, laughing all the way.

It’s important to note that neither Kersey nor the author of this review would ever advance the idea that African-American stereotypes are the only issue Hollywood is deceptive about; in fact, from my perspective it seems like Hollywood is confused with every stereotype. In Hollywood, “normal people” live in million-dollar homes and have obvious problems; nerds look like Val Kilmer; high schools are still ruled by blonde jocks in varsity sweaters. Everything Hollywood shows us is a picture show of pleasantly simplified existence.

However, Kersey makes a point when he shows that these Hollywood stereotypes can lead to real-world consequences; as another source said,

Along the way an archetype has emerged, that of the black male hero, who, like Will Smith in â€œIndependence Day,â€ rises from the ashes â€” in the case of that movie, the smoldering ashes of the White House â€” to save the day or just the family vacation. The movies of the past half-century hardly prophesy the present moment, but they offer intriguing premonitions, quick-sketch pictures and sometimes richly realized portraits of black men grappling with issues of identity and the possibilities of power. They have helped write the prehistory of the Obama presidency.

Routinely paired opposite callow, less expert actors like Keanu Reeves, Ashley Judd and Ben Affleck, Mr. Freeman in particular can be relied on to provide counsel and ballast to even the most lightweight genre exercises, along with a sense of purpose and moral seriousness. The touch of gravel in his voice is suggestive of long, hard-traveled roads, while the sagging, doggone tired and mournful eyes look as if they have borne witness to real pain. Much like James Earl Jones before him, though with less basso profundo, Mr. Freeman has become the go-to guy for voice-of-God narration, and for playing the Big Man upstairs.

Yoda himself is a science-fiction variation on Jiminy Cricket, the cute little critter who, in the 1940 Disney classic, advises Pinocchio to â€œalways let your conscience be your guide.â€ In Hollywood, black characters have often provided this kind of advisory role, chirping friendly counsel from the sidelines, as Hattie McDaniel does when she maternally scolds (and protects) Vivien Leigh in â€œGone With the Windâ€ or when an avuncular Bill Robinson (a k a Bojangles) teaches Shirley Temple how to dance up a flight of stairs in â€œThe Little Colonel.â€ These mentor-student relationships invoke what the historian Donald Bogle calls the â€œhuckfinn fixation,â€ movies in which a good white man, having gone up against the corrupt (white) mainstream, takes up with a â€œtrusty black who never competes with the white man and who serves as a reliable ego padder.â€ The white hero â€œgrows in statureâ€ from this association because â€œblacks seem to posses the soul the white man searches for.â€

Barack Obama, after all, is only one man (and only half black) and is working from a script that has yet to be written. But the fantasies of black heroism that have pervaded our popular culture give some sense of what the country hopes for in its new leader, whose burden is not the same as the one taken up by the 42 white men who preceded him. – NYT

What may have spurred Kersey to action is the anomalous casting of African-descended Idris Elba as the Norse god Heimdall in the 2011 movie goof Thor. While the movie looks as stupid as 98% of what comes out of Hollywood, hangs out at the theatre like a juvenile delinquent, and then goes straight to DVD, the casting of a black artist as a white cultural figure provoked a turning point — what if, people asked, a white man was cast as a black cultural figure, like MLK or Malcolm X? We’d never hear the end of that.

While it takes an acerbic approach, Hollywood in Blackface speaks up and points out the elephant in the room that we’re all ignoring. For every one Barack Obama or Morgan Freeman, several million black people live in an entirely different world, one in which diversity does not serve them and they end up impoverished, imprisoned and/or disillusioned. At this blog, we’re honest enough to point out that the historical record of diversity shows that this is always the result. Others want to take a more extreme view and blame African-Americans for this condition. Kersey remains agnostic on this, wisely, and contents himself with satirizing the dichotomy.

The result will keep you chuckling throughout the process of reading. Hearty, inner chuckles bubbling upward at the irrefutable proof: Kersey stacks statistics against image, and news reports against dramatic portrayal, to show us that not only has Hollywood attained too-much-acid-in-the-60s levels of delusion about race, but that Hollywood is the opposite of a reality meter — it’s a propaganda anaesthetic, a machine for explaining away our problems instead of facing them. The pioneers of cinema would be appalled, but in the meantime, we can laugh along with Kersey, and take our dollars out of the movie theatres and invest them in reality instead.