by Jonathan Peter Wilkinson on January 7, 2019 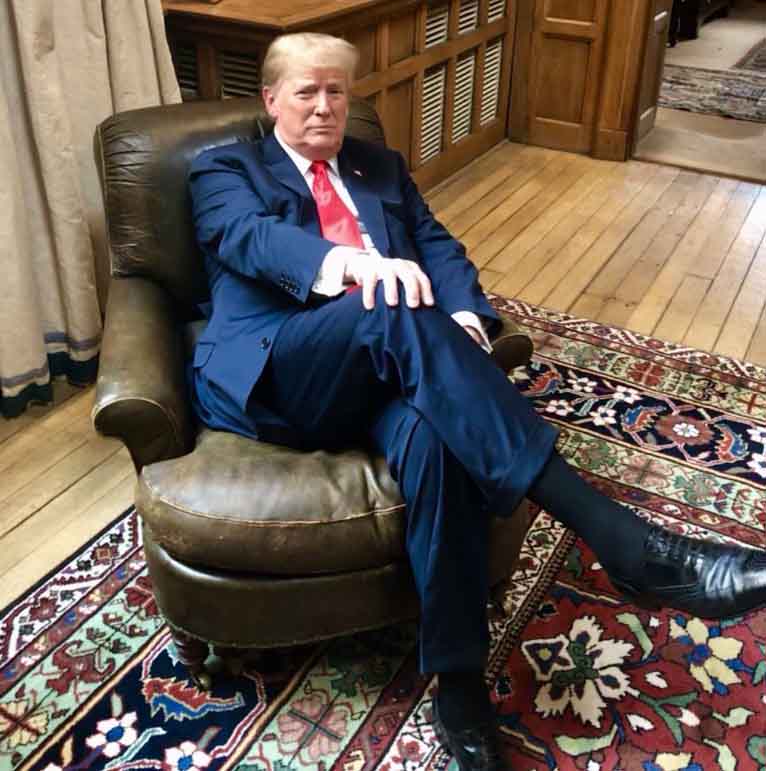 Sending American military personnel over to die in Syria is stupid. Furthermore, it is not in America’s self-interest. Our uniparty permastate just blows through the lives of anyone ingenuous to sign for the military the way a drunk, smelly senior citizen in Vegas pisses away quarters in a rigged slot machine.

So President Trump encounters this situation and attacks it the way you’d expect Captain Obvious to proceed. If our people are dying for no reason, take them out of the dangerous place.

The events of the last 72 hours may be bringing the Trump Doctrine into sharper focus. Is there a “Trump Doctrine”? Trump would say it means “America First,” but his moves to withdraw American forces out of Syria and, it was reported late Thursday night, perhaps a large drawdown of American forces in Afghanistan, suggest he really means it.

Did you sayAfghanistan as well?

There are a lot of rumors that Trump is considering ending America’s war in Afghanistan after 17 years. This is considered extremely irresponsible by the conventional wisdom because if the U.S. doesn’t project power west of the Khyber Pass, what about Afghanistan’s strategic gravel deposits?

And why not ditch these pointless Middle Eastern wars? Even Howard Dean wanted us out of Afghanistan.

“I supported (ramping up troop presence) because I was concerned with what would happen to the women in the country” if the Taliban took control, Dean said. “But I recently read about Karzai saying some very sexist, terrible things, and it’s become obvious that there’s not a whole lot of difference between the two sides.”

He continued: “As much as I feel terrible about what’s happening to the women there, Karzai has shown he can’t be trusted any more than the Taliban to help them.”

“The Vietnam War showed us we shouldn’t prop up corrupt governments, and that’s what we’ve got in Afghanistan.”

There’s a lot of wisdom and understanding on the issue of permawar. It appears at times of great political convenience. Ask Hatred-Powered Howard about withdrawing from Afghanistan now that somebody with an important job title and an opposing partisan affiliation suggests this as a course of action. Your ears don’t deceive you. If there hasn’t been a hard freeze yet where your reading this, you can hear the chirping crickets.

And what of Senator Duckworth of Illinois? Who will ever be allowed to forget how she got her Blackhawk shot out from under her in Mr. Bush’s War? What say you Senator? Let’s save the next graduating class of UH-60 pilots from Ft. Rucker from winding up in a wheelchair similar to yours! Oh, wait. You don’t have Chuckie Schumer’s permission to hold to your stated beliefs anymore. Sorry, Senator. Forgot to check your Kitchen Pass.

Why just pick on Lefty here? There once were influential Real Conservatives who turned hard on Bush II from 2006 to 2008. Imagine someone who wrote the following about the US invasion of Iraq and it’s bungled aftermath:

Almost three years after the invasion, it is still not certain whether, or in what sense, Iraq is a nation. And after two elections and a referendum on its constitution, Iraq barely has a government. A defining attribute of a government is that it has a monopoly on the legitimate exercise of violence. That attribute is incompatible with the existence of private militias of the sort that maraud in Iraq. Michael Rubin of the American Enterprise Institute, writing in the Wall Street Journal, reports that Shiite militias “have broken up coed picnics, executed barbers [for the sin of shaving beards] and liquor store owners, instituted their own courts, and posted religious guards in front of girls’ schools to ensure Iranian-style dress.” Iraq’s other indispensable man, Grand Ayatollah Ali Sistani, says that unless the government can protect religious sites, “the believers will.”

So obviously this guy would love the fact that President Donald J. Trump is Making Amerika Great Again. He would praise our Commander-In-Chief for removing our military from these costly useless conflicts that do nothing to improve anybody’s commonweal other than Lockmart’s. OK, OK, I understand why you just threw the Bright, Red Bullshite Flag at me. I was quoting George Will and I’ve written him off as if he, rather than his unfortunate offspring, were the one afflicted with a tragic case of Down’s Syndrome.

Which brings me to a particular Black Pill that plays rather poorly with my lower digestive tract. There is great unspoken unity in official Washington, DC. A fine and glorious example of bipartisanship. Dwight David Eisenhower warned us about just how forked we’d all be if Democrats and Republicans ever agreed.

This conjunction of an immense military establishment and a large arms industry is new in the American experience. The total influence — economic, political, even spiritual — is felt in every city, every Statehouse, every office of the Federal government. We recognize the imperative need for this development. Yet we must not fail to comprehend its grave implications. Our toil, resources and livelihood are all involved; so is the very structure of our society. In the councils of government, we must guard against the acquisition of unwarranted influence, whether sought or unsought, by the military-industrial complex. The potential for the disastrous rise of misplaced power exists and will persist. We must never let the weight of this combination endanger our liberties or democratic processes. We should take nothing for granted. Only an alert and knowledgeable citizenry can compel the proper meshing of the huge industrial and military machinery of defense with our peaceful methods and goals, so that security and liberty may prosper together.

If you’ve ever attended a weapon system briefing you get The Hostage Slide. It’s the slide that tells you how many states, how many jobs and just exactly which Big-Shwingin’ Dick Senators are benefiting from the program. Kill this wonderful product of Boeing or Textron, and here are all the poor, hard-working Amerikans that go on the EBT Card. You can’t just judge the MI Complex on a basis of actual military necessity. You have to con$ider the indu$trial ba$e. That indu$trial ba$e held hostage is the only thing left that even remotely justifies us endlessly feeding our youth into the hamburger grinders of the Middle East.