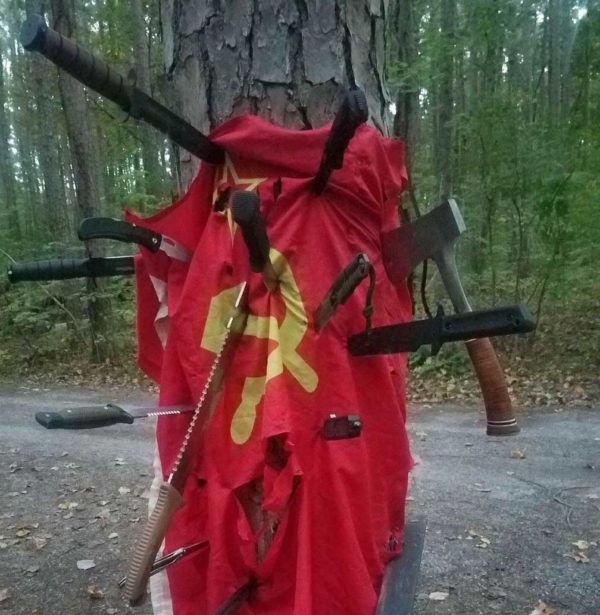 The Age of Ideology slowly ends in the rising dust of its own failures. Our learning has been augmented by the knowledge that no matter what type of “system” we design, they all end in failure because they focus too much on making everyone get along, and not enough on real-world results.

Something called The Human Problem invades every human group. It consists of herd behavior brought on by a desire to get along with others, and that desire replaces goals, at which point the group is shaped by the demands of the individuals in it instead of the shared principles, mission or purpose that originally created it.

We thought we could avoid The Human Problem by avoiding the systems based on social engineering, like Communism and National Socialism. As it turns out, any system based on “equality” — a group-think term used to conceal the individualistic motivation of all involved — ends up in the same place through inversion, or the replacement of meaning with “safe” terms that flatter the group.

Consider the term “equality” itself. When originally designed, it meant that you did not commit an ad hominem and say to something, “You’re from another caste, family, tribe, region or religion, therefore your opinion is automatically wrong.” Instead, you listened to what he had to say, and if it was correct, treated it as closer to the truth.

However, most humans tend to think backward, since they think in terms of effects on themselves, which makes them think the effect was intended, and blinds them to the actual causes. These people therefore are oblivious to the causes of those effects, and so when unequal results occur, they blame the results instead of considering the actual cause, which is that people are unequal.

Over time, the term “equality” inevitably and without exception morphs from treating people fairly to ensuring that everyone has the same level of power, wealth, status and acceptance. To do this, since they cannot raise the lower above their own ability level, they have to tear down the higher and simplify every standard to the mediocre, because that way everyone feels accepted and important.

Through this method, “equality” comes to mean taking from the stronger and giving to the weaker. In the same way, morality has come to mean tolerance of the immoral; fairness has come to mean relativistic judgment; intelligence now means having the “right” opinions memorized. Any attempt to use social engineering to create a more equal, fair or just society seems to result in these inversions.

As such, we recognize now that we are have been living under an undiagnosed regime which we might call neo-Communism. In the years after WW2, it became clear in the West that whatever ideas appealed to the masses would win out over ideas that required sacrifice of personal freedoms in order to have social order, as the Axis powers required of their citizens.

In order to win these conflicts both real and imagined, the West adopted its Leftward tilt from after WW1 and accelerated it. This culminated in the 1960s, after which point Western Civilization — already heavily damaged by the crass commercialism of the 1950s, the French Revolution and the individualistic fallout of The Renaissance™ — really fell apart.

Neo-Communism resembles the old form of Communism, but has two changes: first, it is decentralized, meaning that it is enforced by citizens to show loyalty, instead of by secret police; second, it is grafted onto capitalism, which enables it to avoid the crisis that did in Communism, namely the ability to have any kind of functional economy.

Its decentralized nature means that it works through incentives toward personal reward or social popularity, both of which require the person in question to affirm the ideological narrative in some way. The recent #metoo frenzy of reporting of sexual assaults shows us this market for attention: anyone who can participate in the latest trends, affirming ideology, gets ahead.

In that provides a uniform series of incentives, such that members of all political parties behave roughly the same way, creating a “uniparty” of people who are working to affirm the narrative however they can while staying in the news as much as possible. Since ideology is what holds this society together, the media takes on far greater importance than in any other type of society.

Ideology thus provides both our motivation and a type of currency, in that those who wield ideology well will be rewarded in a society which is mobilized in the military style for perpetual war to enforce that belief system.

Neo-Communism specializes in making us appear “free” while finding ways to entrench us in the system. Simply surviving costs endless money, and jobs are the only way for most people to have that, making people dependent on their paychecks and in turn, on saying the “right” thing so that they do not get fired and end up in the poorhouse.

We can visualize Neo-Communism as a society centered around the idea of equality as enforced by a cultural revolution, as opposed to a political one, and having the following attributes:

The rise of Neo-Communism came from attempts by the need to reconcile their Socialist leanings with the horrors of Communism, causing them to embrace market-driven communism:

But as evidence of communismâ€™s horrors emerged over the decades, it rightly shocked liberals and leftists in the West, who shared many of the egalitarian aims of the revolutionaries.

…But if weâ€™ve learned one lesson from the communist century, it is this: That to implement Marxist ideals is to betray them. Marxâ€™s demand to â€œabolish private propertyâ€ was a clarion call to actionâ€”and an inexorable path to the creation of an oppressive, unchecked state.

A few socialists began to recognize that there could be no freedom without markets and private property. When they made their peace with the existence of capitalism, hoping to regulate rather than to abolish it, they initially elicited denunciations as apostates. Over time, more socialists embraced the welfare state, or the market economy with redistribution.

Since then, we have learned that to adopt egalitarian ideals at all leads to the creation of a crowd, or a herd of people dedicated to the type of behavior we see at carnivals, sporting events and Black Friday sales at Wal-mart. The problem is not Communism; it is egalitarianism.

Neo-Communism was created to conceal that learning. The ideal of the Neo-Communist is to befuddle the population with consumerism while simultaneously indoctrinating them in egalitarian ideological dogma. The thinking is that, like political correctness, this will reprogram them so fundamentally that it fundamentally over-rides “human nature” and makes a working form of socialism.

The problem it faces is that human behavior is not so much “human nature” as it is a reflection of the mathematics of survival. People left unchecked will create a tragedy of the commons by which they exploit whatever they can; individualism is the rule of individuals except for the exceptional. It is why in nature, species tend to consume all resources and then die out. Nature imposes a test to see who can transcend raw individualism.

However, creating a perverse incentive by declaring reward-before-performance, or subsidy for simply being human and “equal” as egalitarian philosophies like classical liberalism and Communism demand, ensures that individualism will be rewarded. That in turn forces others to descend to that level, and herd behavior results, with the herd consuming everything it can and then running over cliffs like lemmings, which is how human societies throughout history have self-destructed.

As a result, Neo-Communism is failing just like Communism, democracy, and European Socialism are: it mutates people into selfish, morally nullified, anti-conscientious beings who are oblivious to everything around them because all of it is based on a lie. Democracy killed ancient Greece and Rome, and now it is killing the West because (apparently) people were so oblivious they were willing to try it again. Socialism, or “economic equality,” is a parallel to democracy, or “political equality,” and both lead to Communism and through it, Neo-Communism as the virus evolves.

If we look at the human condition, we see that in individuals, individualism — a denial of the reality of the inevitable consequences of our actions in preference for individual desires — causes lives to become self-destructive, and that in groups, individualism becomes herd behavior.

The herd ruins everything. Any time we have structure, purpose and principle, we succeed; when we descend into herd behavior, we fail. 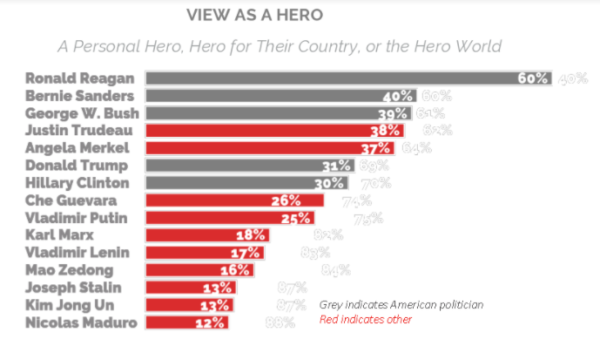 We can see the effects of Neo-Communism on our current civilization through attitudes toward Communism:

According to the latest survey from the Victims of Communism Memorial Foundation, a D.C.-based nonprofit, one in two U.S. millennials say they would rather live in a socialist or communist country than a capitalist democracy.

Whatâ€™s more, 22% of them have a favorable view of Karl Marx and a surprising number see Joseph Stalin and Kim Jong Un as â€œheroes.â€

Leaving aside the impossibility of ignoring, as a young person, the prospect of trolling a survey by praising Kim Jong Un, this attitude shift shows the effects on the generation that directly received the wisdom of the 1960s because those who matured in the 1960s came into power in the 1990s and re-made the educational system to be Marxism lite. Communism is legitimate again, to them.

The survey, which was conducted by research and data firm YouGov, found that millennials are the least knowledgable generation on the subject, with 71% failing to identify the proper definition of communism.

Smith explained that this â€œtroubling turnâ€ highlights pervasive historical illiteracy across the country and â€œthe systemic failure of our education system to teach students about the genocide, destruction, and misery caused by communism since the Bolshevik Revolution one hundred years ago.â€

Perhaps we will find it less surprising that people think in this way when we look at the shift of our economy from capitalism to capitalism with lots of socialism, such that government has become an industry in itself and a part of the economy upon which most people, as under Communism, depend, to varying degrees:

The fastest growing component of household income since 1959 has been â€˜transfer paymentsâ€™ from government. By the turn of the 21st century, 20 per cent of all household income came from this source â€“ from what is otherwise known as welfare or â€˜entitlementsâ€™. Without this income supplement, half of the adults with full-time jobs would live below the poverty line, and most working Americans would be eligible for food stamps.

One influence on the drive toward full Communism is the shift of American society toward those who are from cultures that are more individualistic and thus more prone to collective subsidy, such as the Irish, Eastern Europeans, Southern Europeans, and the vast number of third-world peoples imported since 1965.

Future historians will probably record that the closer a society gets to third world status, the more accepting it is of regimes like Communism because its people will understand nothing more complex than having someone take care of them. The quality of intelligence in a society determines what systems its population can understand, and simpler populations understand only strongmen.

As the West becomes more ethnically mixed and through that, racially mixed, its possibility of avoiding Communism approaches zero. Neo-Communism offers the West a way to fail gracefully by accepting a crypto-Communism rather than the branded, out-of-the-closet full form, and this enables the elites to continue sipping cocktails guilt-free as they watch their world fall around them.