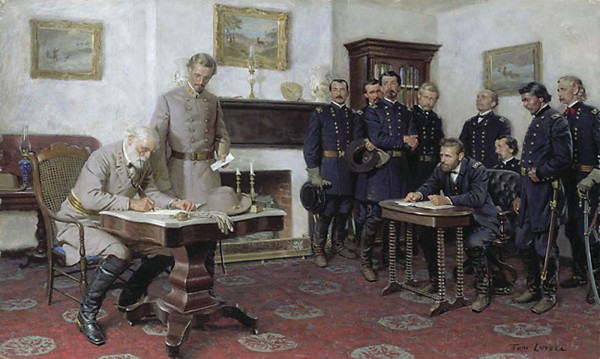 As we approach the sesquicentennial anniversary of the end of the American Civil War, the same divisions that caused that war remain.

These divisions take the form of intractable issues that spring up like dandelions, frustrating our comfortable narrative which indicates that society at large is heading in a good direction. Instead, like 3:00 AM visions of mortality, our Civil War doubts renew themselves with unsettling consistency and yet random timing.

It is not surprising this is so, because the Civil War was the first modern war in many senses. Unlike previous wars, it involved massive scale; industrial might and demographics, not talent, determined the victor. It was also the first of the truly “democratic” wars in that it was won by mobilizing a population toward total war through the use of propaganda that claimed the other side transgressed against the founding idea and most sacred belief of a society.

Through these claims, history was re-written. America changed from a practical escape from ideology into an ideological separation for moral reasons. Crowds are not mobilized by complex reasons or arguments to history involving many factors. The inner herd animal in the human being likes a good story: we came here to live a certain way, the bad guys hate us because they are bad, so we must destroy the utterly so that we reflexively define ourselves as good.

The heavy mental programming created by such story-telling changes a nation. It achieves its goal, which is to make people act paradoxically and step into line to go sacrifice themselves for ideals that do not benefit them. But when facing such binary definitions as good and evil, people cannot resist, because to refuse to defend one is seen as endorsing the other. This created a mythos that won the war, but changed the nation so much afterward that its present course was guaranteed. We have been ideological lunatics questing for pure moral goodness ever since.

Our history of the war denies its complex roots in favor of propaganda. In the textbooks and TV commercials, the South simply hated black people. They enslaved them because they liked to beat them and call them nasty names. In reality, the South was an attempt to break away from the society which had emerged in the North with the admission of non-Western Europeans, which was a proposition nation united equally by zombie ideology and commerce. In the South, social hierarchy and honor came before shekels and groupthink; the North was the opposite.

Slavery was only one in a series of touchstone issues that made the South pull away. But it was the one the North chose to make its justification for war, and via survivorship bias, we assume it was the only legitimate one. Much of the beef involved shady issues like States’ rights and interstate commerce, mainly because at two thousand miles away from New York city one can live in almost any style one prefers. The North and South only clashed over political questions, where the more populous North dominating by motivating its citizens with good-us-versus-bad-them ideology and won every time, and in trade, where the agricultural South was no match for the industrial North.

To pretend this issue was new is a fallacy (and to pretend that slavery was the cause or purpose of the war is a fraud). Slavery was a trouble during the time of the Constitution, with the agricultural states depending on it mainly because it represented much of their wealth, comparable to infrastructure and equipment in business today. The North, being essentially non-agricultural, had no need for it, and could make slavery into a touchstone issue which it did over the next century. With the removal of slavery, the South would lose most of its wealth and be permanently in hock to the North, ensuring total control over the whole nation-state by the Northeastern industrial powers. The industrialists wanted to eliminate the high costs of textiles and make further profit through the resale of those textiles, which is only possible when raw materials are cheap. As a result, the South resisted, in part knowing that slavery was about to be replaced by industry in any case much as forms of manual labor had been obsoleted in England starting two centuries prior.

Like most wars, then, the Civil War boils down to profit and control. The North wanted to control the entire nation and adapt it to its urban standard, where the South wanted to avoid that fate for itself. This war, like many others, was a coalition between populist moral notions and industry, against the areas which had not already succumbed:

While the subordination and the political and social inequality of the African race was fully conceded by all, it was plainly apparent that slavery would soon disappear from what are now the non-slave-holding States of the original thirteen. The opposition to slavery was then, as now, general in those States and the Constitution was made with direct reference to that fact. But a distinct abolition party was not formed in the United States for more than half a century after the Government went into operation. The main reason was that the North, even if united, could not control both branches of the Legislature during any portion of that time. Therefore such an organization must have resulted either in utter failure or in the total overthrow of the Government. The material prosperity of the North was greatly dependent on the Federal Government; that of the South not at all. In the first years of the Republic the navigating, commercial, and manufacturing interests of the North began to seek profit and aggrandizement at the expense of the agricultural interests. – Declaration of Causes, State of Georgia

In this, the Civil War resembled the Napoleonic Wars, where liberal ideologues raged across Europe conquering any nation which did not adhere to liberal ideology.

The Civil War also presaged the coming ideology of Communism, where an international coalition of Communist nations made it their policy to subvert, defeat and occupy any nation that was not already Communist.

It also foreshadowed the World Wars, where the more-ideologically-leftist nations joined together to defeat the outliers.

If you are imagining a mob rushing at any who is different with the intent of subjugating them, you’re getting the picture.

But as we reach 150 years since the Civil War, we have to ask ourselves: what did we fight for, and what was actually won?

Slavery is more prevalent now than it was then and, as instability spreads through the world, only increasing. While African-Americans are technically “free,” most of them live under worse conditions than under slavery and are about to be replaced by Hispanic indios and Asian immigrants that are more convenient for industry.

The United States is still divided into North and South, with the North controlling government, economy and police, but the South having popular sentiment behind it. Most American presidents win because they become popular in the South and use that constituency as a launch platform.

We see the same pattern again and again. The War on Drugs, the crusade against Saddam Hussein, and the social justice jihad against all discrimination. These represent the force of social disorder which is convenient for both industry and the individual, in that it operates to remove social rules and hierarchy. This creates only a market, which is convenient for business, and lifts any expectations from the individual, enabling them to be more self-focused and less obligated to pay attention to reality.

Perhaps we will someday wake up and realize that democracy creates a vast horde of armchair moralists who are easily manipulated like “useful idiots” into calling for war, and that industry goes along with this because its goal is the same. We might even see that government by consensus creates the lowest common denominator, and that we have unleashed a cancer which will find some “moral” reason to make war on anyone who is different until it has total control of humanity and earth.

Since The EnlightenmentTM, where the preferences of the individual were made our guiding concept in replacement of natural law and social hierarchy, the West has been steadily deconstructing itself. When it reaches the lowest common denominator, all that remains is the angry mob and opportunistic industry. The Civil War showed us our future in microcosm, and since that time, no joy has truly existed in the West. Yes, we take pride in what we own and have our personal pursuits, but in each heart lurks the awareness that decay is upon us and, while industry and the mob rule, it has the upper hand.

Potemkin morality in Brezhnevland | “Racism” does not exist