Amerika Makes It Into The Daily Dot 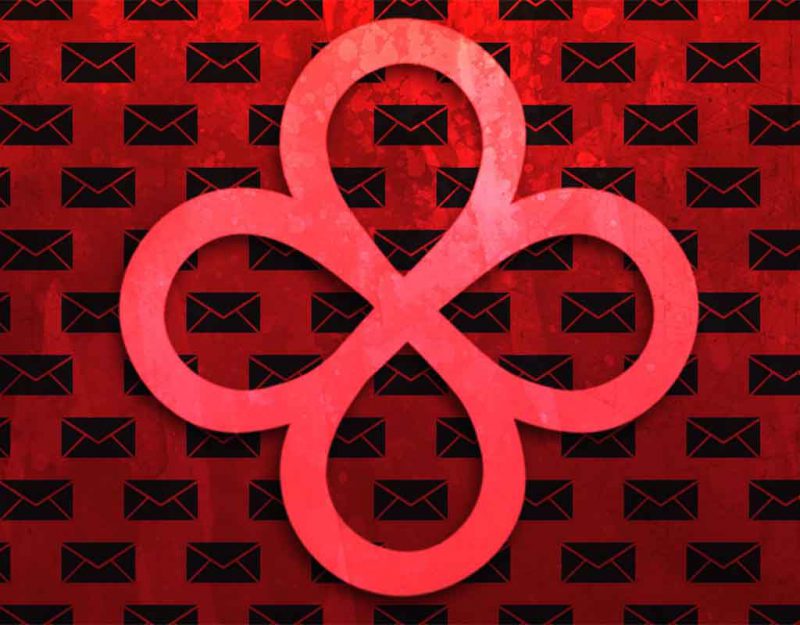 When word got out that the Iron March forum user database had leaked, I reached out to former members to see if they wanted to upgrade from the relatively mainstream National Socialist position to something truly radical like the restorationist trad futurist Ult-Right, and many took advantage of this and signed up to our mailing list.

One of the more interesting internet cultural news sources, The Daily Dot, reached out to see what we were about, resulting in an article entitled “The neo-Nazi data dump has been a boon to Nazi recruiters.” Thanks to writer Claire Goforth, who subtitled the article “Amerika wants to deport all non-whites and create a caste system,” we are reaching out to those who find neo-Nazism not extreme enough:

“If you liked the Iron March forum, you might find Amerika.org to be even more extreme,” the email solicitation begins. “We are Nietzschean, pro-Western, and anti-egalitarian. While our approach is more traditionalist than National Socialist, it is uncompromising.”

According to its website, it advocates for removing people from their home countries based on bloodline, returning to the caste system, canceling immigration and international trade, and instilling power in small pool of elites in a “new hierarchy” where these lucky few would control “all of the money, power, and social prestige/status, so that they can guide us with their greater ability.”

On Gab, Stevens, speaking on behalf of Amerika, repeatedly writes about “the Other.” 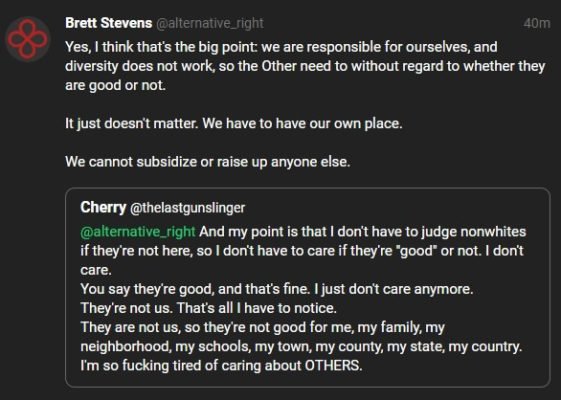 [H]e explained that “the Other” is anyone who isn’t part of the founding ethnic group. According to Amerika, in the U.S. that exclusively consists of Western Europeans, which is obviously just a way of saying whites only.

Goforth did a reasonable job of interpretation for a journalist, considering that our society has so decayed that most of this common sense stuff is like outer space alien speak to your average person, especially one who has gone through college or office work.

Here is the abridged text of my email:

Amerika offers the position that human groups by their nature converge on a series of “committee-like” notions which are always unrealistic and therefore destructive. This means that any society which wishes to survive must raise up the best and oppress the rest. To that end, we favor a caste system to keep the proles in check, and exile of defectives (promiscuous, sociopathic, neurotic, schizoid, developmentally mentally disabled, stupid, sadistic, insane). We also recognize that diversity is dysfunctional because it divides society into warring special interest groups, so we favor the repatriation (with some reparations) of all who are not of the ethnic founding group. We also endorse an eco-fascism which would feature a consumption tax, an end to immigration and international trade, and exile for the obese and useless.

This makes us more extreme than National Socialists or the Alt-Right…Our thinking is more in lines with Fred Nietzsche, Plato, Aldous Huxley, and Pentti Linkola than some of the more trendy names on the Right.

Ms. Goforth followed up with several questions, reproduced here with my answers:

Whom/what groups do you consider “the Other”?

Anything but the founding ethnic group. In Germany, for example, only ethnic Germans — in itself a range of tribes — belong there. In America, our founding group are ethnic Western Europeans (English, Scots, Dutch, Germans, northern French, Scandinavians). Everyone else would have to go back home, and I favor reparations-with-repatriation to keep this fair and decent.

Where do you see Amerika in the caste system you advocate?

Every society has its members situated around its average IQ on a standard/Poisson distribution, or “bell curve.” The top cognitive one percent are your leaders; the next 9% or so are your middle class; everyone else is labor. Within those groups, the best people by competence and morality would form the basis of the caste. This system is derived from the classic European caste system, which is simpler than the Indian version which shares an ancestor with it. Jarls (kings; top 1% or fewer), Carls (artisans/warriors; about 9%), and Thrals (laborers; about 90%) can be found in any society, and some of our class system still reveals this imprint.

As far as Amerika the blog, I can only point to my family heritage and educational attainment to indicate where I would be, which is somewhere in the top half of the middle class. However, I would rather be a peasant in a functional society than a king in Clown World.

Who would sort people into castes, and how would they do this?

Every office has some people who are acknowledged as highly competent because they demonstrate it daily. The same is true of every social group. Those can choose other people they find competent and good as well, and form a pyramid that way organically. At some point, “we” the group needs to relinquish the idea of voting and mass mobilization, and anoint some of competent judgment and good morals to choose others to form a new hierarchy. Richard Spencer alluded to this in one of his talks in Texas; the natural hierarchy is there, but in our egalitarian mass delusion, we refuse to recognize it.

Who would choose a monarch, and how?

Similarly, this group would find from within itself some who are exceptionally competent at leadership, which is an innate skill which must be refined, sort of like how being a top brain surgeon requires certain intellectual, physical, personality, and moral abilities that after a few years of med school and residency (hopefully) come into bloom.

If all people were repatriated to their home countries, i.e. Germans to Germany, wouldn’t only Native Americans–not Western Europeans–remain in the U.S.?

Amerinds are from Mongolia, originally, and were an impediment to the founding of America. I would repatriate them, and keep the founding group that made the country known as America, the Western Europeans.

We can make this society; they could not, and would be happier with their co-ethnics in Mongolia.

Where would mixed-race people be repatriated to?

There are no shortage of mixed-race zones worldwide. Brazil, the middle east, North Africa, and Eurasia all need people. Repatriation, especially with reparations, would benefit those local economies and strengthen all nations worldwide, instead of having a few first world nations suck up all the wealth and power and leave everyone else with the scraps.

As becomes clear, Amerika offers a position far more extreme than any in movement White Nationalism or the neo-Nazi fringe. They want to change this society to express their beliefs; I want to abolish this society and replace it with something functional.

Our approach baffles people here because it is about 50% Republican, 25% hippie, and 25% uncompromising Nietzschean eugenicist skinhead. When you think about it however, reality follows the same pattern. We hug trees, love free markets, and endorse quality-filtered ethnostates because all of these things actually function and produce excellence, where neoconservatism and National Socialism simply produce a slightly better version of Clown World, albeit with some new dysfunctions added.