(((Trump))), Jerusalem And The Missing Intifada

by Jonathan Peter Wilkinson on December 17, 2017 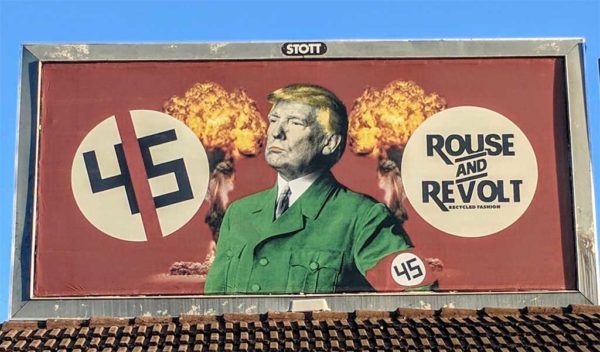 President and Goy Wonder Donald J. Trump totally sold us out to (((Â¡THE BANKSTERS!))) on this one. You see, he actually recognized that place in Israel where King Solomon built his temple, Jerusalem, as the capital of Israel. The US Embassy has begun the process of moving their assets to The Holy City.

You see, this ignorant, blustering, cowboy hick of a reality television show host is certain to touch off WWIII, Jihad Edition. We would have to fight Iran, Yemen, Turkey, Syria, Saudi Arabia, and possibly even Whogivesakhrapistan all at the same time. And all because our (((Preisident))) is a wholly-owned subsidiary of (((The Bagel-Munching Sandal-Wearers))). So universal was the outrage over this craziness that a Reuters Poll of Jewish-American Pedophiles who earn at least $250K per year showed an Approve/Disapprove rating of 41/59. We could tell you the sample size and margin of error, but then we’d have to shoot you.

But seriously, President Trump has just very publicly dissed the EU, the PLO, The Royal and Magnificent Sultan of Turkey, Hamas, Hezbollah, Anti-Pope Francis , Al-CNN and countless other high-profile supporters, enablers and perpetrators of international terrorism. He quite bluntly meant to. President Trump is into sorting crap out. He has an endearing habit of taking people exactly at their word when they are obviously spewing the verbal equivalent of flatulence and feces. It’s a passive-aggressive way to call The Hipsters on their hypocrisy. Here is what The House, The Senate, and President Clinton all passed and signed off on back in 1995 when â€˜â€˜The Jerusalem Embassy Act of 1995â€™â€™ overwhelmingly passed Congress.

STATEMENT OF THE POLICY OF THE UNITED STATES â€”

This, of course, was really a dog-and-pony show. The Jerusalem Embassy Act of 1995 has been enforced about as vigorously as our immigration laws were under Presidents Clinton, Bush and Obama. The act had an escape hatch whereby the POTUS could waiver moving the embassy to Jerusalem for six months. This was typically justified to give “The Peace Process” more time to work or to not inflame “The Arab Street.” Jimmy Carter started “The Peace Process” back in the late 1970s. It grinds on in 2017.

You want peace or you don’t. War is over, John Lennon lectures us, if you want it. Of course the “you” here is in reality plural. Neither of the two you’s involved in squabbles over Jerusalem spend much of their spare time during the winter wishing one another Happy Christmas. One of the parties to the ongoing conflict, The PLO, argues Israel has no legitimate right to exist as a country. It is in their foundational document that they exist to destroy it. Giving them a veto over which city in this non-country we park our diplomatic schmoes in is roughly equivalent to asking Attila, Gaiseric, or Hannibal whether we recognize Rome as the Capital of Italy.

In fact, using the peace process as a reason to delay our recognition is subtle way of making sure their will never be peace in that particular chunk of the Middle East. It’s a perverse incentive if you follow some elementary logic. Party A does not want Party B to have an internationally recognized capital city in Jerusalem. Party A is told that Party B’s desires of having Jerusalem as a capital city will be realized as soon as the peace process succeeds. What sort of drug would you have to put in Party A’s Bacon-Kabobs to ever get them to agree to any successful resolution of aforementioned peace process?

Now none of the people signing these waivers to prevent Israel from proclaiming Jerusalem as its capital are anti-semites. They all have Â¡Jewish Friends! like Harvey (((Weinstein))) and Bill (((Kristol))). I’ll prove it to you. If you go to unbiased social media sites like Twitter, and type in the search term Nazi or racist, President Donald Drumpfsteinthalberg is the Number One Result. So all those people butt-hurt over Jerusalem as the capital of a Jewish Ethno-State clearly have a reasonable alternative. Perhaps we could send them all to Madagascar. I’m sure Sarah Silverman could avail herself to all the quickie aborshes she wanted over there. (((Weinstein)))? He could take his artistic frustrations out in trade.

But no! That Donald Trump has decided to get a wee bit obstreperous and actually enforce a US law about 23 years after it passed. The Arab Street has erupted in a manner reminiscent of…a boring Saturday night for the police force in Newark.

Rather than waves of protest, the waiting world got tepid statements of disapproval from otherwise-occupied Arab governments; demonstrations in the West Bank and the Gaza strip that, combined, barely put a thousand activists in the streets; and yes, four deaths: two demonstrators and two Hamas terrorists hit by an Israeli airstrike.

So why were the experts wrong? I mean aside from the fact that the story involved Trump which pretty much implies that most of them will be lying. For one thing, you don’t bring it against a man that dismisses Kim Jung Un as “Rocket Man” and dares him to pop any nuke he can develop. Unless you bring all the junk you can fit in the trunk. They can just ask ISIS or MeAgain Kelly what it’s like to get on Spanker-Claus’ Naughty List.

People are increasingly learning that when it comes to taking on Donald Trump, you need to mean business. The man unafraid to die typically wins the fight. Trump’s rather public finger in the eye to the PLO is a direct, public way of asking the Palestinians how many of their Jihadi are ready to die. The answer is that they’re willing to die another day. That happens when the US elects a President far more real than Clinton, Bush or Barack Obama.