When The Wall Comes Tumbling Down 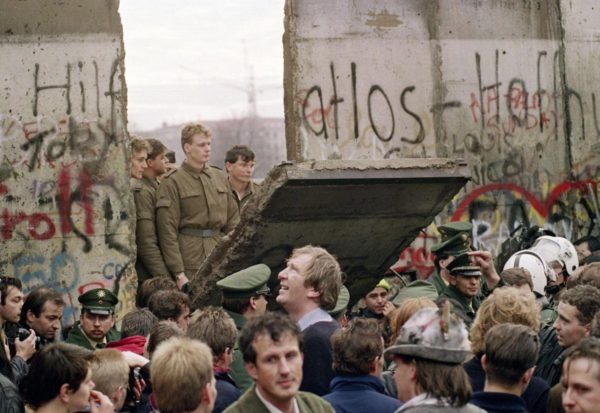 A silence fell over the West today: the silence of not noticing a great event which has been building for some time. Like the fall of the Soviet Union, it has grown first in darkness, then in offhand casual remarks, and finally as a strong will expressed through uncompromising language. And now, a wall has fallen and for the first time, we can see the world beyond the managed environment which is the politically correct West.

In Aurora, Colorado, the unthinkable occurred — an anti-white hate crime was accepted as such from the initial investigation:

Police in Aurora are investigating a sexual assault that may have been a racially-motivated crime.

…Early Friday morning, two African-American men sexually assaulted the woman outside the shopping center. Police say the victim, who is white, didnâ€™t know the attackers. During the assault, the men yelled racial slurs at the woman before fleeing the scene.

Aurora police would not comment on whether the case is being classified as a bias-related attack.

Not very impressive at first, it seems. But until the torture of a disabled man by four African-Americans was reclassified as a hate crime after public outcry, the highly politicized American police — who want to keep their jobs — would have been speaking out to clarify that this was not at hate crime, as they did with the carjacking of a Trump supporter some months ago and at first, with the Chicago torture.

The wall has fallen, and those who were presumed to be the enemy are recognized as human again. Much as the world wanted to punish the Germans for WWII and then, in 1989, realized that the Berlin Wall was a great injustice, and then realized in 2016 that however wrong his methods were that Hitler was right about the incompatibility of different ethnic groups, and the suicidal insanity of even microscopic amounts of Leftism, we now realize that white people are human, too, and have a right to self-interest.

Even more than that, we are seeing a recognition that equality has failed. To implement equality, one must raise the lower or demote the higher; since the lower would have risen if they could have, this means in reality that equality always indicates a need to penalize the more successful to subsidize the less successful.

This anti-moral, anti-Darwnian approach is universally popular because people, especially smarter ones, view themselves as failures and see a need to be protected against the judgment by results that is the nature of reality. People want human intent, a cross between solipsism and social approval, to regulate who is acceptable, instead of results, because often results turn out badly, frequently by chance alone. Our fear leads to an addictive and compulsive illusion through the notion of “equality,” which means “equal inclusion” in reality, or forced social acceptance.

With the backlash against egalitarianism, which is such a mentally addictive concept that it becomes an all-consuming Moby-Dick or Lord of The Rings style obsession, the West is reversing the past centuries of decline. Egalitarianism is the root of ideology, or the notion that what humans intend is more important than what has worked in reality in the past; as egalitarianism falls, it will be replaced by realism, or the study of reality.

Prepare for a roller coaster in the future.

Meryl Streep’s Pidgin English | Leftists Are The Party Of Human Intent, Which Is Always Wrong