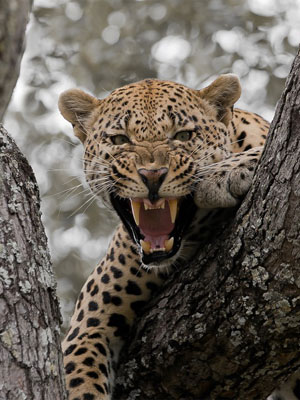 As satisfying as it is to see a man triumph by calculating his position, adapting to his surroundings and conquering it through logic, it is equally satisfying to see a fool miscalculate, over step his boundaries, and suffer the violent consequences of the untamed wild. This is cosmic justice. This is why it is better to be five steps behind your limit than even one step beyond it. This is why you err on the side of caution.

The notion of a boundary or limit is sort of a head scratcher. I can build a fence between my neighbor and myself. This now designates the boundary. Of course, my neighbor could just hop the fence. We see boundaries on maps, but not in physical reality. In the absolute sense of reality, nature, and the wild, there really is no such thing as a boundary. A boundary is simply a useful notion that we believe in, lest life would be unlivable. Therefore, it is not so much â€œunrealâ€ or â€œimaginary,â€ as it is a creative solution.

Often, much of our intellectual enterprise is hostile to things that cannot be â€œproven.â€ It is also hostile to creative language. Things must be very neat and tidy and perfect so that everyone can potentially understand it. The rebellious spirit may say, â€œI do not see this boundary you speak of, you are just making up a word to keep me from total freedom.â€

Similarly, a standard is just like a boundary. But rather than being a creative, useful idea, that allows people with different talents to coexist, it becomes an imaginary, authoritarian imposition.

In a certain sense, it must be admitted that a standard is â€œimaginary.â€ But this is only in the sense that it cannot be seen with the eye. The â€œproofâ€ or usefulness of a standard, or boundary, or limit, is seen in the consequences of its observance or non-observance.

When the first band of cavemen lurked out of the primordial cave to slay a wooly mammoth, one of the more dim-witted cavemen was probably taken with the fuzzy mammoth and he went over to pet it. The next thing he knew, he was impaled on its tusk. The rest of the cavemen huddled together and agreed that the proper boundary between themselves and a wooly mammoth was about the length of a spear. Their comradeâ€™s corpse was all the proof they needed.

So it must be admitted that a standard actually is an authoritarian imposition, if you consider death to be an authoritarian imposition. This is why it is silly to constantly question authority and the wisdom of the past. To do that, is to be like another caveman that goes up and pets the wooly mammoth. This is why trust and belief are more powerful than skepticism and knowledge. This is why specifics are more misleading than generalities. Dim-witted caveman #2 says, â€œWell that wonâ€™t happen to me!â€ as he is gored and flailing on the mammothâ€™s other tusk. Dim-witted caveman #2 decided to â€œthink for himself.â€

Some people like the cute animals at the zoo: penguins, otters, koala bears, and Toby the red panda. I always preferred the tiger, the rhinos, the lions, and the polar bear. Dolphins communicate with humans; great white sharks eat humans.

Apex predators are the living incarnation of the limit and the boundary. If you want empirical evidence there it is. I was too young to remember it, but there is a story at my local zoo. I have heard the tale many times. Some drunk, idiot bum, fell over into the polar bear exhibit and they had to shoot the polar bear to save the life of some vagrant with a death-wish. I always thought that was a shame. Maybe the Romans were onto something with the gladiatorial games.

I wonâ€™t deny that I felt a certain sense of glee when I heard Roy got mauled by his Bengal tiger. I seem to also remember a killer whale killing its handler at Sea World. It is a killer whale after all.

I have the utmost respect for Steve Irwin and I think that some of the guys that do this kind of thing really get it. I bet Steve Irwin has the utmost respect for that sting-ray, too, and I bet he forgives it. The cut worm forgives the plow. Steve Irwin knew how to â€œdie at the right time.â€ It was a mythical death and very appropriate. There is no shame in this. To be killed by the wild is a kind of destiny and honor. Jane Goodall could learn a lesson here.

There was a terrifying story a few years ago from Connecticut about a pet chimp ripping a womanâ€™s face off. It was captured on a 911 call and you can hear the chimp screaming in the background. I donâ€™t think Iâ€™m the only one that laughed at hearing an elderly woman call the police to tell them her elderly woman friend was in the process of being disfigured by a monkey. All the while you could hear the monkey laughing in the background, jumping up and down in triumph. Curious George went bad and Curious Humans went stupid. Curious Human Visits the Emergency Room: the Revenge of Curious George!

As Robert Frost said, â€œDo not tear down a fence until you know why it was put up.â€ The fence might be there for your own good.

If conservatives want to start a serious environmental movement, donâ€™t cast nature and wildlife as the victim. Donâ€™t play on peopleâ€™s sympathies and pity. What will happen is people will identify too much with only the cute animals and the exceptions to the rule. At that point, the boundary is blurred, and it becomes a victim movement co-opting animals as symbols. It becomes completely â€œhumanistic.â€

The problem with a â€œpreserve,â€ as in a wildlife preserve or nature preserve is that you are playing total defense and evasion. You are thinking backwards and counting backwards. Rather than counting from 1 to infinity, you are counting down from infinity to 0. It is a countdown unto destruction. You posit total defeat and destruction at the end, and you are simply staving off the inevitable. You are already dead.

Instead, play up the â€œauthoritarianismâ€ and consequentialism of nature red in tooth and claw. Work in a factor of reversibility showing the possibility of triumph. Have a sense of humor and â€œcelebrate death.â€ Who do you want on your side in battle, Flipper or Jaws?

If you want humans and wildlife to coexist, then the best way to illustrate this is to show what happens when civilization crosses the boundary into the wild. Celebrate the mythical deaths of humans that get too close to nature. Otherwise, Toby the red panda just might rip your freaking face off!

The economy is not coming back | Chinua Achebe