A game of poker 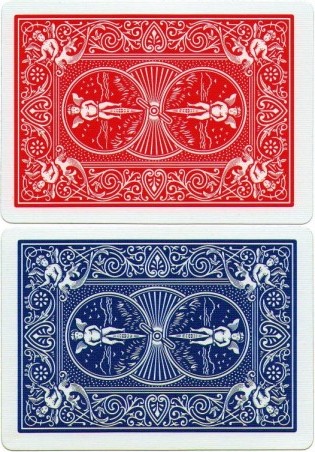 Pascal’s wager is an awesome yet simple idea. It can be applied to nearly anything, not only the existence of God.Â

Forgive the lack of subtlety, but it basically boils down to:Â on which side will you err? It points to a sort of “meta-intelligence” that reasons about reason.Â One might call it an exercise in damage/loss-minimization but also an exercise in potential-benefit-maximization.

Why not try this:Â assume you will err, assume you cannot “know.”Â  The decision then becomes not between right and wrong, but between erring on the “right” side and erring on the “wrong” side, and to what degree.Â You might say the modern intellectual enterprise is a bad gambler.

It’s like a game of poker.Â You don’t play each hand with regard to the context of each hand, you play the hand against the context of the entire game (past hands and future hands).Â It would be the entirely wrong mindset to try to figure out what cards your opponent is literally, specifically holding.Â

Even trying to read your opponent’s “tells” is playing with fire.Â  Instead, you simply try to figure out if the overall picture is just not adding up.Â You manage your stack judiciously.Â  You take into account your position:Â are you on the button?Â are you the small blind?Â  are you last to act?Â how much have you already invested in the pot?Â how many of your opponents have stuck around to see the last card, one or three?Â has your opponent been betting erratically or miserly?

Phil Hellmuth loses hands all the time, yet he’s managed to make a career out of playing poker.Â You basically play the “meta game.”Â  When you’re playing with house money, then you can take bigger risks.Â Or, on the other hand, if your stack is low, and you are being “nickle and dimed” to death, you have to make your stand because your potential benefit is becoming negligible.Â Or, even more creatively, perhaps you are certain you have the losing hand, yet it is worth it to pay off your opponent so you can see his cards for future reference.

Another example: in the game of American football it would be disastrous strategy to throw the kitchen sink at you opponent play after play.Â Those “boring” 2 yard runs up the middle setup future plays and keep your opponent honest.Â

Conversely, you’d rather not open up the third-quarter with an onside-kick this early in the season, but you lost your first four games and you’re feeling the heat, if you lose this game you won’t even be around for the playoffs anyway, so let ‘er rip!Â  Each game is a game, but one might say that the entire season is also one big game.

The broader point is this:Â reality is more like a mystery than an answer waiting to be discovered.Â Discourse that hopes to decipher reality in this direction is an exercise in futility.Â Rather than being an answer, that we ask questions to, reality is more like a question thatÂ we have to answer to.Â It won’t announce itself, but it might wink at you.

What is ‘Equality’, anyway? | Why being tough on crime keeps society from imploding