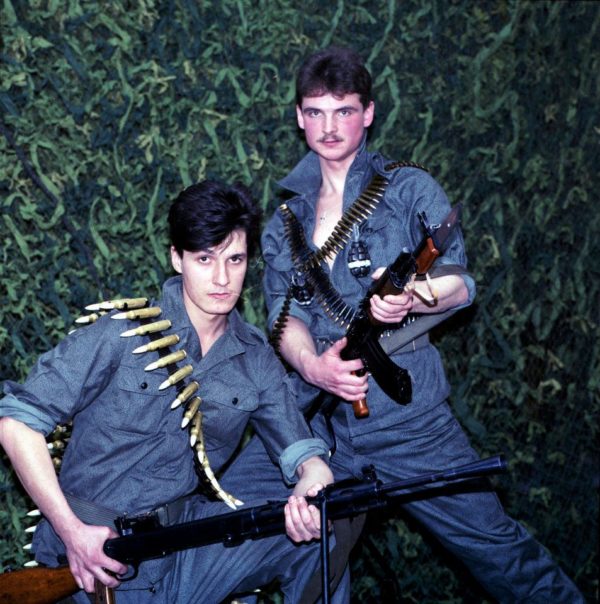 The Right is obsessed with finding the root of our downfall, and it will be our doom if we let it continue. We are wondering how deeply the rot goes, which is another way of wondering out loud what we can trust in a wasteland of failed ideas, lies and corrupted institutions.

In my reading of history, the answer is simple: any time herd behavior takes over, which always happens, human institutions begin focusing more on unity than purpose, and through that lose unity, because focusing explicitly on unity causes us to concern ourselves with bribing and cajoling people to stay in line. That then empowers them to act in chaotic, selfish ways.

Our society hit this one hard simply because we were good. We rose above the rest, and beat all of the relatively simple challenges of early civilization, but that meant that we then encountered other challenges that were harder. We leveled up, and the new level boss is more of a beast machine than any of the others.

People keep looking for “automatic” reasons that we failed, all of which are essentially versions of, “well, that’s just how things happen, everything fails over time.” This attitude is an artifact of our time, where everyone is having a screaming tantrum in order to avoid seeing the truth:

This was a choice. We made a bad choice. It did not need to happen. We screwed up and wasted centuries and many lives.

There, I feel better now that I have gotten that out. I know the temptation to rationalize/justify is immense, and I am sympathetic to those caught in its grip, because who wants to face the fact that most of their lifetime is wasted on garbage, their society is thrown in the dungheap, and almost all recent achievements are landfill? But that is what equality does really well: destroy things.

In fact, as written about on this site, what kills civilizations is the same thing that kills other human organizations: they focus on their members instead of their goals, creating entropy because each member, when encouraged to do so, will name something different that they want as a way of demonstrating that they are unique. This enables them to stand out from the crowd and socialize with others more effectively.

As Anonymous Conservative was kind enough to point out, this puts me and people who think like me at odds with most theories of our decline, including the notion that imbalance between r/K reproductive strategies is the origin.

In my view, the r/K strategy differences are inherent to humanity because of the way the standard distribution works. In any group of things, there will be variation of any given attribute that approximates a bell curve; for this reason, there will always be mostly r-strategy people in the lower castes, and K-strategy people will occupy the upper castes.

AC’s explanation of r/K strategies shows the deeper problem, however:

One microbe might find that other species of microbes would take their food, or even eat them, and these threats too, had to be dealt with through expenditures of energy, and the production of still other materials. The food available to them was limited in nature, and thus they would evolve complex machines designed to only digest a specific compound or compounds, to exploit a specific niche. They might even evolve to alter their metabolic processes, extracting energy less efficiently, but producing metabolites which killed their competition.

As a result, these organisms would spend a lot of the energy they consumed doing a myriad of things to survive, and this energy would, as a result, not go into reproducing. In nature, any microbe which did not have all of these adaptations would be quickly killed, and would be a Darwinian dead end. Thus those I isolated were programmed by eons of evolution to expend a lot of energy on a lot of complex efforts to keep themselves alive in their natural environment. As a result of all of this magnificent complexity, they grew quite slowly following their isolation.

On Tryptic Soy Agar, however, millions of cells would each grow freely, absent any selective pressure like that applied by nature. Invariably, a few would lose a gene here or there, which would disable some of these complex adaptations to their natural environment. These cells, now unburdened by these complexities, would channel all of their energy into reproducing their simpler descendents, and they would grow faster. Instead of preparing to fight off the microbial hordes, they would simply focus on converting substrate into new (simplistic) cells, thereby reproducing as quickly as possible. They would out-populate their more complex peers, and eventually become the defacto form of the isolate.

In many areas of life, and in the West since the Mongol invasions, the simple truth has been that whoever produces the most people will not be clobbered by his neighbors, and when it comes time to launch industry, he will have plenty of warm bodies to do that, too. This probably goes back even before agriculture, when warring bands ran at each other with swords and spears.

In fact, the history of Europe may be that of a roving band of people who avoided such behavior, and as a result were able to refine themselves to a higher degree of ability, even if that meant that they had to avoid conflict by remaining nomadic. When they settled in Europe, they became prosperous, and this allowed them to become bottom heavy with r-strategy people.

For many centuries, an aristocratic system kept this in check by relegating proles to subservient roles. After enduring many crises, including the Mongol invasions, the Black Plague, Islamic invasions, religious wars and the imperial wars following the rise of ancient Greece and Rome, the European aristocracy gradually began to fall behind in numbers.

Eventually, the mercantile middle class — people who were good at making money, but were not bright enough to foresee the problems with their desire for more — and the proles joined together and overthrew the aristocrats. Since then, our civilization has been in the final stages of decline.

My guess is that the decline began even earlier, after the end of the nomadic days, when the rise in fixed civilization essentially made the leaders beholden to spend most of their time taking care of the rest of the herd. This is the nature of any human group, and the only solution is to have a strong internal hierarchy, but that was weakened by crises.

If we make a bad decision, we can later stop doing that thing and then reverse it, and it is that for which I argue. Instead of seeing a two-stroke cycle by which society gets good and then inevitably fails, so that it is no one’s fault, and then society gets good again, I see that we made a bad choice and must resolve to never do that in the future.

Another view of this can be found through a view of population roles:

According to Eric Gans, the first human scene, upon which we can model later ones like that sketched above, is more precisely specified. Here we have a desirable object, presumably some food item, at the center of the not yet human group: these advanced, highly imitative apes, have their appetite for that central object inflamed, made into desire, by the awareness of the desire of all the other members of the group. This intensifying desire overrides the animal pecking order that normally maintains peace within the groupâ€”the alpha animal eats first, the beta animal eats when the alpha is finished, and so on. The alpha could never withstand the force of the group as a whole, but animals never â€œorganizeâ€ themselves as cooperative, coordinating groups. Now, as all start to rush to the center, the animal hierarchy is abolished. What takes its place, according to the originary hypothesis, is the signâ€”what Gans calls the â€œaborted gesture of appropriation.â€

If we go back to the simple scene outlined in the beginning, we can see this is a difference between those who are first on the scene, and those who are secondâ€”for simplicityâ€™s sake, we can just call them â€œfirstsâ€ and â€œseconds.â€ The seconds establish the guardrails around the firsts as the latter do their work, and they make for the â€œinterfaceâ€ between the firsts and those who gather around the scene (the â€œthirdsâ€). They will also decide which resources get called for and which get through to the firsts, who are too busy to see to such details. There is no inherent conflict between the firsts, seconds and thirds, but there is the potential for all kinds of conflict. The firsts (and the first among the firsts) should rule, and should be interested in nothing more than enacting all the signs of deferral that have been collected through successive acts of rule. Even defense against external enemies is really a function of enhancing the readiness of the defenders of the community, and the community as a whole, and doing that is a function of eliminating all the distractions caused by desires and resentments, with the most attention dedicated to where it matters most. The seconds should be filtering information coming from below, marshalling resources, and transmitting commands and exhortations from the ruler. And the thirds, the vast majority of the community, should be modeling themselves on and ordering their lives in accord with the hierarchy constitutive of the community.

Like r/K strategy theory, this explains how people corrupt their own organizations, but not the cause. The fundamental cause is a failure of hierarchy, usually brought on by many sustained threats, and its replacement with an order based on social concerns, like what is popular and who wants to do what.

The West has avoided this realization for some time because it means that we are the source of our own failure, and that we must actually change in order to fix it, including rejecting the idea of equality. External “this just did it to us” theories make it easy for the individual to continue his path of hubris without accepting responsibility for the role of individualism in our decline.

The Long View | Why It Is Time To Replace The Constitution