Philosophy — is it useful? 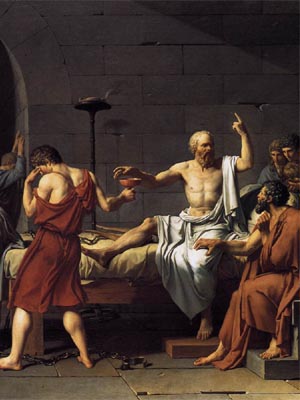 Brett Stevens recently pointed out to me that one could launch an attack upon philosophy by stating that language is deceiving; it can be deceptive by deliberate use, by inexact use, or by shifting meanings through time. It hopes to describe truth, reality or pragmatic adaptation through symbol, language and structure — these symbols can be easily manipulated.

I had to admit to Brett that it was hard to defend against such an attack, albeit it might not be impossible. The first step is to make clear that in order to accept this argument, one must already have subscribed to the picture that we are taking in knowledge through symbols. Then it becomes impossible to fact-check whether these symbols are really in accordance with the world, because we can only compare our knowledge with other symbols and not with the world directly. This is the Postmodernist’s claim that our knowledge relates to symbols. They basically argued that all language is a web of references in which the distinction between fact and fiction is ultimately severed because our knowledge relates to our narratio about the world. When we think we are assessing the facts of the world, we are merely playing a language game within the very narratios we’ve constructed.

narratio, n.: the statement of facts

The second part of a classical oration, following the introduction or exordium. The speaker here provides a narrative account of what has happened and generally explains the nature of the case. Quintilian adds that the narratio is followed by the propositio, a kind of summary of the issues or a statement of the charge. – BYU

I suppose the instrumentalist would try to save his neck by saying that it doesn’t matter what those symbols are or what they come from, but that the only thing which matters is whether or not our knowledge allow us to achieve our goals. Question then it, what he would mean by “ours”, since the goals he expresses are necessarily borrowed from a web of language. The moment we express “the self” we are articulating a construction. Thus the self is fiction.

The next argument that might be mounted is that â€œcontrary to science, philosophy is of no use.â€ Question is if science and philosophy can be separated. Not only because scienceâ€™s greatest heroes considered themselves philosophers, but also because every science comes equipped with a set of core assumptions and philosophy is equipped to investigate these.

â€œScience gave us penicillin, Science invented the lawn-mower. What did philosophy ever do to make our lives better?â€

Basically, by constantly inquiring what the utility of some thing is we are creating our own nihilism. â€˜Useâ€™ is a term that only makes sense if conceived as the relevance of a thing within a plan of steps to reach a goal. But ultimately people have different goals, so if my goals are not yours, then nothing is useful by definition, and I also wonâ€™t be able to express the use of what I happen to be doing . . . I suppose it all goes back to a certain sense of satisfaction that can only be had from sharing it with another.

This is where things get tricky, because now we approach the point where we say the value of goals can only be measured in relation to the narratios of which those goals are part. From that it follows that whether one ought to pursue a specific goal can only be meaningfully discussed as long as one partakes in the same symbolic universe.

Then weâ€™d be basically arguing like Hitler did in Mein Kampf, that the question of objectivity should be immediately disregarded the moment the nation, the race, the people was concerned. According to him, the only question worth objectively considering was how one could expand the power of his own people at the cost of that of the others.

But hey, whoâ€™s to blame him if there are ultimately no inherently valuable goals but only goals that are subjectively valuable to those who subscribe to the narratio from which those goals are derived? This also explains why the most fanatical Naziâ€™s at Nuremberg didnâ€™t consider the trial as a form of punishment, but as conquest. They simply felt they were being judged according to the standards of a narratio that wasnâ€™t their own.

At this point weâ€™re tempted to say that might makes right and that there are no universal standards of justice, values and morality outside of the competition between the different narratios that exist on earth. This is how China, since it subscribes to the Marxist doctrine of base-superstructure, regards the Western idea of Human Rights: As an attempt to â€˜colonizeâ€™ the legal sphere of other nations.

One could see Nietzscheâ€™s claim coming: That the narratio giving account of itself as being backed by values and standards that are universally true or intrinsically superior, is simply pumping up itâ€™s own power further, without coming clean for the sheer rhetoric nature of that attempt.

But another deeper problem that consequently emerges is this: If everything is just a language game and there is no universal Truth or inherent value to anything, then why would we even do what do? Why would we act in this way and not that one? At first we would think: â€œOh cool! We can go to the U.N. and deceive others and grab power. We can do anything if we play it smart!â€ A moment later we would realize that although we could try to do anything, those pursuits would ultimately be vacuous, sterile, empty.

The reader might be getting curious about what I mean by: â€˜universal Truthâ€™. So, if asked to the man, I would give the following example:

â€œThere’s a hierarchy of consciousness, and it is a part of the unmalleability of existence that most of the population dwells on the lowest levels, driven by petty motives. Democracy can only work when the population is wise and critical. When that is not the case, what is needed is a hierarchy lead by sharp minds able to perceive clearly, possess knowledge for a thorough understanding of occurring situations, combined with the Character required for steadfast action and resolution.â€

The only way to separate Truth from falsehood in the different existing ideologies is through philosophy.

My conclusion is that I’m not sure if defending philosophy on the grounds of its utility would be the right course of action. Because usefulness always indicates going from situation A to desired situation B. But how do we know when weâ€™re right when we embark for B in the first place? One might as well say the whole of life should just exist to make philosophy possible, so that we can ask ourselves the question what the aim of life is â€“ to then take it on in a serious and objective matter. As a species, we rise above ourselves the moment we realize that, although our life has been given to us, we shouldnâ€™t accept it just because we happen to have it. We should be able to question life. Our ability not to accept a life of no value â€“ therein lies the nobility of the human spirit.