How To End Racism 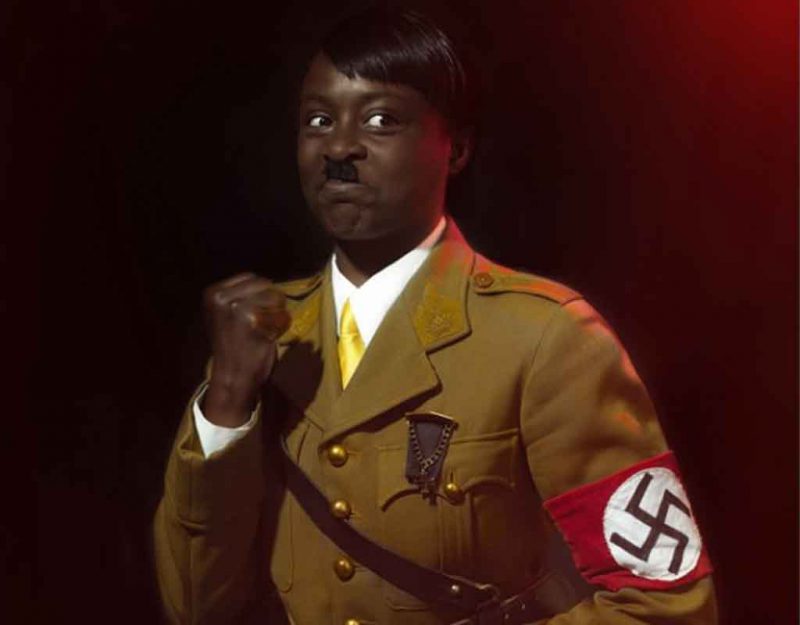 Donald Trump displayed brilliance with his recent tweetstorm about exclusion, in which he said that people who come to America for what we do well should not then try to remake their own countries here.

This has prompted the now-familiar Conversation About Racism, in which each person — per the idea of democracy, equality, and utilitarianism — expresses their own concerns, then everyone has a good cry, and we go about our meaningless corporate lives feeling as if “something” was accomplished.

Under Obama, these “conversations” were basically struggle sessions. These were a typical Leftist invention:

In the struggle sessions the accused, often teachers suspected of lacking proletarian feeling, were paraded through streets and campuses, sometimes stadiums. It was important always to have a jeering crowd; it was important that the electric feeling that comes with the possibility of murder be present.

Dunce caps, sometimes wastebaskets, were placed on the victims’ heads, and placards stipulating their crimes hung from their necks. The victims were accused, berated, assaulted. Many falsely confessed in the vain hope of mercy

The struggle session seeks to make you think that everyone else agrees with the dogma and that you are a loser and a failure for not joining the crowd. Everyone else cheers to show their loyalty, and so the group instead of the government enforces control on you.

We live in a similar state. Any time a white guy is accused of racism, he loses his job. His wife declares she had no idea, packs her bags, and serves him divorce papers via text message. His kids run for their lives. His friends stop taking his calls. He dies alone in a dingy apartment, working third shift at Wal-mart, surrounded by pictures of the life he once had before he said that one dangerous thing.

There is no compromise with that, by the way. When you face a force that is that controlling, you will have to destroy it and remove anyone who supported it. You do not have to kill them, just send them somewhere else. 50m American liberals descending on Venezuela would do the trick.

Unfortunately, conservatives keep chasing the great socially-acceptable hope, forgetting that after the Long March Through the Institutions, socially acceptable means politically correct. We live in a time of Leftist dominance of our culture.

Gramsci never talked about the “seizure of State power”. Despite that, in a certain sense he did indeed believe in seizing state power; though not, of course, through violent revolution. Instead he talked of “becoming State”. That is, the Marxist vanguard — on behalf of the working class (of course) — would become the state. Alternatively they would “take over the institutions” of the state (the police, the law, political parties, the civil service, councils, etc.) and even the institutions which are not ordinarily deemed to be directly part of the state (e.g., the churches, charities, regional/national newspapers, the universities, schools, etc.). (Rudi Dutschke called this the “Long March through the Institutions”.)

Since they grew up in that culture, not an organic culture but a political culture, and want to convince others that conservatism is a hip thing to do, public conservatives try vainly to be both anti-racist and realist, forgetting that “racism” is a Leftist ideological construct and not reality:

Stop talking about it. Interesting idea, isn’t it? I doubt Cory Booker would approve. ‘The Squad” would doubtless go apoplectic. Nevertheless, it’s the only way to end racism—stop talking about it. We already have laws against it, for a long time now, as we should. And they should be strictly enforced. But the rest of the blah-blah has got to go. It only makes people hate each other. It creates racism rather than solves it.

And now we are where we are—in the land of AOC and Omar—every one of us racists until we die. The revolution eats its own.

If you dig down into that one, you find the old bourgeois ideal: just put your head down, work hard, socialize with clients, and soon you will be wealthy and can buy your way out of the disaster. Don’t notice race and it will not notice you!

Conservatives are addicted to trying to use the arguments of the Left against it. If they call us racist, we will turn around and call them racist for mentioning race. This is nonsensical babble when you analyze it structurally, as you must always do with philosophical arguments.

In reality, “racism” and “racist” refer to one or more of these:

The Left specializes in claiming that the first two are the same as the third, when really they are radically different. Of course groups are not equal; no two things in nature are. They are adapted for different environments, after all. And of course we each prefer our own. This is just realism.

Perhaps there is even a point to the third. Maybe there is a hierarchy of races, but if so, that implies a duty of stewardship toward whoever is below you on the pole, and that seems like the usual egalitarian insanity to me.

No, perhaps the old realists were right after all. The groups are not equal; they do not understand the same things, like the same things, or mean the same things by the identical words that they use. They are simply each their own planet, doing its own thing, trying to survive by its own standards.

America thrived because its initial groups — at least the people who made decisions, not the enslaved labor or outsiders — were all ethnic Western Europeans (English, German, Scots, Dutch, northern French, Scandinavian) and therefore, shared more culture than they lacked.

We cannot teach culture because it consists of genetic inclinations toward certain behaviors, aesthetics, and attitudes. These are things of the blood, not of the propaganda or the classroom. You have to be born of a culture to understand and uphold it.

Looking further into this, we can see that the Iron Rule applies to all groups, ideas, and individuals. It says that every thing acts in its own self-interest alone. That means that diversity will pit different groups against each other, fighting for control.

Unity makes healthy societies. Diversity does not. We have no recorded historical incidences of racism without diversity. If you want to end racism, the only way to do it is to start talking honestly about it, and realize that diversity does not work and cannot work.

Like other non-functional policies, it needs to be repealed and the damage fixed. We will need to send away everyone but the ethnic Western Europeans, and then rebuild a society for us. Let the rest of the world solve its own problems; we are not here to save humanity from itself.

In an ethnically homogeneous society, we will have to face our need to establish an order that works for us. We will have to get over our longstanding problems and disagreements. We will need to focus on something more than our personal pleasures.

Everyone fears this. They like the chaos that equality, diversity, and permissive social rules apply. We get anarchy with grocery stores, and people like that. It allows them to indulge the demands of their egos.

However, we have now come to the end of the line for anarchy. We need social order back, and the way that we have pursued since WW2 — Leftism, including class warfare in diversity — has both failed to fix any problems and introduced new ones.

Diversity is a dead man walking. It is dead because no one believes in it anymore. To state this is not “racist,” but practical. More than one ethnic group occupying the same space leads to conflict. The only way to end racism is to end diversity.