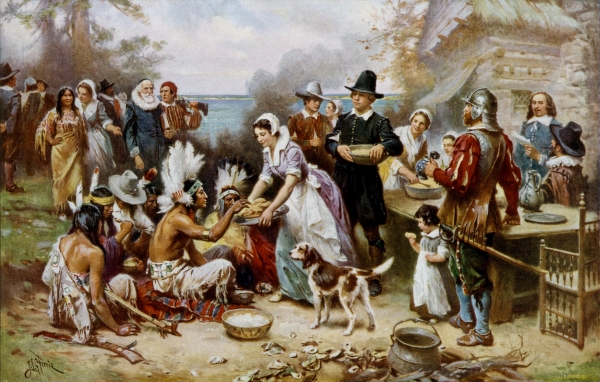 The opposing sides have politicized Thanksgiving. To the left, it was an advance vanguard for colonialism, slavery and sexism. To the right, it was a celebration of freedom as an abstract.

In reality, it was a practical celebration. The colonists came not to conquer a continent but to escape the rotted political situation in Europe. Since the Magna Carta, which ended the divine right of kings and let financial and popular interests have control of European nations, life in Europe had been a series of political conflicts as one might expect would happen when you replace a single authority with an ad hoc one.

To those early colonists, Thanksgiving was a time of respect for what they had survived as well as what they had left behind. Here was a new beginning and new neighbors, who they viewed more like we view inhabitants a neighborhood away than as another nation-state they must conquer.

They were aware of course of the difference between tribes. The white tribe came from a very organized society which prized learning; the natives, on the other hand, valued practical skills and not much else. There was a large gap in intelligence, learning and ability between them, but at first they were able to be collaborators toward mutual survival.

Only later, after someone shot first and the first rapes and murders occurred, did this relationship sour. But in its initial stages, they saw themselves as strange new neighbors from whom much could be learned, and much could be shared.

That conflict set the tone for American adventures: different groups never mixed. First the Indians, then the African-Americans, then the near-whites from Ireland and Southern Europe, then finally everyone else. The official policy is that we must insist all groups are identical despite history and genetics showing us this is not the case.

As others have noted, when you put the herd in charge through these ad hoc systems of government, you get mob rule. The herd has delusions of its own grandeur and prefers to think of short-term pleasurable illusions rather than practical, logical truths. And thus decay accelerates.

Now Americans are looking toward a different future. We are again fleeing a political disaster where popular opinion has rotted away common sense, but this time we cannot blame the English — it is our own nation-state which has rotted away. As a result, people are breaking away, becoming colonists in their own land.

Doubters warned us that if we combined too many different people in the same society we would achieve a lack of direction. That happened in the 1960s, and then we decided that we would all be individualists, since we no longer had culture, religion or convention to go by. The 68ers threw those out the window.

As the Barack Obama presidency winds down predictably in a heaping ruin, Americans of the original type — sensible, Western European stock who take delight in a job well done — see how they have been dispossessed. How it happened with pleasant words and pleasant thoughts about how people were suffering just next door, why not let them in? Our fond intentions created an ideology every bit as Soviet and totalitarian as the former USSR or the Terror in post-revolutionary France.

We the Americans of the future are fleeing a political disaster created by politics based on what we wish were true, instead of what history shows us is true. We have 6,000 years of recorded history and what works and what does not is very clear. We are fleeing not just the cultureless hipsters, the lawless multiculture, the corrupt and larcenous nu-elites, but also the problem of ourselves, at least when we choose democracy to rule ourselves.

I suggest that all Americans of this nature sit down with family and friends this Thanksgiving and give thanks. Give thanks for your lives and the amazing chance at potential beauty that life itself is. Give thanks for all we have escaped. And when you get up the day after Thanksgiving, resolve that you too will escape the political disaster and set up a better life for your descendants.