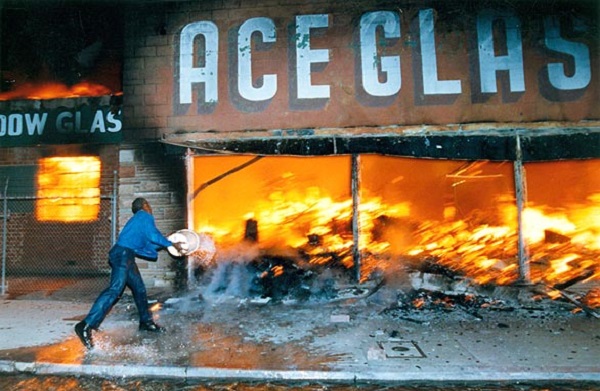 Another night, another fire. We burn our cities for our own pretense, unwilling to admit that our good intentions lead on a path to hell. But they do. And the fires burn.

We were warned by the ancients who told us that the identity of a nation is of vital importance. With identity, we unite on a common culture, heritage and values. This requires us to have roughly the same heritage, which is taboo to liberals.

The group named “liberals” is composed of individuals with one goal: remove social standards. When you remove social standards — morals, values, culture, customs, ideals — you remove the possibility of being wrong. And so you remove consequences. Liberals want no one to face the consequences of his actions. This is because each individual in the liberal audience wants to be absolved of responsibility for his actions.

To that end, liberals support a number of ideas that destroy social standards: sexual promiscuity, diversity, drug use, socialism. The goal is to destroy society. Then only the individual remains.

In Ferguson, MO tonight we see yet again how diversity fails. It fails because it must put one ethnic group on top, and others below, so that they then destroy the group on top. Soon what is left is a giant mixed-race group like that found in every third-world nation on earth. Diversity is a path to civilization collapse.

In the USA, they have told us for 200 years that the problem is white “racism” — a word with no meaning created to shame those who oppose diversity and for no other reason — and that without this, everything would be fine. But we see that this is a one-way street. Being “not racist” means that you always give up: give up your money, give up the power, give up your future. And as we see under Obama, that leaves a devastated Soviet-style society.

You would think people would learn from history. History shows us many things, but never a diverse nation thriving. Only falling, down into a pit of third-world decay from which it never emerges. One side blames the other, but neither wants to integrate. They each need their own standards, values, heritage and culture.

“Violence is not the answer,” say the talking heads. But nothing ever changes. The design itself is broken. Diversity does not work. It produces alienated people who periodically destroy each other. The elites stay in power and everyone else suffers. And we do it again and again. Detroit, Los Angeles, New York, Ferguson. Each time it happens, we clean up and pretend it never occurred. Then we go into denial and prime the fires for lighting again.