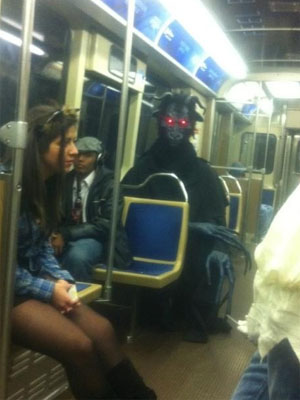 The ancients saw demons haunting people who acted irrationally. They also feared certain phrases or images that could capture the mind and enslave one to demons.

I used to think, like most “educated” modern people, that this meant the ancients were ignorant. Now I think it means they were more poetic and metaphorical than us, certainly, but also more keen observers of the human condition.

For demonic possession exists, and it does occur through highly palatable ideas and images. It sets us on a path of bad decision-making which amplifies the original mistake until it occludes any chance of our returning to normalcy. Like zombies, we become creatures of our condition.

I don’t know if it has a supernatural origin. It might. What I do know is that people, by making moral choices of dubious value, set themselves on a path to demonic possession. Once there, they find the path only deepens and further separates themselves from all good things.

The archetype of demonic possession is Satan. Once an angel more beautiful than all the rest, he decided he wanted power more than unity with the order of God and the universe. Thus he fell from heaven, and was given power, but in a degraded and horrific world known as Hell.

In the same way, through Greek and Pagan mythology, those who commit the sin of hubris and place their own desires, judgments and feelings before the knowledge of the gods are often cast into eternal punishment. Sisyphus and Prometheus come to mind.

Each of these cases shows a human individual deciding that their own need for control over their life is more important than reality itself. Gods are a subset of reality, since whether metaphor or not, they are used to describe real events and the order of existence itself.

Thus we come to the modern time. The order of democracy is based in equality, which causes us to require pluralism, or the simultaneous validity of just about every viewpoint. If we are all equal, all of our ideas must be accepted as true — or inequality will be created.

Unfortunately for us pluralism has a single huge flaw: the universe itself is not pluralistic. Events occur A->B style, but what matters is that ultimately B is reached, not infinite variations on what B might be. Choices are made and outcomes occur.

Pluralism requires us to stay in a state of perpetual non-consequence. The instant we start paying attention to consequence, all opinions are no longer simultaneously valid. We must stay in A and never get to B.

However, this creates neurosis as the founding value of our time. We split off from reality itself, and make our reality instead the world of thoughts, words, and the impressions of others. By forcing our own realities to be as real as reality, we create a duality.

In this duality, all human forms of reality are real. And so is reality itself, sort of. Because the primary rule is pluralism, or that all realities must be equally valid, reality is only acceptable insofar as it does not contradict our individual realities.

This creates a neurotic condition where we see truth, but can’t accept it, because it is socially taboo. This is turn creates a vast separation between the individual and society, whereby the individual distrusts society because society forces its non-reality on them.

For the individual, this situation is problematic when problem-solving is called into play. The dogma of society says we’re all equal but clearly some people are insane. How to work around that? Or how to admit one wants to live with people like oneself? Or wants to be straight?

Dishonesty is the consequence of duality. We say one thing in public, and in fact make public demonstrations of our obedience to the dominant paradigm, but then we do another in private. Whether that’s fetishes, drugs, moving away from the ghetto or just disliking other equals.

Once this change comes about, honesty and realism are the ultimate taboo. People prefer liars, as if other people are lying, it’s easy to speak one’s own lies without consequence. Truth is an offense, and a threat, and socially offensive.

In turn, this makes life torment for the intelligent person. To get through the day, we must demonstrate submission to human stupidity by affirming any number of ridiculous lies. The more ridiculous, the better. If we do not, we are excluded and live in poverty.

This system of control is more pervasive and effective than anything the Nazis or Soviets dreamed up. Liberal democracy is a better method of totalitarian control.

All of this makes me think our ancestors knew what they were on about when they talked about demons. A person possessed with a desire to dilute, abrade, spin, corrupt and obliterate truth and reality is a person owned by a demon. They act demonic in their fanaticism.

Demonic thought pervades a society that is hell-bent on crushing innocence, joy, truth, beauty and purity. It is obsessed, fundamentalist in its radicalism, and driven as if by a supernatural force with a will to destroy. It is an urge toward death.

While the actual explanation of human psychology seems to fit better, “demonology” might work as well. Pluralism is a demonic mind-virus that infests people and causes them to deny reality, and hate anyone who refuses to do the same. Let’s have an exorcism and restore truth instead.

Why are people so determined to remain asleep? | Is national identity necessary for empathy?