Black Lives Matter Admits Its Actual Agenda: Give Us Your Stuff 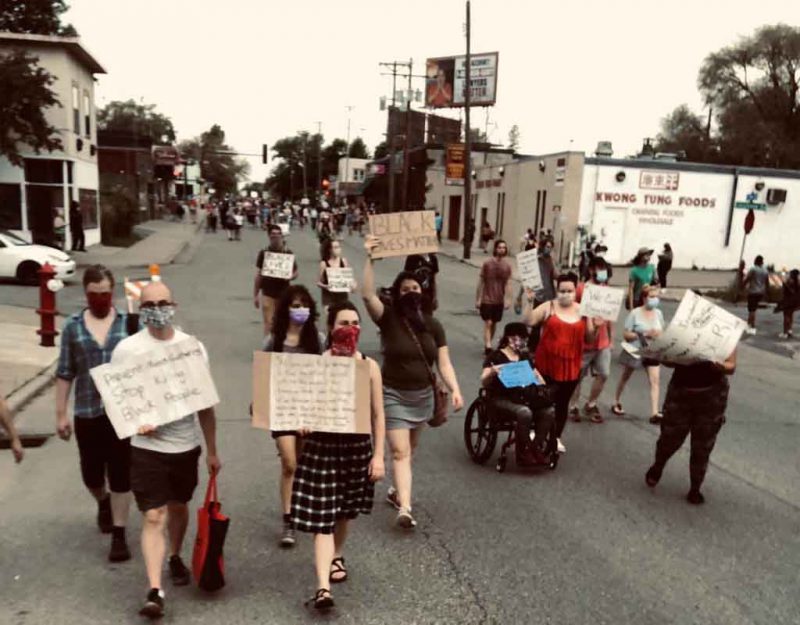 To review: Leftism is a form of Crowdism, or what happens when an organization succeeds and social factors take over from realistic concerns, at which point the group panders to the System and the need of each individual to be free from attack by the others.

That tendency causes inversion where the group censors difficult aspects of reality and comes to a false consensus based on the remanining concepts, which always emphasize ideas of tolerance, compassion, altruism, and acceptance because these make the group happy.

Individuals game this system by preaching altruism in order to suppress the self-interest of others while concealing their own, allowing the individuals who seem to be making the rules to cheat on those rules to get ahead while camouflaged by altruism.

This means that appearance rules over reality, and the group separates into a sub-group that knows the rules are bunk and a larger group of “useful idiots” who believe the dogma. The latter group includes all misfits, marginalized, outsiders, and those who have not succeeded.

In this way, everything that humans do which is good becomes taken over by social concerns and turned into the same old thing, destroying its unique qualities and reducing its overall quality while making it a weapon against the public interest.

Black Lives Matter proves to be the same, since it revealed its motivation as wealth transfer through theft in the name of altruism regarding policing and race:

A group of Black Lives Matter protesters in Seattle marched through a residential neighborhood this week demanding that white residents give up their homes, dramatic video shows.

Footage of the Wednesday demonstration posted to Twitter shows a crowd of dozens chanting “Black lives matter” before an unidentified man projects his ire toward nearby white residents — saying they are living in a historically black section of the city as another woman in the crowd yells that they should “give up” their homes, the clip shows.

“Do you know that before your white ass came here, this was all black people?” the man says. “Do you know people like you came in here and basically bought all the land from the black people for less than what it was worth, kicked them out so you could live here? Do you know that?”

Ironically, the Black Lives Matter protesters have a legitimate gripe, which is that “gentrification” — the replacement of ghettos in a good location with higher-priced housing — is erasing their traditionally Black communities:

Another woman in the crowd then urges the residents to “open their wallet” as the man continues to yell at the unidentified residents off-camera.

“So how do you plan to fix it?” the man continues. “As a gentrifier, because you are part of that problem.”

A woman with a megaphone then urges the residents to “give up” their house, the footage shows.

However, their response — demanding the wealth transfer typical of all Leftist concerns — does not address the underlying issue, which is that diversity means conflict between ethnic groups. They are likely to get their wish for other reasons.

The average home price in the U.S. in May rose 4.2% compared to a year ago. The data shows that prices for cheaper homes — those found in the lower third of prices in metropolitan areas and a typical target for first-time buyers — grew faster than the rest of the market, rising 6.7% from a year ago.

The pandemic pushed the U.S. economy into a deep recession as many businesses shut down, which in turn forced the hand of the Federal Reserve to dramatically lower interest rates. The average mortgage rate fell from around 3.75% at the beginning of the year to under 3% in a matter of weeks after the pandemic struck the U.S.

In other words, we are seeing reverse gentrification because of the high prices of the cities and people are using that as a chance for “white flight,” or moving to the outer suburbs to cheaper areas where they can afford more house.

In diversity paradise dystopia Houston, for example, buyers are opting for exodus to the whiter outer suburbs over the more expensive, more diverse inner city areas:

While housing availability can vary widely among neighborhoods and price ranges, supply was limited throughout the Houston suburbs. From League City and Missouri City to parts of Conroe and Katy, dozens of areas had fewer than three months of inventory.

Some high-end neighborhoods closer to downtown, however, saw their inventories rise. River Oaks, Bellaire, the Galleria area and Westchase all had more than 10 months of supply.

Some of this seems to be a response to overpopulation and urbanization, which have rendered many city neighborhoods into polluted, loud, over-lit, high-crime areas where the supposed benefits of diversity have not compensated for the social decay and concrete jungle:

Last month, Linda Baker recalled, she saw a roadrunner cross the street. She still remembers breathing a sigh of relief when they made the move.

“It’s like you’re exhaling when you get out of Houston,” she said. “Because there’s green pastures and green fields.”

Thus humanity repeats its pattern: good people make nice things, then everyone else shows up and demands that those things cater to them despite being unable to provide them for themselves, and then the good people move on to somewhere else.

This creates a formula for a planet covered in ghettos with new land constantly being exploited to make suburbs for the productive people fleeing the unproductive, resentful, and larcenous masses.

Why American Toilets Are Terrible | Atlantis