Robert Frost (1874-1968) who wrote the poem “The Road not Taken” which shows us a metaphor for the link between brain function and this intuitive realization:

Two roads diverged in a wood, and I,
I took the one less traveled by,
And that has made all the difference.

Human consciousness has begun to realize that the path you follow determines the way your brain works. Perhaps the brain can re-configure itself to work differently and that surroundings affect this. If one follows what everyone else does, the brain works less and brain signals follow same routes repeatedly, but if the brain is exposed to new surroundings by not following everyone else, brain signals create new routes and result in new answers.

There is a multitude of intellectual information pointing to this, but one 2018 study/opinion investigated the partisan political  implication:

Democracies assume accurate knowledge by the populace, but the human attraction to fake and untrustworthy news poses a serious problem for healthy democratic functioning. We articulate why and how identification with political parties–known as partisanship–can bias information processing in the human brain.

There is extensive evidence that people engage in motivated political reasoning, but recent research suggests that partisanship can even alter memory, implicit evaluation, and even perceptual judgments.

Added to the political partisanship one may also appreciate the academic partisan effect visible in the table below: 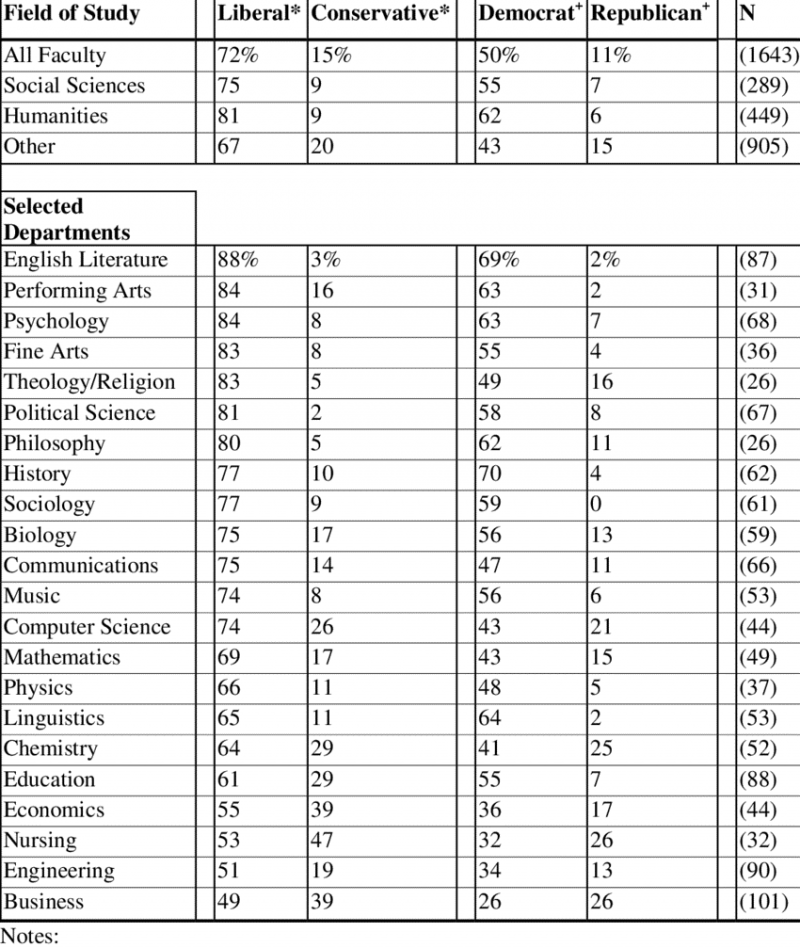 History professors, for example, are 70% Democrat and only 4% Republican. Clearly there is substance to the idea that ideology “swims” left despite repeated warnings that people on the heavily traveled, stamped out road will miss small truths like this: 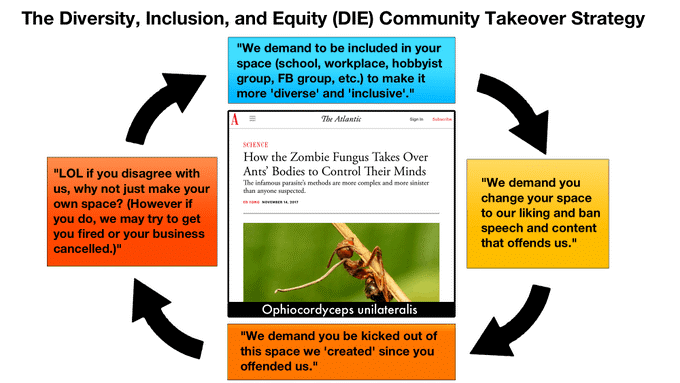 The Anglosphere is rotting from the outside in because ever since the Magna Carta Libertatum, it has regarded inequality as a bug, not a feature. Not even the mighty Darwin could stay the rot.

That not even evolution could stop ideological brain contamination is now an immutable truth, something mankind did not realize during the fall of previous civilizations.

In real terms the unintended shock delivered to the human brain by COVID-19 lockdown is becoming apparent because it is also a road less traveled.

Despite abnormal lockdowns being pushed by popular liberal roadies such as Governor Newsome, his brain may be slower to adjust, but it should be adjusting no less. Despite Californian lockdowns, his having dinner at a restaurant while his subjects are locked down could only have forced him into realizing that he himself is actually in lockdown too, that his own house is now a prison and that he literally has to wear a mask in his own chauffeured car. Despite his brain suffering cognitive dissonance to the dysfunction causing thousands of Californians fleeing toward Texas, the new surroundings his brain is exposed to, must eventually, albeit slower than most, affect signaling routes in his brain. Whether that will be enough to stop the rot however, is doubtful.

These new surroundings caused by lockdowns are slowly creeping up on us all, and those who are used to taking the road less traveled will be accommodating the new brain circuitry requirements first. While civilizational decline started a long time ago, the visibly new surroundings started much later. One opinion is that it started when Trump got elected in 2016. His followers, but more specifically the serious, more civilizational, societal and organizational pundits realized that this requires a new mindset because he was viewed as a guy who had energy while his opponent Hillary Clinton was literally falling over her feet and down stairs and had to be held upright as if she was in a drunken stupor.

The importance of having personal energy is not new of course and it is another small issue missed by most travelers on stamped out, flat and easy roads without those pesky obstacles only non-vibrant peasants (like Trump) are forced to overcome.

But having more energy on a personal level is not enough, because if it is not expanded to an organizational level, the individual will still fail, as can be seen with Trump now one of the few US Presidents that failed to get re-elected.

A small and slow realization of how organizational mindsets should change since 2016 was Nihilism as a Management theory. However, despite this small truth, most people are blinded by the seductively well illuminated road paved with such good intentions.

Nihilism suggests that “unpopular risks” be compartmentalized and addressed as risks to the organization itself, while “popular risks” — the “fake news” variety — should be considered as possibly raising or lowering the public value of the organization, but generally not threatening its destruction.

The lockdown strategy employed by governments world wide have also affected economies and life expectancies negatively, but missed by most, it had a detrimental effect on human psychology.

Our results suggest a progressively detrimental impact of lockdown on various aspects of psychological health. We noticed around eight to ten fold increase in the prevalence of depression (30.5%) and anxiety (22.4%) during lockdown, as compared to baseline statistics in Indian population (3·1–3·6% for depressive disorders and 3·0–3·5% for anxiety disorders).

Loneliness, as pretty much all of us feel, is controlled by the brain. Although loneliness is considered a negative feeling, science shows that it is actually something we need in order to overcome a situation that may put us at a disadvantage. Just like feeling physical pain, this is the way your body tells you there is something wrong. So, loneliness cannot kill us per se, but if it is not mitigated, it might trigger anxiety, stress, and depression, which are known to drive people to unfortunate outcomes.

The next time you feel lonely, think about your dorsal raphe nucleus. The neurons there are just trying to help you out; listen to them. Find your social interactions and give those neurons a break.

Listening to one’s dorsal raphe neurons will help whether you are an introvert or an extrovert. It helps to start off by reminding oneself of the individual mindset, the organizational mindset and the energy required to overcome obstacles in the road less travelled. For example, eat better, exercise, care for family and domesticated animals as well as focusing on the risks your organizations (home, job, community) faces. If you must develop a new habit, think of it as a creative exercise you may as well enjoy using various experiments towards finding good solutions.

Once this is in process, one will likely find that pride of these little achievements becomes evident adding to the enjoyment of each little success. It will cause people to proudly stand up straight again, facing the organized chaos head on at their own decentralized level.

The next emotion one is likely to experience is that of humor. In the process of experimentation, some mistakes may be made that is funny, or some human responses may be elicited that may be funny. And it may even lead to dancing and preparing a good meal that will result in a good night’s sleep.

By focusing on these things, one becomes less dependent what others do, or don’t do. Basically, it sets one free to harvest all those other small things that aid one’s decision making towards keeping oneself on the road less traveled.