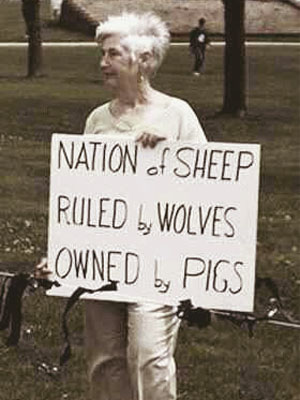 The little guy never had a chance in this world.

He is hopelessly manipulated by a media owned by criminal elites, pushed around by government with its paramilitary police, and his fortunes wax and wane at the whim of the sociopathic banksters who control Wall Street and the value of our currency.

In Europe, the billionaires meet and plan the future of international finance. The little guy is just a pawn in this game, a profit counter to be tossed around and discarded. He will work his whole life for an amount equivalent to what they spend on pool care in a month.

When he wants to find out the truth, the news-entertainment media lies to him. It is owned by six large corporations whose boards of directors and ruling families are incestuously intertwined. Its highest positions are a matter of nepotism.

If he resists, he will be drummed out of his job for being a conspiracy nut or having unpopular opinions. Then government can haul out a book of ten thousand laws and search until they find one he’s violating. Then he gets to see the inside of a jail, and perpetual debt to his legal defense.

The little guy is systematically crushed so that big corporate and government interests can get richer and more powerful. When they can, they manipulate him, and if that doesn’t work, they force him into position with threats of financial armageddon, arrest or isolation.

There is no hope of beating such a complex and powerful system. If all the little guys joined together, and formed a big enough group, maybe they could overthrow it. But that will never happen since the little guys are hypnotized by media, government and corporate narratives that deny the need for revolution.

Did you get all that? It’s unmitigated horse droppings, by the way. Not a word of it is true, although it “feels” true. It “seems” to be a plausible explanation for how things work, if you’re in the habit of coming to a conclusion first and then searching for an explanation or justification later that fits into the narrative.

Let us be more critical in our thinking: at no time in history has the individual had as much power as he does now. He has the vote, the ability to form political groups, the use of petitions, and the freedom of expression to convince others to see it his way.

The individual in fact is king in this society. It is structured around individualism and self-expression. It is designed to stop the presses if a single person is wronged, and to allow that person powerful means of redress. The media actively seeks stories of individuals wounded by the system and represents them. With financial flexibility, the individual has the greatest chance of gaining power of any time in history.

Vast legal and administrative systems exist which cater to the individual’s needs. These systems will represent the individual against government, industry and society at large. Society itself is geared toward defense of the individual and her pursuits against the impersonal and machinelike modern bureaucracy.

An interesting relationship exists between the three groups: the sheep who are ruled, the wolves who command, and the pigs who own the means of production.

If this were not a realist blog, and we liked to live in the world of simple emotional “truths” that allow ideas like Marxism to seem appealing, we would automatically blame the wolves or the pigs. But a more analytical approach reveals how the three groups depend on each other.

The sheep, as seen above, cannot make decisions on their own. They are pulling in too many directions at once. At the same time, the wolves can make decisions, but need popular support or they are viewed as tyrants by the sheep, who will then revolt and destroy them. The pigs need the protection of the wolves in order to fleece the sheep, but also need the sheep to become prosperous so there is something to fleece. These three groups are dependent on each other.

Because this three-way cluster is so comfortable, it has invented a mythology that is emotionally appealing but factual nonsense. In this mythology, the sheep are victims who have no power; this lets them off the hook for being actually responsible for what goes on in their democracies. The wolves get to play the dual role of being in charge, and being beholden to sheep and pigs. That lets them off the hook for ever achieving anything notable. Finally, the pigs get what they really need, which is a society that will not change its underlying financial structure, while gaining a cover story that excuses the worst of their abuses; after all, they’re the bad guys.

Don’t the sheep stop to wonder about this comfortable narrative? Hollywood movies tell us that corporations run the country and that the sheep need to fight back against them and government, and portray the pigs as evil corruptors. Yet Hollywood are of the pigs themselves. Surely they would not say something that wasn’t in their self-interest, would they? The mythology lets them off the hook as surely as it does the sheep and wolves.

The wolves of course could stop this process, but they encourage it. Each rebellion against a select wolf, but not the domination of wolves themselves, strengthens the wolves as a group. They remove the lone offender and use that wolf as a scapegoat for all systemic failings of their government and society. They’re off the hook too.

Among the sheep, it is considered bold and brave to “speak truth to power” by reciting what is basically Marxist and liberal propaganda about how the people are oppressed by government and industry, and need to rise up against the same. And yet revolutions of that nature are what created our current society. The sheep are letting themselves off the hook by picking a solution that is not a re-making of the system itself, but an affirmation of that system as a concept by removing one of its instances, just like they might remove a “rogue” wolf or pig but not remove wolfdom and pigdom.

Centuries ago conservatives saw this coming. They realized that government in the hands of the sheep was untenable, and as a result, the wolves and pigs would take over like the mechanical little profit centers they are. They realized the sheep would invent a victim story, like a girl who got drunk and said “yes” and cried rape the next day, which would allow all three groups to co-exist as buddies in a profit scheme.

There are no revolutions that can un-do this order and none are needed. What threatens it is the idea that we will select values higher than the individual, and thus liberate the sheep from their disorganization, which will force the wolves and pigs — who depend on the sheep — into acting in a way that pleases the sheep. This way will be a new way, since it will no longer be based on a victim story, but on a process of asserting values despite the inconvenience of doing so.

Sheep, wolves and pigs. We fall into these simple roles when we have lost sight of a larger goal. When that happens, our society begins to fall apart, and we invent excuses so that we can let it happen without troubling our individualistic pursuits.

The hunted | A normal life