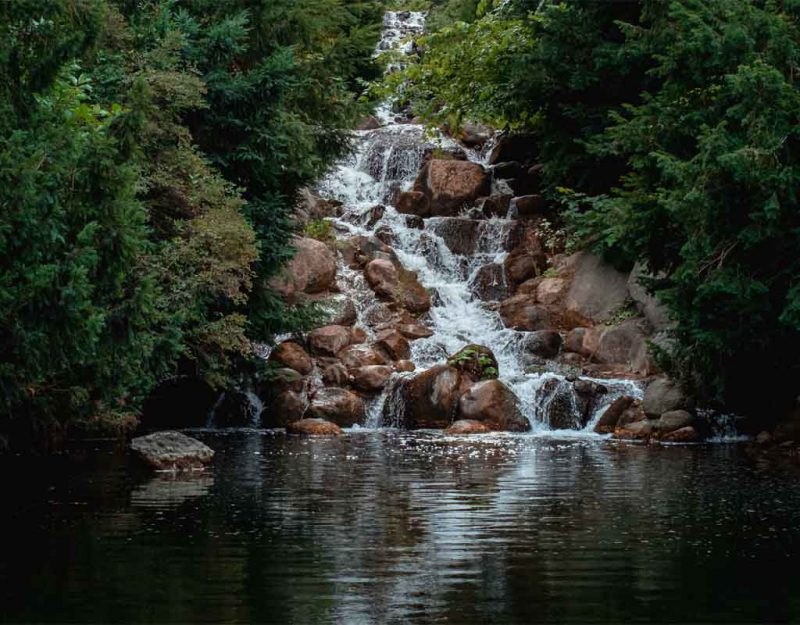 Invasive species always win. Since they are not adapted to their new home, they spend no time, energy, or mental concern on being specialized, and simply do what is easiest. This means that while they are not efficient, they are effective.

If you take a handful of rats and pitch them on some random deserted island, they will quickly eat everything because they are not specialized for what is there. Plants, bugs, lizards, bird eggs, and even droppings from other creatures will go into the insatiable rat maw.

Not only that, but the rats will sense that they are a creature out of place, so they will breed wildly, frequently, and profligately, flooding the island with lots of little rats. These will eat the food sources into scarcity, then eat each other.

The end result will be a whole lot of rats and a dwindling number of plants. Other species will die out, diminish in number, or retreat to hard-to-find niches like the tips of mountains. Unless the rats reach a balance, they will eat up the rest of their food supply and die out in turn.

They can get lucky and have some things that form a balance. A nearby island may have predators who discover that, in addition to fish, they like rat; this will keep the rats from ecocide-suiciding. A new disease might wipe out enough of the rats that their population stays in check.

If nothing stops them, the rats will kill the goose that laid golden eggs by destroying the ecosystem that provides their food source.

Those birds carry pollen for local plants that produce seeds, the droppings fertilize the soil so new plants can grow, the bugs die and provide nitrogen for the soil, and the lizards eat enough bugs to keep those from slaughtering plant and animal life.

This architectonic system holds each population in balance, giving it a niche where it gives and takes in such a way that the ecosystem remains strong, providing it what it needs and through natural selection, ensuring that it does not become overwhelmed by mutations and defects.

When the rats show up, they have a first mover advantage over the ecosystem, which never saw them coming. They bring new behaviors, and because they are not specialized, they have lower costs than specialized species, which do things like eat only a few plants or reproduce in only a few areas. Specialization is what allows them to have a niche and exist in balance and harmony with the rest of the ecosystem.

Now imagine the disaster scenario: the rats have both a fast boat and penicillin. They land on a new island, eat everything in sight, breed quickly, and then look at each other, shrug, and move on to a new place. No disease can stop them, and they can work around starvation by moving on.

These techno-rats will leave behind a string of dead islands, where the ecosystem is smashed and any life that exists is barely hanging on. This does not bother the rats, because they are still doing just fine. Nothing will stop their population from booming. They are conquerors by default.

Technology insulates these rats from the normal consequences of a population bloom which is suicide by ecocide. Their ability to go ruin a new place saves them from their own instability and self-destructiveness. To the ecosystem, the rats resemble a cancer.

Invasive species always perform this role because they have traded an expensive thing, having a “culture” which adapts them to a certain niche, for a simple thing, which is eating and reproducing wantonly.

Immigration acts like an invasive species because the immigrants have no need to uphold the culture and civilization in which they find themselves. They simply come to take advantage of what others have built.

This means that instead of spending time, energy, and money on sustaining culture, they simply show up to work, take the paycheck, take any free services offered, and treat the place like a hotel or apartment building.

They cannot “assimilate” because doing so requires that they reject their origins and accept being of a non-culture, either falsely adopting the culture of another group or rejecting culture entirely and being simply consumer-citizen-customers of their new government.

Leftists love immigration because their goal is equality of the individual, which requires tearing down any orders larger than the individual like culture, hierarchy, customs, faith, heritage, and family. They want the individual to rule over civilization.

Leftism also resembles an invasive species because, by throwing aside the need to maintain and develop what exists, the Left becomes more effective. They are laser-focused not on maintaining a society but taking it over, and in doing so, they have a lower cost burden than those who maintain.

We are on the cusp of real change in the West. Since The Enlightenment,™ we have acted in order to make the individual more powerful than the order around him. The right answer always involved more equality, more defense against society and its standards, and more “me first” empowered living.

With the downfall of globalism and liberal democracy, which created each other and are going down together, we see a new focus on ecosystem. That is, we see civilization as a thing with rights, including the rights of history and the yet unborn, much as we are starting to see nature as a thing with rights who needs to be an equal participant in our political and social process.

This new ecosystemic view of which populism is a vanguard will look toward things larger than the individual and maintain them in order to provide opportunity to the individual, including the ability for the acts of the individual to persist beyond his lifetime.

For centuries, we have lived in the midst of a mental disease which forced us to do the illogical in order to maintain our pretense of individualism. This, too, acted as an invasive species, and it has eaten up much of the civilization that once made us great.