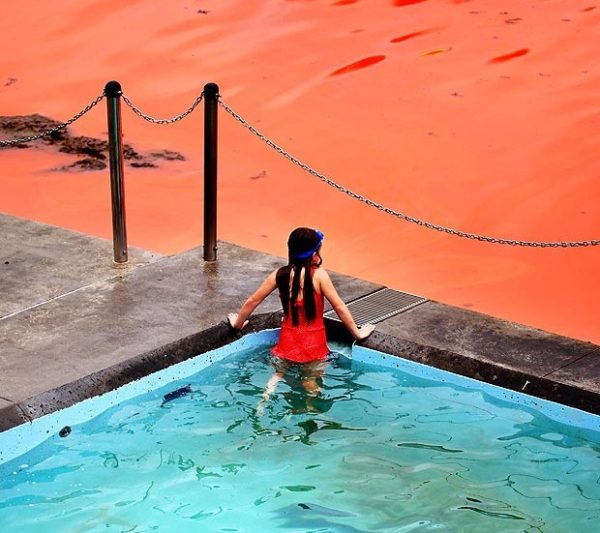 Life is mathematical. Every organism faces a series of challenges which are defined more by numerical factors than anything else. For example, how much food is there? How many offspring must be produced? All of these calculations determine outcome more than doing one specific task so well that it overcomes the numeric limitations imposed upon it.

The mathematics of life determine survival. A parasitic disease, like a flu, that takes too many resources will kill the host and be less successful as quarantine kicks in; a rapidly-reproducing organism, like yeast, is most likely to reproduce too fast, consume all of its nutrition and die in a bloom of excess.

We see these events happen in nature all of the time. The dreaded “red tide” is one type of population bloom that occurs through algae which reproduce too much and then deprive the water of oxygen, killing off all sea life in the area. If not whacked back, crabgrass takes over lawns and chokes out every other species.

These extreme examples conceal the fact that these mathematical limits apply to every species. If there are too many deer, they will destroy enough trees that next season, they will starve. Too many squirrels means starving squirrels. But the same is even true of human attempts to form groups; if the group cannot limit its natural impulses, it implodes.

Let us look at an entertaining episode where human impulse control failures coordinated with natural over-population and created an ecocidal disaster that destroyed the overgrown species as well:

In August 1944, the Coast Guard released 29 reindeer on the island as a backup food source for the men. Barged over from Nunivak Island, the animals landed in an ungulate paradise: lichen mats four inches thick carpeted areas of the island, and the men of the Coast Guard station were the reindeerâ€™s only potential predators.

…[thirteen years later the] herd was then at a staggering density of 47 reindeer per square mile. Klein noted the animalsâ€™ body size decreased since his last visit, as had the ratio of yearling reindeer to adults. All signs pointed to a crash ahead.

…in summer of 1966, he, another biologist and a botanist found the island covered with skeletons; they counted only 42 live reindeer, no fawns, 41 females and one male with abnormal antlers that probably wasnâ€™t able to reproduce. During a few months, the reindeer population of St. Matthew had dropped by 99 percent.

Let us look at the mathematics of the situation:

St. Matthew then had the classic ingredients for a population explosionâ€”a group of healthy large herbivores with a limited food supply and no creature above them in the food chain.

In other words, there is a mathematical threshold here imposed by the ratio of animals to resources given the need for the resources to replenish themselves. With few enough animals, the food source is able to renew itself; with too many, a situation like “eating the seed corn” occurs and there is no crop in the following year.

These thresholds are invisible because they are not formed of anything tangible or evident, only a prediction based on the mathematics of the situation. For this reason, human groups routinely stumble over these and self-destruct through a process known as a death spiral.

In a death spiral, a human group engages in a pathology based on what has worked in the past. They do this because of social factors, which ties into the same type of neurosis that causes “cargo cults” among human groups:

Cargo cult, any of the religious movements chiefly, but not solely, in Melanesia that exhibit belief in the imminence of a new age of blessing, to be initiated by the arrival of a special â€œcargoâ€ of goods from supernatural sourcesâ€”based on the observation by local residents of the delivery of supplies to colonial officials.

In these, people confuse what they were doing at the moment an event occurred with the cause of that event. This leads to groups engaging in religious rituals to bring back the cargo, even though the delivery of the cargo was initiated by events entirely unremoved from the group. This provides a good metaphor for human pathology.

A small village has a few dozen farmers. One of them has an abundant crop. “I didn’t do anything different, except sacrifice this fish to the god Ba-El,” he says. The other farmers face a difficult choice: if they fail to sacrifice a fish to Ba-El, and they do not have a good crop, they will appear incompetent to others. Whereas if they do, they are merely out one fish.

The economics of pathology unfold from this moment. The symbolic task does not represent a risk in itself directly, but will cause a “sin of omission” where those busy with the symbolic will miss actual problems. But the social cost of not doing the symbolic task could be much higher, especially if something goes wrong and then no one wants to aid the guy who did not conform.

As a result, economics dictate that people follow the socially acceptable path even though it requires the adoption of what is essentially a lie, which is the idea that the fish sacrifice made the abundant crop. The lie unites the social group. Through this method, the human group starts its equivalent of a yeast bloom or red tide, which is a virtue signaling death spiral.

In a death spiral of this type, appearance is more important than reality and simultaneously, is detached from reality much like the symbolic fish sacrifice mentioned above. This means to social success, and success in terms of realistic results, rapidly become opposites. Symbols and their referents even more widely diverge. And so, the civilization becomes dedicated to lying.

For example, the fish sacrifices may have never worked, but those farmers who were conscientious enough to plough, plant and irrigate correctly are also those prone to make fish sacrifices. And so, it appears that the talisman works; everyone does it and those who do not are not trusted, cannot get loans or sell their product, and are marginalized.

The result is that to be a successful farmer, one must make the fish sacrifice, because social factors mediate reality through the actions of other people needed by farmers. At this point, something fascinating happens.

Clearly the fish sacrifices are not working. Normally, we would conclude that the method either never worked, only partially worked or has stopped working, and place less emphasis on it. But because of social factors, we must double down and place more emphasis on it.

Through this runaway acceleration feedback loop, more fish sacrifices will be performed. They may happen daily or require more or bigger fish. Farmers will spend themselves bankrupt buying fish because to do otherwise is to lose social approval, and so to be unable to get help (loans, sales, labor) from others. Insanity replaces sanity.

A virtual signaling death spiral of this sort adds to the natural conditions for a sudden extinction: unlimited growth plus finite resources reaches a threshold, but now, the added wrinkle is that resources are being expended for symbolic and not realistic ends. This does not cause sudden failure, which is why it is deadly.

Instead, it causes a gradual slowdown. For every dollar made from a farm, ten cents go to fish. This cost is passed on to consumers, who now pass it on to others. Lawyers, teachers, and repairmen all charge ten percent more. This in turn raises costs to farmers, so they raise their costs in turn. This feedback loop continues until the economy is near collapse.

Human groups of all types fail through this process. Symbolic and social behaviors replace practical ones. Then, the group both divides itself internally over the issue of symbolic behaviors and how to interpret them, and bleeds itself dry pursuing non-issues instead of the obvious and massive actual threats.

We see these patterns time and again in human society:

Future human leaders will be more concerned with feedback loops that produce death cycles than we are now. Failure of organization to respond to changing resource needs, including to slow growth before a crisis, destroys civilizations. Instead of adapting, the dying organization relies on proxies which increase its free rider and tragedy of the commons crises.

Those looking for rules that can prevent this situation will be disappointed. Humans are biological organisms that vary in ability; those with low ability, even in the presence of enlightened rules, will only misinterpret those rules. Without perceptive leaders with the power to act decisively before a crisis, that group will fall into a virtue signaling death spiral and perish.