Why Death Metal And Conservatism Are Similar 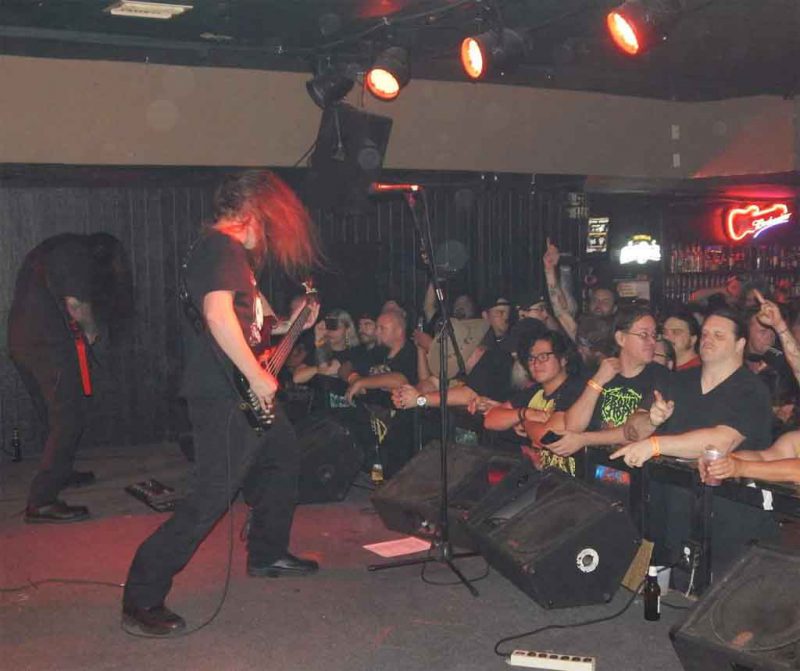 Death metal music confounded academics when it first appeared: a style of music that seemed dedicated to death and disease, yet built itself around an intense sense of structure and narratives emerging through texture formed of the dialogue between phrases of different riffs assembled in a seemingly-random order.

As it turns out, death metal is not only structuralist, but transcendent. By embracing the darkness within life, it finds a wisdom within that darkness that matches the wisdom in light, and so sees a structure of the whole which involves both darkness and light. Through that, its listeners find a beauty in life itself that ordinary self-centered rock music cannot deliver.

Conveniently, academia has begun studying death metal to see how this spawn of heavy metal and hardcore punk can deliver an experience beyond that of normal popular music:

“The ubiquitous stereotype of death metal fans—fans of music that contains violent themes and explicitly violent lyrics—[is] that they are angry people with violent tendencies,” Thompson says. “What we are finding is that they are not angry people. They’re not enjoying anger when they listen to the music, but they are in fact experiencing a range of positive emotions.”

Those positive emotions, as reported by death metal fans in an online survey that Thompson and his team conducted, include feelings of empowerment, joy, peace and transcendence. So far, almost all of the anger and tension Thompson has documented in his death metal studies has been expressed by non-fans after listening to samples of the music.

He cites a 2006 paper by the late Karen Bettez Halnon, who found that fans of heavy metal (as has certainly been the case with many other genres and sub-genres over the decades) view the music as an alternative to the “impersonal, conformist, superficial and numbing realities of commercialism.”

One can experience “feelings of empowerment, joy, peace and transcendence” through embracing the darkness of life. Much as is the case with conservatism, those who embrace the darkness can see the light within, or in other terms, understand the reasons that the darkness exists and thus see a vision of the world as darkness and light in conflict to achieve an overall good.

This sensation, known as transcendence, appears throughout history among influential thinkers. Looking into the darkness, they see a purpose to it, and through that, understand how both darkness and light are necessary to produce the functioning of the world and through that, its overall goodness.

Those who see this transcendental order to the world experience both a realism that embraces all that is dark, and an understanding of the beauty and wisdom pervading the whole of the universe, which in turn leads them to a positive state. On the other hand, those who look only into the light find that darkness emerges from it because the two are linked.

Leftists pursue the light because they fear the darkness and by doing so make themselves blind to the whole experience. That in turn forces them to be dependent on seeing the light, and filtering the darkness, which prevents them from seeing the world as a whole and leaves them addicted to a worldview that filters out the dark in order to see the light.

Conservatives similarly embrace the darkness. We see that most people are rodents who act selfishly unless forced to do otherwise. We know that because the two forces are eternally in conflict, to keep balance we must always push back on the bad. That erodes the idea of tolerance and its handmaidens pacifism, pluralism, and equality.

Leftists refuse to accept darkness and obsess themselves with the light, allowing them to use the good as a symbol for the whole world which contains both good and bad, and this blinds them to seeing bad. This allows them to make things equal, which gives the advantage to bad, since it has fewer obligations than doing good, which requires effort.

Their focus on the light can only reveal the darkness within it, which then requires them to deny that darkness, making them into boring narcissistic materialists. If you focus only on the good and deny the bad, you are ruled by the bad; if like conservatives and death metal fans, you embrace the darkness, you can see the light within and not go insane.

Conservatives and death metal fans generally seem more at peace with themselves than the rest of the population because they have accepted and overcome the bad, and now just work toward the good, without having to delude themselves using symbols. They can simply perceive reality as it is, and by accepting it, see the wisdom behind its design and appreciate its beauty.

We call that type of insight “transcendentalism” in that one transcends both good and bad to see how bad and good work together to make the meta-good that is existence itself. We see the reason for everything, and no longer feel as if bad things are the world personally attacking us, and this allows us to instead turn our eyes to the possibilities of existence.

This leads to conservatives to an entire world of observations which the Left will never reach, including about the nature of the universe and the significance of life, as well as the possibility of the divine. Without that first transcendental step, they can never look more closely at the more complex pattern-matching they have to do in order to figure out these ideas.

Our view is not so much moral as it is realistic: methods of the bad — death, disease, war, murder, mutation — are more powerful than the good because the good does not exist in finite amounts so much as it is an effect of having a realistic outlook. Embracing the bad and overcoming it means that we can move on to establishing that order which produces good.

Masses of humans will never favor this view. They run in fear from bad symbols, and stampede toward good symbols, destroying anything good in the process while ignoring actual threats. Over time, the human insanity destroys any group, institution, culture, or community that it infests.

For this reason, conservatives and death metal fans alike will always be marginalized. We seek a path forward for humanity where insanity is not the norm, and that makes us a threat, since we would invalidate everything accepted now and replace it with evolution, and this causes them all to quake because they fear they would not stand up to that kind of scrutiny.