The election of Barack Obama has brought us a bit of a shock: instead of being the “post-racial” president, he’s the great divider — and through no fault of his own.

Most people who voted for Barack Obama did so out of a sensible desire to advance their own ethnic group, except whites. Whites voted for the historic moment of the first black president taking office.

As with all other liberals, white liberals have a pity complex. They feel life is bad because it is unequal, and seek to change it, and this attitude soon redefines all of what they see in life: they see broken and equality as the fix.

They feel persecuted by life itself, and so identify with others who are persecuted or passed by, and in the process, come to see how easily they can transfer/project their problems on to external entities like government, the Church, the Rich, etc.

Politically, this is a disaster because it has no shutoff valve because there will never be an end to feelings of negativity until the person has learned to look at the world differently.

It’s no surprise then that the election of Barack Obama did not appease such feelings of pity for self and world, but intensified them, because there is no way a single election can live up to the religious and apocalyptic feelings that made it popular.

On the other side, those who have more at stake are feeling uneasy. They know that liberal revolutions, as in 1789 in France or 1917 in Russia, follow a predictable pattern. Dissidents are removed; the wealthy are killed or exiled; learning is altered for political reasons; bureaucracy takes over from competition; and shortly afterward, the country declines toward third-world status.

These people know they will not feel right until there is a strong conservative presence in the country again, mainly because they distrust the psychology of their opposition. This is why they have such a hard time articulating their beliefs, and fight them through proxies like abortion, birth certificates, health care and Nobel Prizes.

In the view of these people, liberalism is what unites a mob of the disaffected, clueless, lazy, injured, abused and upset, and gives them license to seize the means of production of a state from those who better know how to run that state. The result is bungled statecraft, bungled economy and bungled social policy, ruining the part of the nation that is not regulated on an individual level — its infrastructure and process — in the name of giving individuals equality.

They fear a liberal future because they know how bad liberal states have fared throughout history. They also know how liberalism has a habit of taking thriving places and destroying them. Even more, they know that the audience for liberalism doesn’t care — for them, liberalism is a way of explaining away personal failure and getting revenge on those that life “favored.”

They also know at this point they’re beaten in the demographic game, which is what election 2008 signified.

First, it was attempts to bring in previously-marginalized social classes, including almost white people from Ireland, Spain, Greece, Israel and Italy in the 1800s.

Then, it was an attempt to seize control of the more populous states through anti-federalist centralized power concentration, during the Civil War.

Finally, in the 1960s, the left found its ultimate weapon: race. Bring in non-majority people, or enfranchise existing ones, and they will always vote against the majority.

Conservatives had a chance to oppose this but bungled it, missed the boat, or opted for an easier fight. Now their country has changed and has a huge population that not only will always vote against them, but increasingly demands more federal aid.

So watch what their solution is:

A Whitopia has three things. First, it has posted more 6% population growth since 2000. The second thing is that the majority of that growth â€” upwards of 90% â€” comes from white migrants. The third thing a Whitopia has is an ineffable social charm â€” a pleasant look and feel.

The major draw to Whitopia is that they’re safe communities with good public schools and beautiful natural resources. Those qualities are subconsciously inseparable from race in many Americans’ minds.

A lot of the members of the church took pains to explain to me the difference between white supremacy and white separatism. They said, “We don’t think we’re better than you, we just want to be separate from you.”

People in Whitopia would say, “Hey Rich, birds of a feather flock together. What’s the big deal?” Our government and businesses across the country make decisions every day that perpetuate segregation. When you say homes need to be built on a one-acre lot, when you say apartment renters can’t live in your community â€” these concrete policies are what contribute to segregation.

He stumbles through a number of logical fallacies here, but the basic gist is clear: white people are leaving the cities and setting up independent communities where they make rules to separate themselves from the masses.

The masses, like most democrats, work at entry-level or slightly above that, and don’t have the money or inclination to join these communities. Money is one filter; the lack of things city people like to do is another.

Why would a population abandon its own country? Well, I have a feeling you’re going to find that many of these people also have offshore accounts. Their view is that our country is no different from any other, and things that brought about decline throughout history — liberalism, corruption, importing a diverse population, random foreign wars — mean we’re heading downhill here, too.

So they’re retreating to wait it out and keep their money away from the taxman as best they can. They know it’s just going to be wasted on domestic entitlements, which now dwarf even our military spending.

They also want the world to see more stories like this:

The U.S. economy may be creeping toward recovery after the worst slowdown since the Great Depression, but many states see no end in sight to their diving tax revenues.

Tax revenues used to pay teachers and fuel police cars continue to trail even the most pessimistic expectations, despite the cash from the economic stimulus plan pouring into state coffers.

These states are following the policy of the nu-America: try to provide lots of social services as a way of keeping the captive population of drones happy.

The result is that when the economy hiccups, they realize they can’t sustain this type of spending — and in fact that much of their spending is debt spending. 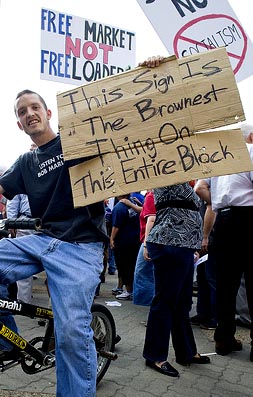 White culture — whether from northern, western, southern or eastern Europe — values self-reliance and investing in tomorrow instead of today. Like Jewish culture and North Asian culture, to name two other high-performing groups, it’s all about finding ways to be more productive.

The drones in the city don’t have such a motivation. They are used to following instructions and hating the instruction giver. They do not care about the consequences of their actions. Like kamikazes, they are more concerned it hurt their Oppressor than that they themselves survive.

So if you find people talking about white secession, or the new segregation, this is what’s happening. It’s unfortunate that people could not listen to conservatives like H.L. Mencken who pointed out that diversifying our culture led to less agreement rather than more and therefore, required more government and corporate intervention, but realistic views have never been popular. Telling everyone they can be whatever they think they are however remains popular.

It will be interesting to watch the USA at it attempts to deal with this latest trend — a migration from cities to isolation.

We’re unfiltered | A house of cards and your place within