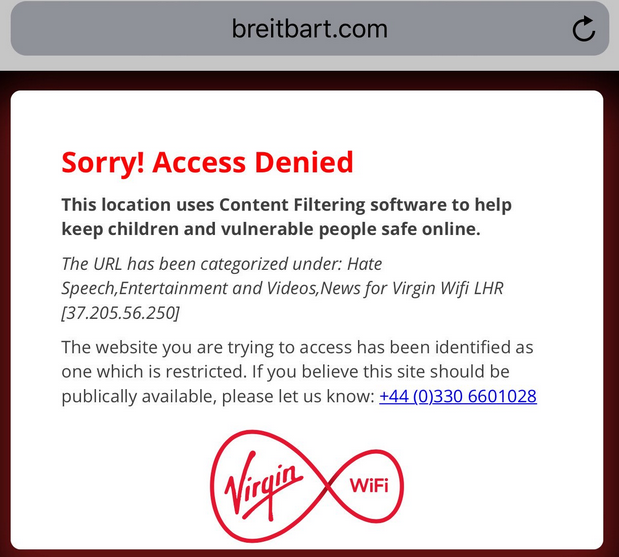 Following a long Leftist tradition of categorizing their opponents as so unsociable that they must be ostracized, Virgin Media — a wireless provider in the UK — has begun denying access to Breitbart as a “hate” site. Similar to how Twitter and Facebook remove “fake news” and “hate speech,” Virgin is shaping the dialogue with censorship.

This happens during a lengthy debate over net neutrality in the US, despite net neutrality still allowing any firm to block sites it saw as hateful even for mild conservative content as one finds on Breitbart. No one has proposed universal free speech on the internet, so private providers can block things they find objectionable like pornography, political speech, and bullying.

In this way, the Left reveals its endgame: they do not strive just to win the next election, but to ensure that conservatives never win again. To them, we are odious because we are not egalitarians, and movements like Brexit, populism, and traditional values concern them because it means the Left is losing control.

Egalitarianism provides an ideology that is fanatical because it is both method and goal. This closed-circuit feedback loop means that egalitarians crusade for more egalitarianism forever, always getting more extreme in their demands, which naturally leads to a need for Stalin/Jacobin-style total control.

The Right, as those who refuse to be controlled, will not go along with that procedure, and so the Left wishes to remove them. Whether by categorizing them as “hate,” forcing them into mental health treatment, replacing them demographically with diversity, or outright jailing and executing conservatives, the Left intends to win.

As Usual, The Media Are Clueless About Trump | Twitter Continues Mass Censorship Under Guise Of Removing Automated Accounts