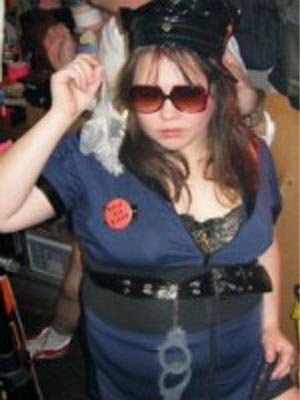 Why isn’t this woman in jail?

She leaked personal identifying information (including a signature) from a customer at the bar where she worked, made a false accusation and then backed out by claiming she wasn’t culpable because she was “blinded by rage.”

In other words, she’s a sociopath. She does not care about the consequences of her actions.

We still don’t know whether the reason she got a nasty note and no tip was (a) because the patron was a “douche” or (b) because Liss was a self-centered, vindictive, nasty, mean and bigoted sociopath, as we now come to suspect has always been the case.

One newspaper did a little more digging and found out that her behavior truly is mentally unstable:

Well, turns out that this isn’t the first time that Ms. Liss has had experience accusing the wrong person of something awful.

In September 2007, Matthew Oly and Bryan Krieger were arrested and charged with felony harassment after Liss and a friend of hers, Marcus Wilson, identified them as having threatened to kill Wilson.

But six months later it became clear that Liss and co. weren’t actually too sure that they had the right guys. – Seattle Weekly

False accusations get people thrown in jail and lives ruined. They are like guns: point and shoot in the wrong way, and you have made an error that no one can fix.

While most of America was distracted with pity for an actual murderer, Troy Davis, in Seattle an incompetent bartender named Victoria Liss was busy trying to ruin a man’s life.

I don’t support the vindictive, lynch mob, victim mentality side of MRA, but I think in this case, we should use Victoria Liss as a talking point. Why isn’t she in jail?

The point of this article is not to say “run Victoria Liss up the nearest flagpole,” but instead to say that we should remember this case any time an accusation is made.

The next time a bartender accuses a customer of being a douche, stop — and ask these logical questions:

I’m amazed the bar hasn’t been sued yet, but I suspect the case is either pending or has been settled already. The bar is in the wrong here, because their employee leaking this identifying information. That’s a huge no-no.

In the meantime, the Victoria Lisses of this world will continue muddling their way through life, leaving wreckage in their wake.