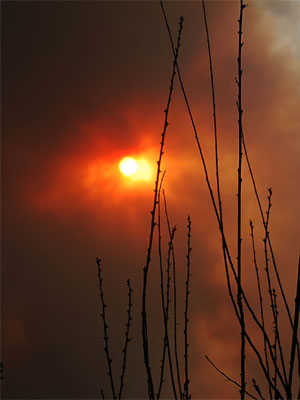 Like ballet dancers on a frozen lake, we often have no idea how sturdy the support under us really is.

In the case of modern society, we rely on thousands if not millions of transactions daily to be consistent. Even more, we rely on the presence of a social order: rules, identity and shared purpose that keeps our society from fracturing along the lines of internal divisions.

As if it were a jumbo jet, our civilization stays in the air because all of its parts work together. When even a small part becomes discoordinated, the whole thing can come crashing down in a ball of fire. Or just end up 500 miles of course, seeking a destination it will never find.

We trust that the parts are held together by enlightened self-interest. Everyone wants to be free; everyone wants to be comfortable; as a result, they act in predictable ways. This is only correct for as long as people believe in the value of what they’re doing.

However, such assumptions create a fragmentation of behavior. Comfort and self-interest become mundane, so people fetishize risk and the outlandish. Even worse, such minimal shared values allow people a blank slate on which to project their neuroses.

As a result, we have a society that (a) on the surface is stable, harmonious and thriving and (b) underneath the surface is bored, perverse and frustrated.

There are periodic hiccups.

Sometimes, it’s a school shooting; other times a murder-homicide, or particularly inventive suicide. The people we think of as strapped in to a system of compulsion and reward may in fact self-destruct.

In the same way the institutions and processes we trust to be consistent are illusions. Police departments are run by human beings who can have bias and err. Scientific studies are commissioned by wealthy backers to find results, and adjusted until they do.

The guy who pumps our gas or makes our food is only as consistent as his own stability. His girlfriend breaks up with him, a life tragedy happens, or he simply gets mad at his job, and he may turn on us.

People we walk among in crowds: what are their stories? Some are sociopaths or other dangers. There is no way to see, since all are anonymously equal. For all we know, these people will lash out at any moment.

Our politicians are rich guys who made enough people like them to get elected.

Employees are barely vetted at most employers. They call a reference, skim the resume, and hope it’s true. The guy helping you try on shoes may be a murderer, or worse.

Most government employees took a test and had agents ask questions of neighbors. No one actually knows them. And yet we rely on them and their private counterparts for an array of services.

Behind the scenes, oligarchs and organized crime divide up the spoils. Government buys votes with benefits programs. Leaders in remote nations pander to their constituents as well, sometimes leading to advanced irrigation and sometimes to holy war.

To seem confident, personally important and interesting, we must walk through this world as if it were stable. Yet it is not. It is inherently unstable and yet is excellent at covering up that instability.

However, to act as if it were stable is to indulge in a waking dream. We want to do it; we want to believe that everything will turn out OK, so we ignore problems and project our emotions onto life itself.

In the back of our minds a contrary thought blooms, no matter how many times we try to suppress it. We do not live among stability; it is an illusion. Again will come the day when we must fight to achieve stability, no matter how afraid we are.