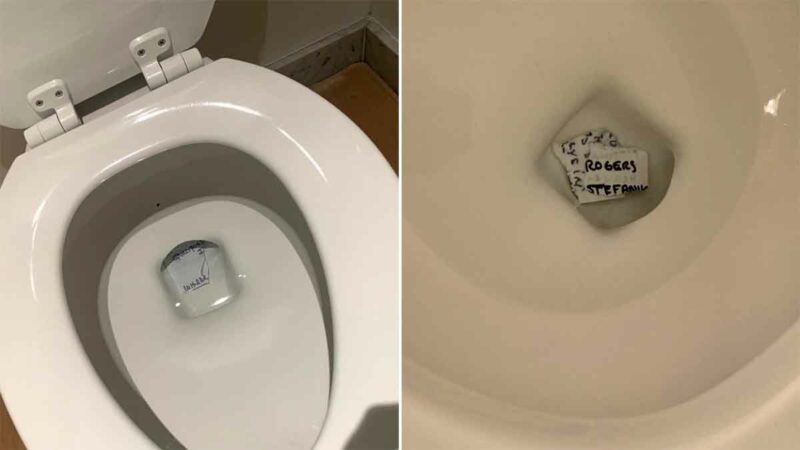 It should amuse us how the lies never change. They offer them up to a credulous audience which wolfs them down because the only other option is to admit that things are going very bad and dreams are not only going to be shattered, but never come to pass.

The swamp never runs scared. It always doubles down. Leftists do this because they are fanatics with a binary solution set: either they succeed and take power, or whatever insane stuff they have been doing gets revealed and then they are exiled or executed (to history these are equivalent: they no longer exist in the civilization).

Toiletgate launched with a couple of pictures of what look like documents written in Trump’s handwriting torn up and thrown in a couple toilets. The Left argues that this shows that he was destroying documents; even basic analysis tells us that he may write lots of things and tear them up and throw them in toilets.

There is no way that these pieces — they look like fragments of an A4 or letter size paper — would clog a toilet. Nor do these represent lots of secret information. Most likely, like lots of businesspeople, Trump wrote some notes and tore them up because he did not want them exploited by others.

Let us face it: for a single sheet of paper, it is easier to tear it up and flush it then hand it off to others to shred, especially when you cannot be sure which members of your staff are against you. But the Left saw and photo op and, since no one holds them accountable for their lies, figured they would lie about it.

Then they continued their attempts to make Trump look guilty of something (they do not care what, only that there is something to generate enough headlines). They sent the FBI to raid Mar-a-Lago and take away some evidence, knowing that to their desperate audience, this is as good as a perp walk.

We might see this as an inverse Watergate. Instead of a candidate burgling the opposition, the government has decided to burgle a candidate more for the headlines than in an attempt to find anything actually illegal. They know that he has done nothing illegal.

This might be why he tears up his notes and flushes them, by the way. When your opposition use the media as an offensive weapon, you want as little attributed to you as possible, because even the innocent becomes somehow sinister in the endless spin cycle of a lapdog yellow press.

They will find nothing, as usual, but this will not stop them. They will seize on something innocent, project a context onto it of wrongdoing, and try to put him on the defensive since he is fighting in the court of public opinion. Luckily his voters seem savvy to this technique and therefore resistant to it.

However, this shows us the Clinton machine — it is almost certainly the China-funded, DOJ-controlling Clintons behind this, and Biden — acting toward its endgame. It is out of other options; it has been found out, and therefore must seize power before enough people wake up and delegitimize its perceived moral consensus.

We are seeing the end of the Election 2020 drama. Trump has proven his point in Maricopa and elsewhere, and enough people believe that illegitimate voting is going on to erode confidence in the vote. Consequently the Left is trying to seize power and get safe RINOs back in control of the Right.

At this point, we in the West have a binary solution set just like the Left. Either we overthrow and remove this illegitimate government, starting by voting it out and demanding election integrity, or it is going to use its Hart-Celler voters and goodthinkers to seize power forever.

If it does, we will see each other again soon in the gulags. No one thought that the French Revolutionaries were going to murder whole families, or the Bolsheviks kill twenty million of their own people. History repeats itself. The Leftist pursuit of Utopia is insane and therefore, brings only insanity.

How The Benedict Option Broke Your Family | Consumerism, The Mentality