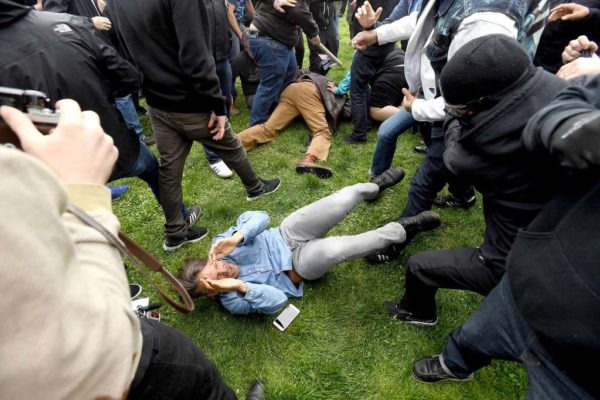 Most people exist in a comfortable bubble created by their ability to ignore long-term problems. This enables them to live in the midst of insanity and incompetence and still function, mainly because to them, events farther away than the next paycheck are as mystical as Zeus and as distant as Mars.

As a result, few of them recognize that their society has already collapsed, and that we are living in the stage after a social system breaks, where it slowly declines into third world status through disorder, corruption and incompetence.

If one understands history to be cyclic, it becomes clear that a cycle only arises when there is some starting point of sanity, from which events diverge, ultimately bottoming out and forcing a return to the start of that cycle. We know what works in the West:

Those are the conditions of a Golden Age, and as we have deviated from them, our fortunes have waned. It has taken many centuries to fully visualize this mainly because we were cruising on the inertia of the past, most notably the vast number of talented and morally good people among us, but also our technology and military might.

Until we start heading back in that direction, not necessarily fully achieving it but moving toward it our hearts and minds and therefore gradually implementing it, we will head in the other direction, which is toward the bottom of the cycle, or a third world mentality that produces a society known for low levels of social order, hygiene, principles, wisdom, integrity and efficacy.

We can glimpse the nature of a third world society by observing attributes of it in already fallen societies:

…The barrage of criticism leveled at Samuel Huntington’s notion of a “clash of civilizations” in no way lessens the vital point he madeâ€”that however much the grouping of peoples by religion and culture rather than political or economic divisions offends academics who propound a world defined by class, race, and gender, it is a reality, one not diminished by modern communications.

Third world cultures reward those who are individualistic, or concerned with themselves first before others or principles. This leads to a mentality that pervades all levels of their activity:

In every society information is a means of making a living or wielding power, but Arabs husband information and hold it especially tightly. U.S. trainers have often been surprised over the years by the fact that information provided to key personnel does not get much further than them. Having learned to perform some complicated procedure, an Arab technician knows that he is invaluable so long as he is the only one in a unit to have that knowledge; once he dispenses it to others he no longer is the only font of knowledge and his power dissipates.

In an individualistic culture, there is no reason to share information because the goal is not to win the war, but for the individual to retain or expand his position of power. Comparisons to tyranny are apt here: the goal of power is power itself when power is not directed toward purpose and principle.

Through natural selection, this creates a population who excel at tasks that are defined for them, but are unable to reason:

Because the Arab educational system is predicated on rote memorization, officers have a phenomenal ability to commit vast amounts of knowledge to memory. The learning system tends to consist of on-high lectures, with students taking voluminous notes and being examined on what they were told. (It also has interesting implications for foreign instructors; for example, his credibility is diminished if he must resort to a book.) The emphasis on memorization has a price, and that is in diminished ability to reason or engage in analysis based upon general principles.

For this reason, third world societies tend to be “crab buckets” where people scramble for positions of power and wealth, and then treat these as sinecures, or entitlements through status, and ignore the task at hand. This leads them to use other people as means-to-an-end of not a goal, but of personal power, a condition known as “control” that is the mental state of tyranny.

Because of that, social order is impossible:

This is primarily a function of the fact that the enlisted soldiers simply do not trust their officers. Once officers depart the training areas, training begins to fall apart as soldiers begin drifting off. An Egyptian officer once explained to me that the Egyptian army’s catastrophic defeat in 1967 resulted from a lack of cohesion within units. The situation, he said, had only marginally improved in 1973. Iraqi prisoners in 1991 showed a remarkable fear and enmity toward their officers.

We see similar conditions in third world politics and policing. Politicians make promises and enrich themselves through corruption instead of delivering on those; police forces tend to view their role as a chance for bribes rather than a function in itself. Government and companies fall apart because of lack of cohesion, and quality is low across the board, mirroring the problems seen in their militaries.

This creates a society of obedient and conformist people who are oblivious to the consequences of their actions or the possible benefits to be obtained for society at large through fulfillment of their roles:

Decisions are made and delivered from on high, with very little lateral communication. This leads to a highly centralized system, with authority hardly ever delegated. Rarely does an officer make a critical decision on his own; instead, he prefers the safe course of being identified as industrious, intelligent, loyalâ€”and compliant. Bringing attention to oneself as an innovator or someone prone to make unilateral decisions is a recipe for trouble. As in civilian life, conformism is the overwhelming societal norm; the nail that stands up gets hammered down. Orders and information flow from top to bottom; they are not to be reinterpreted, amended, or modified in any way.

I have excerpted the portions of this article that reflect widespread third world behaviors, and left out some specifics which belong to Arab cultures.

The broader point is that in highly individualistic societies, external factors matter more than internal factors. This is how they got to a third world state: their society advanced to the point where playing the game and working the system became more important than efficacy in the real world. All civilizations create these false targets and die by them.

We can see similar things happening in the postwar West:

Buchananâ€™s assessment of the impact of the defeat in Vietnam on American society has real power to it: â€œThe American establishment that led us to victory in World War II â€¦ would never recover from Vietnam, never regain the confidence of the nation. For Vietnam was not an unwinnable war for a country that had reduced the Japanese empire to smoldering ruins in four years. â€¦ The simple truth is the American establishment lost the war in Vietnam because it lacked the will to win it.â€

This is where Buchananâ€™s philosophy begins. The country that Nixon inherited in 1969 was â€œno longer one nation and one people, but a land divided by war and race and culture and politics.â€ The Establishment was feckless, guilt-driven, hypocritical.

In third world systems, this domination by external thought creates people more interested in advancing themselves within the system than in achieving results in the world outside of the system. This is why the Americans lacked the will to fight complex wars: there was too much infighting as individuals tried to rise above others by using the existing (false) hierarchy.

The doorway to third worldism begins with the creation of a system that prioritizes the individual over purpose, and therefore, incentivizes people to work against each other, eventually destroying the idea of purpose and goal itself. This mentality exists within a cluster of traits and methods: democracy, egalitarianism, Crowdism, solipsism, Leftism, individualism (DECSLI).

In the grips of these, the West collapsed. World War Two was its last attempt to solve its problems before giving in to the inertia of the philosophies which had become socially popular in a wave starting with The Enlightenment™ and formalized during the French Revolution.

While Hollywood spins us collapse fantasies based on single terrifying events, like nuclear war or giant storms, the reality is that collapse of the West is easy to predict: we will become Brazil.

Collapse means the loss of higher civilization and the return to the natural default state of humanity, which is third world style subsistence living while being ruled by self-interested (individualistic) overlords.

There will be strong corporations, limited by their ability to find talented people among the new pool of mixed race, beige, mid-90s average IQ people. These will thus be profitable but bloated and ineffective, hampered by corruption which will take 30% of every deal right off the top.

That will eliminate the ability to invest in the future, and so innovation will stagnate and basically die off.

The rich will have enclaves protected by private security. This will usually work, until someone figures out how to bribe private security and then kill the rich and take their wealth. Governments will do their best to milk the rich until they run into crisis, at which point they will liquidate them and take their stuff as happened during the French Revolution and its Terror, which will leave the civilization with fewer capable people and continue the slow grind into irrelevance.

Places like Brazil are eternal. Everything always gets worse, but at such a low level, this has little effect on daily life. People will still have jobs. Most of them will not lose their lives in violent crime, but all will be victimized. As a result, people will become extraordinarily selfish, and the grinding will continue.

Societies like this can continue indefinitely. If a stronger force comes along, they will be conquered. Otherwise, they will exist in mediocrity and steadily breed out anyone who can tell the difference, creating a vast population of selfish oblivious incompetents whose only salvation is that they are not mentally equipped to notice how bad things are or how much easily they could be better.

Third worlding is part of the civilization cycle, and the only stable points of this cycle are at the top in a Golden Age or at the bottom in the default state of humankind, which is selfish mediocrity.

Leftism is a rationalization of decline that also furthers decline. Like most diseases, it is both its own cause and the force that makes it grow in power. It shapes people to make them ready for existing in a third world state where they will spend all of their energy focused on themselves, and be unaware of what goes on around them. People revert to a yeastlike state of mind.

These societies are the most individualistic places on earth. Individuals have jobs and almost no other obligations. Most of them will report being happy with life, until told that they can have more through redistribution. Then they enthusiastically vote Leftist, furthering the hold that mediocrity has on the society.

If the West is to resist this process, it must accept that it is already well on this path, and needs to fundamentally change from its egalitarian assumptions if it is to restore itself.

In Praise Of Leisure | Crushing The Continuity Of Consciousness