The wisdom of myth 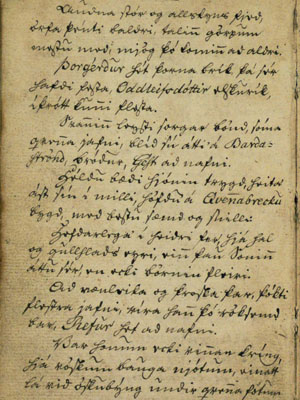 The Icelandic Sagas are a treasure of Western literature. They have captured our hearts and minds for generations. Although they were written by different anonymous authors, they are similar enough to be grouped together as a collection of Sagas. There are the old standbys like Egilâ€™s Saga and The Saga of the Volsungs, but there are also the more idiosyncratic sagas such as The Saga of Ref the Sly.

The Saga of Ref the Sly is a shorter Saga and it is prized for being quite simply very entertaining. â€œLearning lessonsâ€ by way of literature is fine, but whatever happened to just enjoying a story? So much of our intellectual enterprise presupposes that â€œgoodâ€ literature must be â€œdeep,â€ â€œmeaningful,â€ and able to be analyzed and picked apart. We must â€œlearn lessonsâ€ and the author must be psychoanalyzed so as to show how they are a â€œreflectionâ€ of the era in which they lived. What a bore. How fortuitous it is that the authors of the Sagas are anonymous.

I rented a version of Pride and Prejudice from the library last year and it was plastered with footnotes. On the one hand, it was an impressive edition, filled with illustrations showing what the world of which the story described must have literally looked like. Some of the footnotes were informative, but every third sentence was a footnote. I was perpetually distracted and I had to train myself to ignore them. The actual story was virtually lost. What a shame.

What a drag it must be to have to analyze a story in order to appreciate it. Why not just sit by the fire and lose yourself in the world of fantasy and adventure instead? Interpretation is really exhausting.

As Jean Baudrillard points out, by way of Italo Calvino:

â€œThe lesson of a myth is in the literalness of its narrative. Every interpretation impoverishes the myth and strangles it. Better to meditate on each detail patiently, never abandoning its figurative language.â€

Even dreams, in their psychoanalytic versions, lose their literal character. They fall prey to meaning and interpretation. Dreams, however, like myths, are cunning. They contest, like language in general, what we want them to signify. There is a cunning of literalness that goes against analytic exegesis and that resuscitates ever so subtly (is this not the secret of literacy?) the world-as-is, a world which is, literally speaking, only what it is.

Despite all this, let me take you through the Saga of Ref the Sly to rouse your interest. I will not spoil all of the fun, but there are a few things we can learn.

For one thing, Ref Steinsson is a late bloomer and somewhat lazy as a child. He prefers to sit by the fire. When his father has died, and his family is wronged by the neighbor, he is not very quick to repay the slight. He has a long fuse and he must be roused to action by his mother.

Nevertheless, he ultimately knocks at the neighborâ€™s door seeking recompense. The neighbor, knowing Refâ€™s mild mannered reputation, doesnâ€™t take him seriously. He gives Ref a dull knife and a whetstone, saying, â€œOne should offer an untempered blade to a softy.â€ Ref slays him right then and there, and justice is done.

On the run, Ref is taken in by an old man, a family acquaintance. The old man asks him if he has ever built a ship. Ref says he has not; Ref has little practical experience in such things. But there is something about Ref, and the old man believes in him and gives him a shot. Ref works day and night, nobody is allowed to see his progress. When all is done, and the ship is ready to be unveiled, the old man inspects it. It is a masterpiece! The old man gives Ref the ship as payment. It is revealed that as a child, Ref had a toy ship and it is intimated that this is what inspired him.

With the ship, Ref sails to Greenland and he builds his homestead. Ref marries Helga, the most beautiful woman in all the land. One night, Ref is coming home and he sees a polar bear. He gets the heck out of there, but several brothers of another family see this and laugh at his evasiveness taking it for cowardice. The men slander Ref throughout the town. They call him Ref the Effeminate and Ref the Homosexual.

Once again, Ref is slow to act. He basically ignores the slander as he doesnâ€™t care what other people think of him. He needs to be roused by Helgaâ€™s family. Once sufficiently roused, Ref proceeds to slay the brothers and the father, five men in all. The news of the killings went around and it was regarded as quite a job to be done by one man in one evening. Ref was thought to have avenged the slander sharply.

Ref goes into hiding in the wilderness of Greenland with his family and he is not seen for years. One of the friends of the family of the slain, however, has not so quickly forgotten what happened. He employs the help of one of the Norwegian Kingâ€™s men. They find Ref and try to goad him into battle.

Ref isnâ€™t having any of it, however. Heâ€™s too smart for them. They try to burn his house down, but miraculously, water comes pouring out of the walls and extinguishes the fire! It turns out that the master craftsman, Ref, has built an intricate conduit system, using gravity, to essentially funnel an endless supply of water from the hillside on which his house is built. The men trying to kill Ref proclaim this to be witchcraft!

I will stop there out of respect for Jean Baudrillard and Italo Calvino. There will still be plenty of fun if you decide to read it. Nevertheless, there is a lesson or two worth noting.

The first lesson regards the personality of Ref. The recurring theme is that he has a long fuse and ignores slights. He prefers evasiveness and subterfuge. As the story unfolds, this is revealed not to be a defect, but a strength. While everyone else is running around like chickens with their head cut off, playing tit for tat, Ref is simply plotting quietly.

This reminds us of the saying, â€œdiscretion is the better part of valor.â€ This is an illustration of Aristotleâ€™s conception of virtue. Virtue is neither excessive nor deficient. Ref the Sly is perfectly virtuous with regard to valor. Ref waits for the right time and he picks and chooses his battles wisely.

In battle, Ref often lurks in the shadows, he uses disguises and he creates distractions. He is very crafty and highly adaptive to his surroundings. On the other hand, Ref is also exacting and something of a perfectionist. When he is challenged, as he is with building his first ship, Ref rises to the occasion.

Ref is a late bloomer and a â€œmale Cinderella.â€ But the late bloomer may be the most dangerous of them all. Although criticisms of immaturity are one thing, beware of those messages to â€œgrow upâ€ and â€œget with the program.â€ Often this is a veiled way to try to goad you into doing what they want you to do. This is where the obstinate child and the adult unconcerned with social approval both find each other. Proper experience does not scoff at innocence and proper innocence does not resent experience.

Finally, with regard to Refâ€™s conduit system being called witchcraft, we must remember Arthur C. Clarkeâ€™s thought that â€œany sufficiently advanced technology is indistinguishable from magic.â€ Ref is an expert carpenter and master of ingenuity; to others this appears as magic.