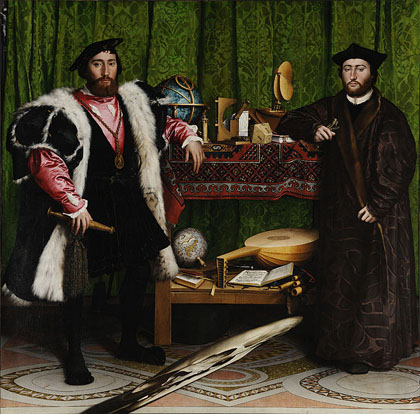 In this picture by Hans Holbein the Younger entitled â€œThe Ambassadors,â€ an odd shape floats at the bottom. It is a skull or â€œMemento Moriâ€ (reminder of mortality) drawn in the style of anamorphosis.

Anamorphosis is an artistic technique that distorts an image unless one views it at the proper angle or perspective. If one were to see this picture in person, and look at it from the anamorphic angle, the skull would come in to focus and become undistorted, at which point, the rest of the picture would be hard to make out. An almost miraculous effect!

But do you see the paradox here? How can we know the unknown? Once something is known, it is no longer unknown. We can never catch up to this because as soon as we get there, it is not what weâ€™re looking for. How absurd it is to demand to know the unknown! The known and the unknown are radically different categories, and you cannot understand the one from the perspective of the other.

All knowledge was originally unknown because for something to be known, it first had to be unknown. This implies at least an equivalent relationship between the known and the unknown. Now imagine all the things that will one day be known, but are unknown today. This implies an endless supply of the unknown. Now factor in all the things that could potentially be known, but perpetually remain unknown. Logic implies that there is more that is unknown than is known.

So from where we sit, all that is known was once unknown and all that we will know is currently unknown. With this in mind, we can say that the natural, default state of the universe is the unknown. Similarly, from where we sit, the anamorphic skull is distorted. It merely requires the proper perspective to come into focus. The unknown, like death and like the anamorphic skull (metaphorically speaking) is the perspective of the universe, not the human.

At this point we must admit that our theory of death is merely a hypothesis. It seems to be justified but that is because we have already worked our conclusion into our definition. We say that death is material become unanimated, and it is true precisely because we have defined it ahead of time.

But what we are actually defining is not death. It would be more proper to say that we are merely assigning the word â€˜deathâ€™ to the phenomenon of material becoming unanimated. We are still not saying what death actually is. Our conception of death is too straightforward and without perspective. 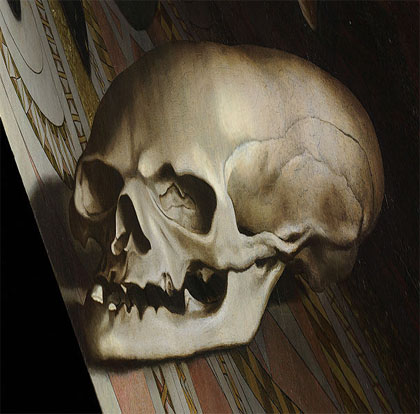 The medieval technique of anamorphosis almost seems like a magical phenomenon, yet there it is for all to see. Although mathematically and rationally derived and explained, it creates an ultimate end effect of bewilderment. It is just like the stick in water. The stick appears bent, but it is not. It can be mathematically and rationally explained, but the end effect is still bewildering.

Obscurantism has received a bad rap in intellectual circles, but it is actually the opposite idea, what we might call â€œobvious-ism,â€ that could prove to be much more fatal. We can rationally and mathematically explain away everything by way of knowledge. Knowledge is a fine tool but it is not a purpose and all the knowledge in the world wonâ€™t necessarily give you a purpose.

You say you want meaning? You say you want a mission? You want a purpose beyond your human life? You say youâ€™re dying to get in here and fight it out? Here is an opportunity: fight on behalf of the unknown, the universe, and the anamorphic skull. Do not rationalize. Make things enigmatic like the medieval technique of anamorphosis. We need no more knowledge. Let us work on behalf of our greatest ally and most abundant resource â€“ the unknown!

This essay and hypothesis is an anamorphic message from the Land of the Dead. Our foe is the obvious. Let us relegate knowledge to its proper perspective. For every one thing that is known, there are ten things that are unknown. Let us admit and propose that the ultimate, end effect of reality is actually bewildering and mysterious.

Let us do away with rationalizing reality. When our theories of reality are made more mysterious and more bewildering than initially thought, man, himself, will have no choice but to act in a more mathematical and rational way.

Human life becomes distorted and anamorphic against a supposedly easily explainable universe. However, when the universe becomes mysterious, humans have no choice but to get their act together. Man is really not at his finest when he basks in knowledge. Manâ€™s finest hour is when he confronts and challenges the unknown.

After all, the unknown is what brings out the best in man.

Unsustainable | Not a mystery