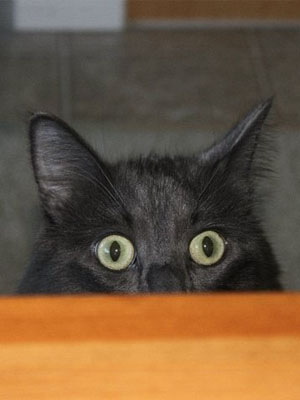 Some years ago, in London, England, I went often to practice at a Ki-Aikido club.

It was there that I met a visiting student from another club, whom I was quite attracted to, and, as it turned out, so was she to me.

Nothing came of that attraction for a week or two, until she mysteriously phoned me, although I had not given her my number, and proposed that we meet for coffee.

So off I went, with high hopes, over the Hungerford Bridge, to the Festival Hall Cafe, on the south side of the River Thames, for what I imagined would be an interesting and stimulating tryst.

It all started well enough, and almost immediately, she informed me that she owned a house, and was hoping to meet someone to share it with. This seemed more than a little forward, but in these modern times, nothing particularly unusual.

We conversed about this and that, quickly finding out about each other, until she mentioned some event or other she had seen on the television news, and what did I think about it?

I never read the papers, I said, or watched the news. And before you could blink, it was the beginning of the end.

You see, to that point, politics had never raised its ugly head in my life. I knew not a thing about it. Right, left, who knew what they were, or cared? Almost everybody, it now turned out. Everybody but me.

She started berating me in varied and tangential ways, while I wondered what on earth she was talking about, or why. I tried several times to turn the conversation back to friendlier times, suggesting that it might be a good idea to start over.

But no. Without knowing what I had done, or how it had happened, only twenty minutes in, the date was effectively over. She leaped to her feet and announced: “I’m leaving!”

She didn’t actually leave though; she stood before me, hands on hips, looking down, expecting, no doubt, that I would contritely beg her not to go.

I considered her for a moment, thinking how proud and attractive and fierce she looked, and what a damned shame all this was, before deciding to help her out by saying:

And off she flounced, never to be seen again.

This event would come to be known as The Famous Twenty Minute Date, and it is a tale my wife enjoys greatly. For what horrors might have come to be, had it actually ended well, and I had meekly gone off to Ealing, or Ruislip, to some dingy terraced brick house, to be dominated and brainwashed, instead of going on to meet the woman who would become my lovely future wife?

It is an event that I sometimes recall, and run though, trying to make some sense of it. And for a long time I couldn’t. But now I can.

Leftists are right, you see. About everything they hold an opinion on. And they hold opinions about absolutely everything, and so they are always right. This is the mark of the leftist. Along with being impossible to engage in discussion, debate, or reason. Any attempt at reason only provokes rage. Better, by far, not to bother.

This was my first conscious encounter with politics, although I realize now, I had been encountering it forever, without knowing what it was. Having missed a quarter century of political evolution in the UK, by being otherwise engaged in various foreign countries, I had returned to a place I no longer recognized, filled with people who were unrecognizable as the people I once knew.

This was my first conscious encounter with radical leftism, but soon I was getting called racist, misogynist, homophobic, Islamophobic, bigoted, chauvinistic, fascist…

Interesting, really, since I was none of these things. And that those who were calling me these things so obviously were the very things they claimed that I was.

When really, all I was, was an older version of what I had been a quarter century before, when what I am was normal.

No. You can’t reason with a leftist. Which is a shame, but there it is. There is no common ground that they can recognize. You’re either in total agreement, or it’s total war. For all their claims of championing diversity and equality, as soon as they encounter anything that looks like them, but is not exactly like them, they are compelled to wipe it out.

I was content, for a long time, not knowing anything at all about politics. Confused, perhaps, but happier, in an innocently naive way. Then I had to go through many years of being not very happy at all, as I came to grips with this monster that had unexpectedly spawned before me. But now I have come to grips with it, and know it for what it is. That it is no failing of mine, that such people loathe and hate whatever it is they assume I am, or represent. That it is, in fact, everything to do with themselves.

And once again, although no longer innocently naive, I am content.