The end of ideas 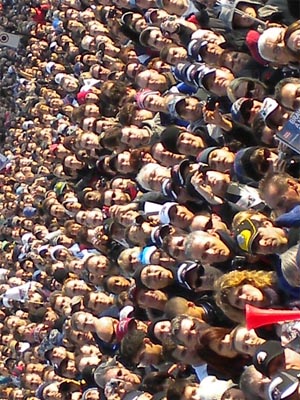 When you were in school, you probably noticed that some kids seemed like natural leaders. They were ahead of the pack because they were good at stuff — sports, school or socializing.

When our culture turned leftist in the 1990s, inheriting a president and its ideals from the passive revolts of 1968, the popular kids shifted in composition. It was no longer the football players, honor students and rich kids; it was the freaks, the formerly unpopular, the nerds, outcasts and other rebels.

They had a simple appeal: self-hatred. Our country is bad; our culture is bad; the majority is bad. The only good thing is being different. Be unique, be your own person, have a life, don’t follow the herd, who cares about who succeeds? What matters is being true to yourself, which you show us by being different.

As it always does under liberalism, the focus shifted from “let’s win at life” to “let’s express ourselves and act out our desires, sensations and self-image.” The goal is not end results, but a constant suspension in a method of constant self-expression that makes the individual feel good. Hang the consequences.

Thus continued a gradual process that began thousands of years ago. It flowered in Athens, where democracy went from being a council of wise elders to mob rule, and then into Israel, where anti-Roman revolutionaries perverted the Jewish notion of morality into a pissing contest for egalitarian brownie points. It even blighted Rome, turning a prosperous empire into a decadent and self-pitying collapse.

In revolutionary France, and Russia, it really gained momentum and showed its true colors: a Crowd of selfish individuals, demanding that no one tell them what to do and yet that the group support them, as a means of excusing their own failings in life.

Their purpose was the opposite of what guided conservative Europe, which was a desire to confront one’s own fears and inadequacies and beat them, as a means of achieving better end results and a society of wisdom, beauty and technology.

A recent article in the New York Times spells out the consequences of this gradual liberalization:

If our ideas seem smaller nowadays, itâ€™s not because we are dumber than our forebears but because we just donâ€™t care as much about ideas as they did. In effect, we are living in an increasingly post-idea world â€” a world in which big, thought-provoking ideas that canâ€™t instantly be monetized are of so little intrinsic value that fewer people are generating them and fewer outlets are disseminating them, the Internet notwithstanding. Bold ideas are almost passÃ©.

It is no secret, especially here in America, that we live in a post-Enlightenment age in which rationality, science, evidence, logical argument and debate have lost the battle in many sectors, and perhaps even in society generally, to superstition, faith, opinion and orthodoxy. – NYT

Let us quickly summarize: we are living in a post-idea world because ideas are not popular and therefore, not profitable.

In other words, what people want to believe trumps what they can logically believe. We have left reality behind, and replaced it with socialization.

Then again, this was a clear consequence of letting the individual do whatever he or she wanted. Equality makes every decision valid, which means the individual is no longer beholden to any checks on their behavior except laws, social taboos and economics.

As society expands with technology, and it gets easier to earn a basic living, these constraints even relax. As long as you get some kind of job, and keep showing up for even mediocre performance, the paychecks keep rolling. So do the credit cards. This leaves lots of time for insanity.

Over the past forty years, we have seen the family unit collapse as social standards collapsed, and the ability of any two people in any Western country to have anything in common except the trivial collapse. We have seen our institutions follow in this collapse, and now, the performance of our leaders and economy.

Art died a painful death, perhaps first, being converted from the pursuit of meaning to the pursuit of the unique, with meaning explained as a form of justification through increasingly convoluted theories. Despite this seeming to be the arrival of big ideas, it was a retreat from large concepts into small granular explanations.

What is left? An emptiness so profound it impels us to self-destruct, or find some way to embrace the plastic and hollow as “meaningful”:

An artificial appropriation of different styles from different eras, the hipster represents the end of Western civilization â€“ a culture lost in the superficiality of its past and unable to create any new meaning. Not only is it unsustainable, it is suicidal. While previous youth movements have challenged the dysfunction and decadence of their elders, today we have the “hipster” â€“ a youth subculture that mirrors the doomed shallowness of mainstream society. – AdBusters

Mainstream and underground together are different symptoms of the same cause, which is a lack of direction. When we replaced reason with popularity, we replaced the notion of any cause in common. That means there is nothing under the surface. Everything is appearance.

You can only drink so many beers, snort so many drugs, take home so many sluts, play so many video games, and express yourself to the empty sky so many times before you see the futility. But what is the option? To deviate from this shallow path is to be seen as a public enemy.

“So we beat on, boats against the current, borne back ceaselessly into the past.”