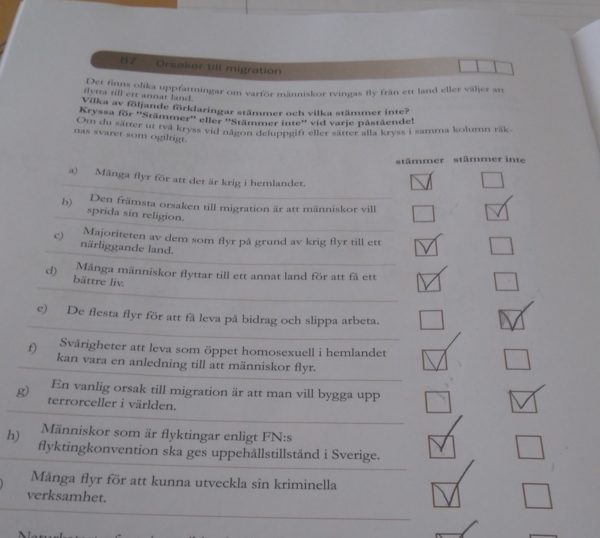 It is time to remind people that Leftism is pathological, and like any mental virus, it accelerates as it is adopted. These mental viruses create echo chambers where people seek each other out on the basis of being infected, and then they validate and rationalize their infection to one another, which ends with each member feeling a great commitment to spreading the virus further.

The Swedish national examination above, as posted by a Swedish citizen on Reddit, translates as follows:

Hello and welcome to the Swedish National Examinations. These tests, taken by all 9th grade students in Sweden, will largely determine your grades and whether you can complete your primary schooling and can continue to Gymnasium, so it is very important that you do your very best. Are you ready? Okay, let us begin with social sciences: causes of migration.
There are many interpretations as to why people are forced to flee from a country or choose to move to another country. Which of the following explanations are true and which ones are untrue? Cross “True” or “Untrue” after each proposition! If you put two crosses on any task or put all crosses in the same column the answers are considered invalid.
a) Many flee because there is war in their home country.
b) The primary reason for migration is because people want to spread their religion.
c) The majority of those who flee because of war flee to a neighboring country.
d) Many flee to another country to get a better life.
e) Most who flee do so to live on welfare and to avoid working.
f) Difficulties in living openly as a homosexual in the home country could be an explanation for humans fleeing.
g) A common reason for migration is that one wants to establish terror cells in the world.
h) People who are refugees according to the UN’s refugee convention should be given residence in Sweden.
i) Many flee to develop their criminal operations.
j) Natural disasters sometimes force people from their homeland.
k) A majority of those who flee from their country come to Sweden.
l) Political persecution in the home country is a common reason that people flee.
m) People who flee because of poverty should be considered refugees according to the UN’s refugee convention.

The key point here is that every “correct” answer completes a liberal talking point, just like how cult leaders demand that people recite back to them the tenets of the cult ideology.

On the surface, these are factual questions about real world issues, but each has an implication which cannot be opposed in social settings. For example, if immigrants are fleeing persecution against homosexuals, it is hardly sociable to oppose immigration, since Swedish society prides itself on being open and accepting of homosexuals.

Like many other Western nations, the Swedes have decided to prepare their children for social life, and not reality, which has a short-term benefit but in the long term, makes everyone miserable and collapses the nation.