Street gang culture in Britain and perhaps most of Europe highlights something interesting. The gangs have no underlying culture to unite them, so what do they use to identify themselves? Postcodes.

Yep, how fucking pathetic thatÂ in the UKÂ morons, mostly low IQ immigrants from third world countries,Â are spray painted offensive digits on different homies turf, forcing them to strike vengeance by stabbing and shooting each other,Â all thanks to the post office;Â

They chased him through the children’s play area, shooting frantically at the fleeing figure. For almost a mile Jonathan Matondo ran through these Sheffield streets with four armed “hunters” on his heels. Just beyond the playground, the 16-year-old found himself cornered. Matondo was shot at the place where graffiti now say: “Peace. Love. Unity.”

In the district of Burngreave, such well-meaning sentiments are buried beneath one of inner-city Britain’s bloodiest gangland feuds. Matondo’s murder 18 months ago intensified the spiral of retribution between gangs named after two of the city’s postcodes. Five minutes from where he was shot, Spital Hill still marks the front line between the S3 crew of Pitsmoor and the S4s from Burngreave. Gun culture sweeps through Sheffield estates as postcode gangs do battle

Police maintain that Sheffield is one of the UK’s safest major cities, yet within this small knot of estates perched on a hill north of its gentrified centre a gang culture rules. Ten days ago a drive-by shooting left 1 dead and 3 injured. This month Sheffield crown court heard how an S3 gang member ordered a killing from his prison cell. The feud between the S3 and S4 gangs has led to 3 murders in 18 months. A police dossier chronicles at least 40 occasions on which the two gangs have opened fire on each other. 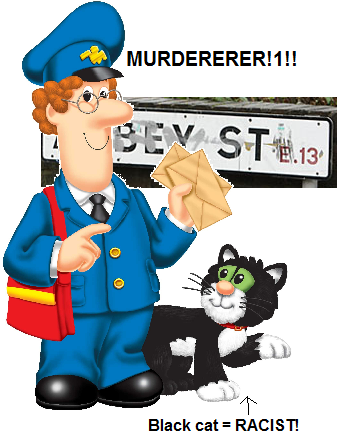 This is unacceptable that poor people are shooting each other thanks to the post office in an identity crisis, nowÂ the post office has blood on its hands, maybe it should be closed down and those responsible should be hanged forÂ the creation of these gangs,Â so no more innocent lives can be lost to this postcode-ism!1!!

Steven Lewis, 15, was set upon by a group of youths, knifed repeatedly in the chest and left to die in his 16-year-old sister’s arms. Friends of the teenager on Sunday linked the killing to a gang from a neighbouring area in east London.

‘There is rivalry. It is neighbourhoods, postcodes â€“ E13 versus E16,’ claimed 15-year-old Leroy Baptiste, who laid flowers for Steven. Steven was murdered on Saturday night after a church hall party held by a charity which campaigns against violence in black communities.

The party finished at 10.30pm and 15 minutes later police on a routine patrol came across Steven’s body in Plaistow. ‘He was stabbed through the heart. His sister was holding him. His little brother saw everything and he’s just 13,’ a member of Steven’s extended family said.

This has been happening for quite awhile now, most of the news is old, but I can’t help but notice going around my town really stupid graffiti depicting which areas they receive their post, and being mostly africanÂ immigrants doing this with a few chavy undermen following in their shadow, as if that was the meaning for their entire existence – partially fuelled by the media and theirÂ brainless promotion of rap,Â hip hop, dub-step and other wankensteins of creation.

I can just imagine these kind of backward retards getting into politics and starting World War 3 because Iran has a different postcode, let’s wait and see.

Artificial trees, an insult to real ones | Pakistan floods, a self inflated natural disaster