We have been seeing in the news recently about the Pakistan floods and how evil nature is harming the poor, innocent Pakistani people, here’s a few reasons why we shouldn’t concern ourselves with other societies problems:

Flooding has submerged whole villages in the past week, killing at least 1,600 people, according to the UN. And the worst floods to hit the region in 80 years could get worse, as it is only midway through monsoon season.

According to the federal flood commission, 1.4m acres (557,000 hectares) of crop land has been flooded across the country and more than 10,000 cows have perished. A UN official, Manuel Bessler, told the BBC that with crops swept away by floodwaters, some Pakistanis could be forced to rely on food aid to get through the winter. 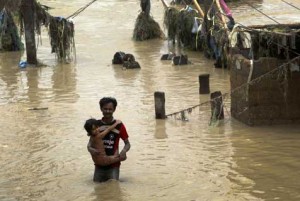 Nature has many ways of thinning out the herd, especially in places like Pakistan where reckless overpopulation has created hordes of simplistic people with a mean average IQ of 81, that then, unable to create a higher civilization from what they have inherited, consume and savage the wildlife and landscape:

The current floods could also be blamed to some degree on deforestation and more people living in flood-prone areas as the population keeps growing.

Pakistan has lost vast areas of forest over the past few decades, while overgrazing often strips degraded land of whatever plant cover is left. The government has set a target to boost forest cover from 5.2 percent to 6 percent by 2014.

What may be the case here is that a more severe natural event has occurred where a more severe human event has occurred, that means having lots of offspring without weeding out the less desirable has negative effects on the surrounding ecosystems; which would be required to maintain a steady population that evolves in quality rather than growing in quantity.

The usual solutions are not of this quality, unfortunately, and are destined to fail by neglecting that simple fact, the writer then goes on to explain the usual, socially acceptable explanations of climate change:

Scientists say nations will need to start adapting to climate change impacts such as more intensive droughts and floods but poorer nations with limited cash face the toughest challenge.

If they were that concerned about surviving they would build away from the flood plains and remove the least productive individuals thereby solving overpopulation and impoverishment; they also need to allow the majority of their land to be forested naturally and allow their most intelligent higher rights to then build more streamlined infrastructure so that when heavy rains come, it doesn’t get dragged under a flood of aid and stupidity from self hating westerners throwing money at the problem. 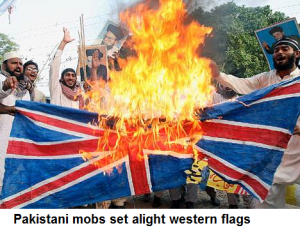 Instead they could have their intelligent generate wealth for themselves, or if they’re too stupid, they can perish naturally allowing a more competent society to conquest it, but that’s not going to happen whilst modern society still slouches its clumsy altruistic-domesticating tentacles all over the planet, when clearly they do not want it.

But Pakistan, being a corrupt society itself, does however prefer convenient solutions rather than paying attention to the signs that reality shows us;

Don’t be a guilty white prole, don’t give aid to a failed state, be instead concerned for your own survival because any disaster that occurs back home will receive no aid back from them, and you will have injected all of your wealth into making the problem monstrously larger and only prolong the misery.