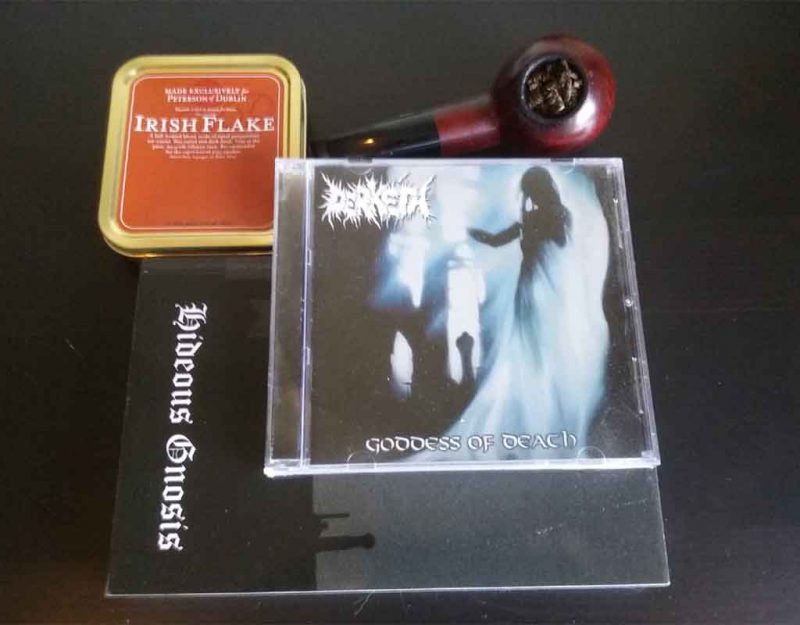 In one corner of our kitchen sits the Everything Cabinet. It is tall and deep with several compartments. We filled one with spices, another with tobacco, a third with old books, and the top one remains a miscellany area with everything from candles to oily old tools.

If you walk into the kitchen, you will find yourself drawn to the Everything Cabinet by the scent that it emits. This combines the gentle aromatic overtones of the various spices, the sweet hay and campfire smells of the tobacco, the folded musty odor of the books, and an aura of faded labors from the assorted junk.

As I am fond of saying, every kitchen has a “miscellaneous” drawer, and if not held back, over time it will take over the whole kitchen. However, the Everything Cabinet operates by some different principle, seemingly selecting things that smell good together.

It tells me that despite our best attempts to impose order, sometimes nature knows a better way of keeping things organized. The Everything Cabinet lacks any kind of organization, but so does any placement of these objects in a kitchen. Instead, placing them in one cabinet makes a little refuge of pleasant scents and promises of future delights.

Sometimes what we think is best, is not, and what would not occur to us to do shows a more important function in life. A cabinet that smells so good that you want to eat it serves an important role in the kitchen, namely by centering us around the idea of joy and potential that a kitchen should convey.

Yet if you told people, “you should organize your kitchen around one cabinet that just smells good enough to eat,” they would look at you like you had an arrow going through your skull. Humans do not recognize fragrant cabinets as a type of order.

Through this same weakness, Leftism rots our societies from the top downward. It appeals to our sense of what is good and fair play, according to a group of humans, in defiance of what has worked in the past.

Sensible people acknowledge that most people operate with little agency despite their bold show of demonstrating as much choice as possible. Human individuals do what brings them power, significance, and popularity, since these terms — in human minds — convert to one another.

For this reason, sensible people associate fair play with accepting that each person — with a few exceptions — will act in such a way to maximize personal wealth, power, and prestige at the expense of everyone else. We believe in strong power to limit abuses, which are the norm.

Leftism posits that we remove restrictions from everyone and, in the absence of a need to struggle over power and wealth, people will encounter a Utopian pluralism where they all agree to disagree and simply live in their own little bubbles.

This produces an image of a psychotic society in our minds if we look at it in isolation, but seems to solve the “problem” of conflict, at least in the minds of the neurotic. In reality, Leftism serves merely to defend the individual Leftism against critique by others — a type of “conflict” — so that this person can enjoy the benefits of civilization while working against it.

Behind the goodness and altruism hallmark of Leftism it conceals a desire not so much for power but the absence of risk, doubt, and the possibility of being wrong (and therefore, through social pressure, facing natural selection). Leftism reacts to social pressure as an enemy, suppressing it so that the individual alone is sovereign in his little bubble.

We humans fear natural selection more than we fear death, because with natural selection, we lose social esteem as well. We become remembered as he who lost, not he who did good. We fear social loss even after death so much we would choose certain death over the chance of loss.

From this comes the human obsession with control, which is the act of asserting the organization of our minds upon the world, instead of acting within the framework of the organization of the world in order to achieve what we desire. Control means regulating method so that things which threaten us cannot arise.

In contrast to this, the Everything Cabinet shows us the order of nature, which is to concentrate intense things in order to open up new pathways and make life more grand, beautiful, intense, and elegant.

Thanks to my experience with it, I have begun to reorganize the kitchen much as a small child would. There are areas for containers, for sharp things, and for the pans that you can do anything with. Then everything else is squirreled away somewhere where it can be pluralistically pacifistic.

This new kitchen reflects how we use it, more than how we would order it if we wanted neat tidy holes for everything. Humans, after all, have a tendency to obsess about death, and from that fear insist on dividing life into even squares of a matrix, organizing to control not to use.

It seems that as in everything else, the kitchen is less symbolic than a flow chart of how we operate. In the midst of this, the Everything Cabinet prompts us to take a moment to reflect on its beauties and the joy we might discover, instead of the doubt, fear, and resentment.