Modern life is a place of illusions, missing information and increasingly miniscule individual roles in society helping to keep our understanding of reality as a whole system at bay. Among these many misperceptions is the Civilizing Effect.

Society provides a market, people wander in, money crosses the point of sale, an item magically appears as if by conjuration and everyone is happy. But, much is hidden from the consumer. The total cost is not summed up on the price tag of a given item for sale.

Groceries are one example. Industrialized farming and product distribution relies heavily on fossil fuels, a byproduct of our diplomatic and military might; our taxes at work.

Agriculture itself transforms fertile land from self-sustaining biosphere into an artificially sustained cropland patchwork of less fertility. With its constant expansion, planet Earth is moved aside to make way for a costly and redundant human monoculture.

With profit as the driving force behind modern agriculture, crop yield must be maximized. Pesticides come into use to keep insect and disease predators in check. These poisons act like nerve-attacking agents that accumulate and persist in the environment.

In our panic to stuff every belly on the planet, we make ourselves sick with crippling neurological disorders. But, even as it dawns on us that our first snappy technological fix was in fact a bust, we have genetically modified crops with all its missing information to the rescue.

“Used widely in the United States from the 1950s through the 1970s in agriculture, the chemical was also found until fairly recently in the insecticide lindane, used as a treatment to kill fleas and ticks on pets and lice in humans. Even if you’ve never treated a dog or cat with lindane or worked in agriculture, the odds are you’ve still been exposed to the toxin. Banned in the l970s, B-HCH is a dangerous contaminant that won’t go away — it is still found as a contaminant in water and soil.

Now a team of researchers have found it in human blood. What’s more, they’ve identified elevated serum levels of the pesticide in patients with Parkinson’s disease, strongly raising the possibility this specific pesticide is tied in to the development of PD.”

Soil fertility on such land is propped up by a manmade crutch called fertilizer. This fertilizer, which changes the natural fertility cycle into a cycle dependent on the reapplication of fertilizers also turns into a runoff pollutant that enters fresh water courses.

Since streams and rivers are bound for civil populace consumption, we have water treatment facilities. These facilities have their own operating costs, an expense that is roughly kept in check for a while by having non-stop growth of paying recipients.

The majority of consumers only see what they immediately pay. But, that $3.49 loaf of bread was more than just compensation for its production and distribution.

It came at the cost of biodiversity now lost to future generations because their predecessors demanded constant, instant gratification and endless growth to keep prices low. Everyone could have as much of anything as they desired. All they ever saw were some digits on a price tag stuck to a plastic package.

“But in the past three centuries, exponential human population growth has led to a 500% expansion in the extent of cropland and pasture world-wide (see box 1, figure a). In Europe and North America, unchecked agricultural development has already transformed many natural habitats and depleted their biodiversity. Similar transformation is now underway in the tropics, where most of the worldâ€™s biodiversity is found, with huge implications for both wildlife populations and ecosystem functioning. Endemic Bird Areas (EBAs), globally important centres of biodiversity, are under above-average threat from agricultural expansion (box 1, figure b). As tropical forests are the predominant natural habitat in EBAs, this tells us that they too are particularly threatened by agriculture.” 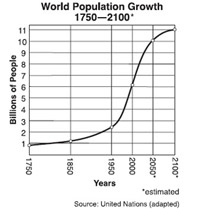 Maybe it was the prior centuries of mass deaths from wars and famines that have caused a more destructive humanist overreaction where we are bound for more of the same, but on a global scale.

Unlike so many species that thanks to our careless expansion have recently vanished, mankind was never endangered in the past, leading us to understand our overreaction is irrational.

Following the age of industrialization and emotional panic, world population on its tiny incline suddenly shot straight upward. Now it is clear that excessive food production is not needed for anything and is costing us dearly.

“Over the past 20 years a dramatic transition has altered the diet and health of hundreds of millions of people across the Third World. For most developing nations, obesity has emerged as a more serious health threat than hunger. In countries such as Mexico, Egypt and South Africa, more than half the adults are either overweight (possessing a body mass index, or BMI, of 25 or higher) or obese (possessing a BMI of 30 or higher). In virtually all of Latin America and much of the Middle East and North Africa, at least one out of four adults is overweight.”

The proposed global Carbon Tax to prevent climate change and thus human deaths has been making headlines. This idea is like trimming a tree by clipping only one outer branch.

The trunk, our overproduction of food, is an insane reaction against our fantasy of too many human deaths.

The trunk is where a more effective control mechanism can be applied. One proposal is to apply a tax at the mass industrial food production source and let the damage mitigation flow outward to all points from that primary source point.

The Carbon Tax controls only an end point far from primary sources of output, only adjustable after damage along the way has occurred.

Worse, the Carbon Tax only indirectly impacts, and only after the fact, so many of the symptoms outlined above that are caused by overproducing: pollution, overpopulation, obesity, poisoning people, destruction of the biosphere and the dieoff of species.

Simplicity: The First Step Toward Something Better | The marketplace versus the bureaucrats