Simplicity: The First Step Toward Something Better

In the modern age, simplifying one’s life can be defined in many ways. What is one simplifying? Is it melodrama between family members? Perhaps it’s reducing debt; or better, not chasing after that extra shiny gadget that will undoubtedly carry a high price tag in the form of interest financing for years to come? Maybe it’s reality – that is, stripping away the layers of nonsense in modern society and looking at life in the most objective manner possible?

The last point is a bit advanced for many, so some observe the most basic interactions between people in first world society – economics – and start there:

Our decision to sell our 4-bedroom house and move to a 2-bedroom rental probably perplexes many people, but I’m finding there are many who do understand. Right now, I cannot say that we are truly simplifying our lives–as the stress of a new job and moving, along with our tantrum-happy toddler makes life anything but less complicated. But we are finding ourselves re-examining some key values and liking what we are finding.

Much of what some people describe as voluntary simplicity calls to me and my family. Unfortunately, it is a topic risky with implicit comparison and judgement against those who have and spend more money. But I’m not saying we are “better,” it’s just that we have found our priorities shifting and the stark contrast around us makes us more aware of how much we used to take for granted. A movement with a catchy name like “voluntary simplicity” shouldn’t be necessary to address the reality that we all shouldn’t – and can’t – live like people do on HGTV, where trendy couples pick at the most minute details of a huge four bedroom home instead of paying attention to how to raise the family inside it (Jon & Kate, anyone?). The writer focuses on his family’s journey from being a cookie-cutter American family to voluntarily keeping spending low and having kids share rooms. If that’s what’s needed to ensure you’re not racking up credit card debt to buy necessities, that’s a wonderful and mature decision. If you’re doing it despite the fact that you have plenty of money to buy a nice spot of land and build a solid house on it with plenty of room, then this “voluntary simplicity” idea misses the point. 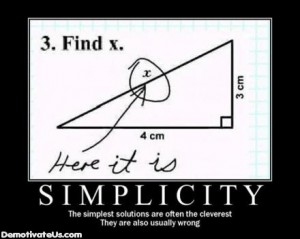 The writer chooses to have his kids share a room, and chooses to live in an apartment complex instead of a single family home, even though it appears he can afford it comfortably. Instead of controlling himself and his family in terms of how much they spend on what, he’s taken that choice away by living in a smaller space where they can’t load up with lots of stuff, and he indicates this has enlightened him to a point where he doesn’t need it anymore. On the one hand, I’m tempted to say, “bravo”, for forsaking modern living and taking up less space than in a McMansion. But the reality is that one can live in a large home and still have healthy ideals; it’s a sign of weakness if one voluntarily removes oneself from that lifestyle because it’s too tempting to “keep up with the Joneses”. Truly simplifying one’s life involves shedding theÂ want for the SUV loaded up with crap from Home Depot in the first place; notÂ oversocializing your kids for the sake of playground politics; cutting out the needless drama in one’s life/family; mending fences with old friends who share similar ideals but who have been alienated by your lack of time for them. Simplicity is just the first step toward a fulfilling lifestyle, but the writer unfortunately treats simplicity as an end in itself. If it were only so “simple”.